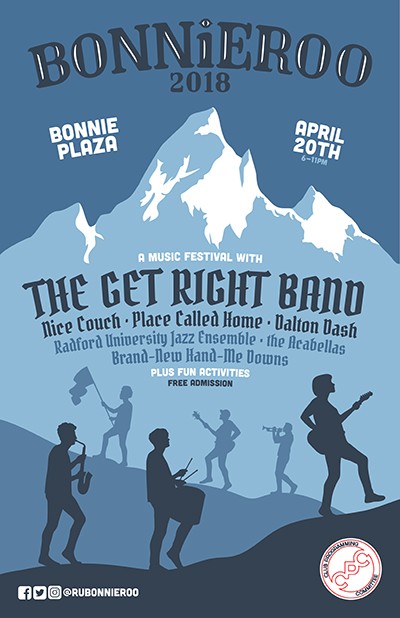 On Friday April 20, 2018 at 6:00 p.m. the Bonnieroo music festival will bring a free evening of fun and entertainment to the Radford University campus. The event will feature performances by local and national acts in the Bonnie Plaza between Trinkle Hall and the Hurlburt Student Center. Nice Couch, Place Called Home, Dalton Dash, Radford University Jazz Ensemble, The Acabellas and Brand-New Hand-Me Downs are among the lineup of acts slated to perform.

The progressive funk group The Get Right Band, currently on tour in the Northeastern U.S., will be making a stop at Radford to headline the festival. Relix writer Lee Zimmerman described them as “capable of veering from rock to reggae with occasional detours toward funk and blues with ease.”

Now in its ninth year, Bonnieroo is a live event run by music business students. It provides students in the field with opportunities to learn the business of planning a music festival. “Students are faced with hands-on experiences such as concert promotion, artist contracts, event planning, recording, and mixing and mastering that will directly prepare them for the work force,” said Fiona O’Brien, a double-major in music business and dance who serves as the festival president.