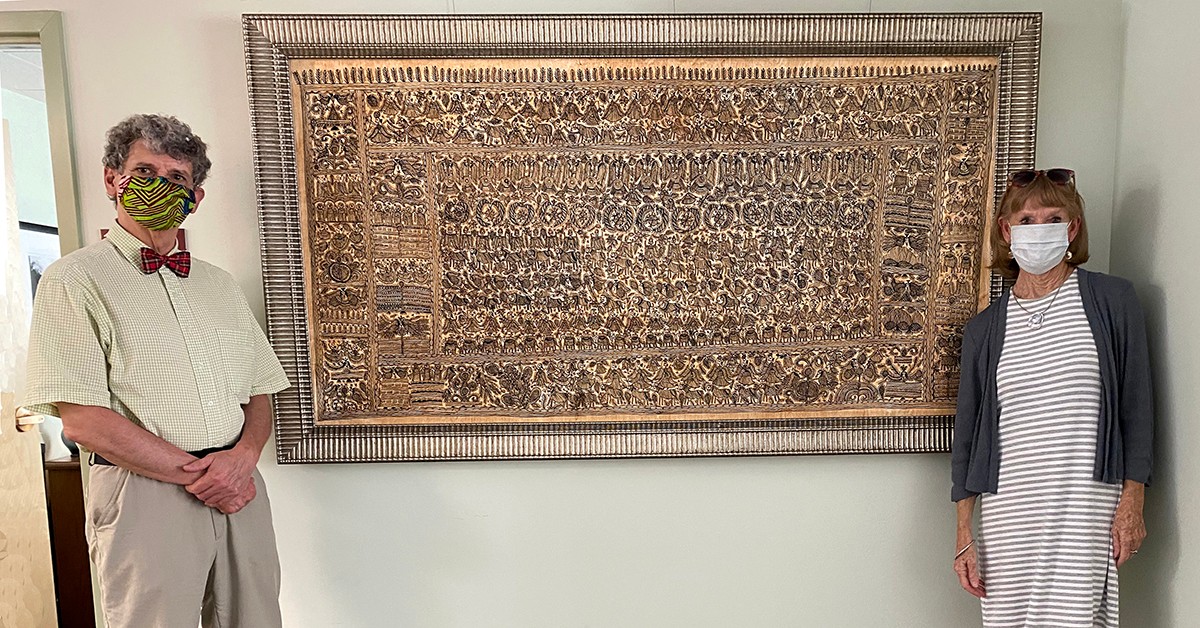 Radford University Art Museum Director Dr. Steve Arbury (left) and CVPA Dean Margaret Devaney (right) pose beside "Dusadh Procession," a painting by Dalit artist Urmila Devi. Recently donated to the museum, the painting will eventually be on display in the Center for Adaptive Innovation and Creativity.

This summer the Radford University Art Museum was pleased to receive a donation of twenty-three paintings from the Mithila region of northern India. The collection includes Dalit artist Urmila Devi's "Dusadh Procession" (above), which was acquired in memory of Norma L. Bowles through a donation made by the Community Foundation of the New River Valley. The work of art is being temporarily displayed in the dean’s suite at the College of Visual and Performing Arts, but plans are for it to eventually be on permanent display in the Center for Adaptive Innovation and Creativity. 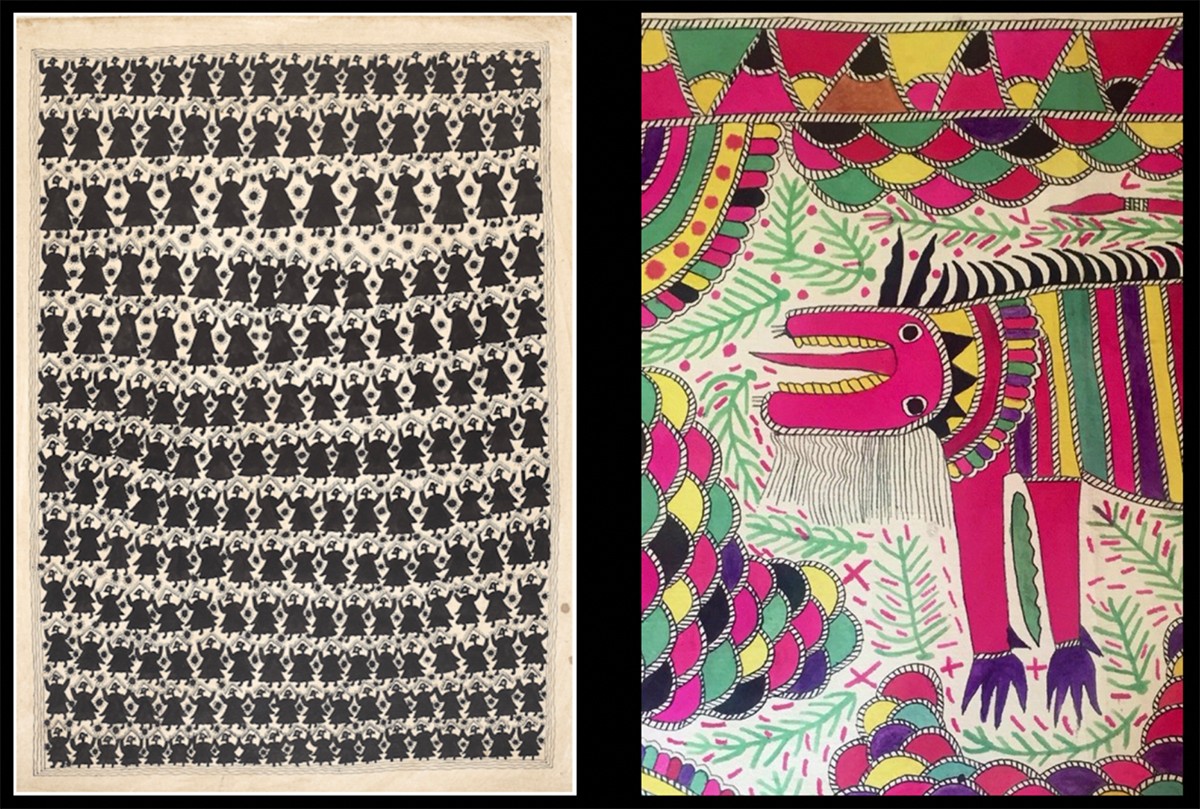 Chano Devi's "The Ghosts of Raja Salhesh" (left) and a detail of Jamuna Devi's "Tiger Hunting" (right). Both paintings are now part of the Radford University Art Museum's permanent collection.

The planned exhibits will focus on the Dalit myths and artistry of Mithila, a region in northeast India that includes parts of southeast Nepal. The region is famous for both ancient and contemporary arts and culture. However, while Dalit communities total over two hundred million people - roughly 16% of India’s population - their artwork remains largely overlooked. Starting in the 1970s, Mithila’s Dalit artists began painting on paper in figurative styles based on traditional tattoos, murals and bas-relief clay sculpture. They specialized in depictions of daily life, nature, and distinctive rituals and myths relating to the worship of their deities, especially Suriya (the sun) and their divine hero Raja Salhesh, about whom little has been documented or published until the 2019 release of Martine le Coz’s 238 page book “Le Roi De La Montagne: L’Épopée du Roi Salhesh” (The King of the Mountain: The Epic of Raja Salhesh).

Among the donated works are several paintings by Martine le Coz, who, in 2016, was inducted into the Legion of Honor, France’s highest order of merit for both civil and military conduct. Le Coz is cherished in France as the author of numerous novels and other publications. Since 2013, she has published four books inspired by Mithila art and culture containing exquisite, original illustrations that have not been exhibited. Some of the donated works include le Coz’s portraits of artists who advised her on Dalit art, mythology and traditions. 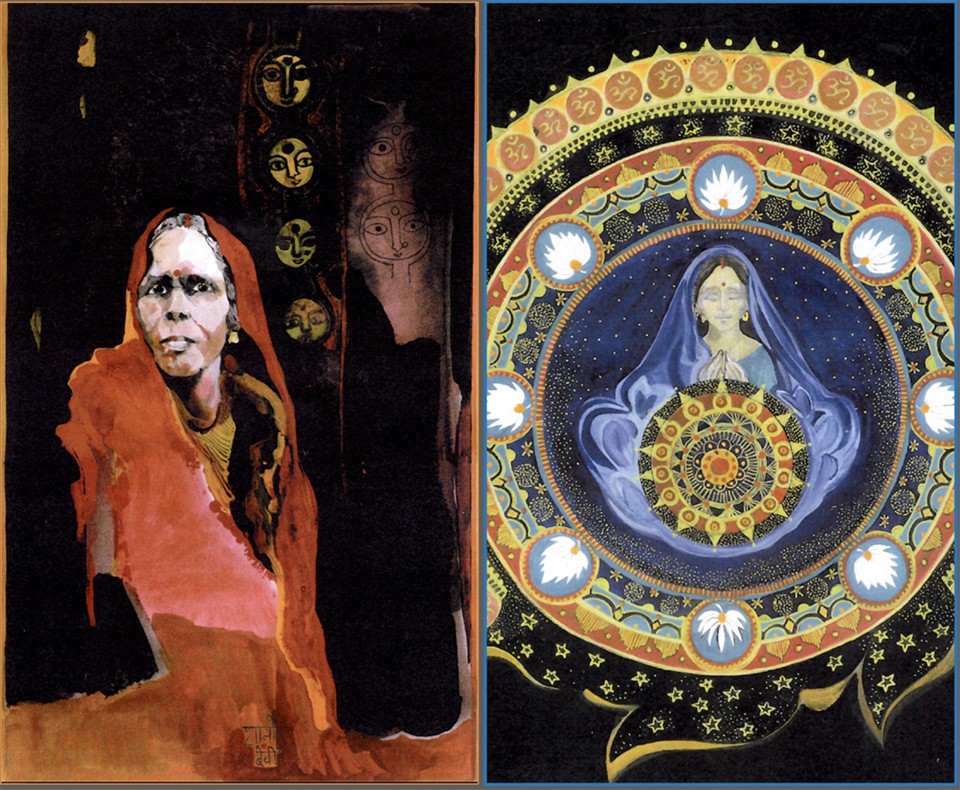 Details of portraits of Chano Devi (left) and Urmila Devi (right), by Martine le Coz. The paintings are planned for inclusion in the 2022 exhibition.

The two exhibitions planned for the autumn of 2022 will complement each other in various ways. The museum’s Tyler Gallery will display Martine le Coz’s Mithila-inspired illustrations including a selection of those accompanying her retelling of the Raja Salhesh epic, an A-B-C book illustrating India’s Devanagiri alphabet. It will also feature her portraits of such Dalit artists as Chano Devi, Urmila Devi and Abhilasha Kumari. The Covington Gallery will display over fifty examples of paintings by master Dalit artists, including Jamuna Devi, Uttam Prasad Paswan, Lalita Devi, Naresh Paswan, Ranjit Paswan and Shrawan Paswan. Shown together, these exhibitions will be the first to focus on Mithila’s Dalit mythology and artists as depicted by their own original paintings and through the illustrations of one of France’s leading contemporary authors.

An inaugural symposium honoring Mithila's Dalit painters is planned to kick off the exhibitions, complete with an illustrated catalogue of scholarly essays by David L. Szanton, Wendy Doniger, Hélène Fleury, Kaushik Kumar Jha and John H. Bowles. It will include recognition of the Ethnic Arts Foundation, which will be celebrating forty-two years of advancing the scholarly study and public appreciation of contemporary Mithila art.