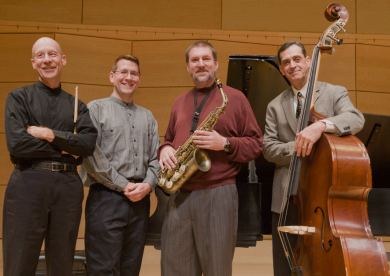 Joseph P. Scartelli, Ph.D., received his undergraduate degree in music education from Mansfield University (PA) and the Master of Music in Music Therapy and Ph.D. in music education/therapy from the University of Miami, Coral Gables, Florida. He has worked as a public school instrumental music teacher in Pennsylvania and Florida and as a music therapist with a cerebral palsy, socially maladjusted, and developmentally delayed children and adult populations. From 1981 through 1989, he held the position of Program Director of Music Therapy at Radford University. Since 1988, he has served as the Dean of the College of Visual and Performing Arts and Professor of Music. In December, 2009, he accepted the position of Interim Provost and Vice President for Academic Affairs at Radford University, returning to the Dean of the CVPA in July, 2011. Prior to his work at Radford, he was Director of the Music Therapy program at the University of Miami.

In addition to numerous scholarly publications, presentations and workshops, he currently holds membership on the editorial board of The Arts in Psychotherapy and recently completed a ten-year term (limit) on the editorial board of the Journal of Music Therapy, the primary scholarly publication in his field. He is the recipient of a Virginia Board of Education Resolution of Recognition for his work with the Radford University Summer Arts Conservatory, the American Music Therapy Association National Award of Merit, two Distinguished Alumni awards from Mansfield University, the Radford Chamber of Commerce Educator of the Year Award, as well as a variety of Who’s Who recognitions. He is a member of Pi Kappa Lambda and Phi Mu Alpha national music honors societies. He has also served and continues to serve on local and regional boards of directors for a variety of volunteer, professional, and service organizations.

He has worked as a professional musician in orchestras, show and jazz bands for over 45 years and regularly performs as a bassist with the RU Faculty Jazz Quartet.