Past Director of Choral Activities
Associate Professor of Music 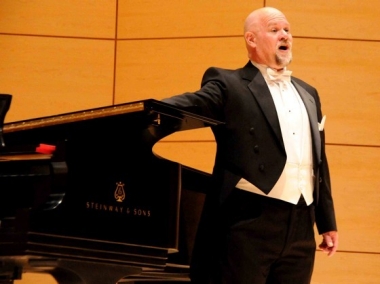 In addition to his university responsibilities, David Castonguay is the director of the Virginia Governor’s School for the Visual and Performing Arts. This program, funded by the Virginia Department of Education annually selects 200 high school sophomore and junior artists, dancers, instrumentalists, singers, and thespians through intensive competitive auditions. These students spend one month in a residency program at Radford University engaged in exploring and expanding their personal creativity in a synergistic community of learners.

Castonguay has conducted festival choirs throughout the United States and has presented workshops for the American Choral Directors Association, AGO and NAfME.  Castonguay’s choirs have toured Russia, Israel and most of Europe.

Castonguay continues to serve as a juror and master class clinician for three international choral competitions: Christmas in Russia held in Yekaterinburg, Russia; the Martinu Festival in Pardubice, Czech Republic and the Cornwall International Male Choir Festival in Truro, United Kingdom. Castonguay returned to Russia in September of 2010 on a U. S. State Department Fulbright and McGlothlen Foundation grant presenting master classes and public concerts with university and professional choirs in the cities of Ryazan, Izhevsk, Yekaterinburg and Votkinsk.

In December 2011, Professor Castonguay was awarded a major Fulbright grant by the U.S. State Department to fund a choir tour to Russia in April 2012. This Fulbright grant was associated with major grants by the Sverdlovsk Philharmonia and the Ural Federal University which funded the choir’s living and travel expenses while in Russia for two weeks. In addition to teaching master classes at Russian pedagogical universities and conservatories on American choral music and vocal pedagogy, the Radford University Madrigal Singers presented concerts at two international choral festivals and competitions: the Ural State Federal University Boris Yeltsin Festival for Academic Choirs and the Earth is Our Common Home. The choir returned from Russia with First Place Diplomas in three categories and the Grand Prix in the category of university mixed choirs.

Professor Castonguay is also a soloist in recital and oratorio, performing regular recitals of art songs. He studied voice and vocal literature in private lessons with distinguished American singers Blake Stern and William Warfield, as well as master classes with international singing stars Elly Ameling, Arleen Auger and Sherrill Milnes. Castonguay has a strong interest in contemporary music. He has premiered works by Milton Babbitt, Ned Rorem and Charles Whittenberg. Castonguay has also been selected to appear as a member of the Robert Shaw Festival Singers. Castonguay regularly presents master classes in vocal technique, solo vocal literature and song interpretation.

As a scholar, Castonguay’s articles on choral music, choral techniques and literature are published in professional journals in the US. Castonguay has published hundreds of editions of Renaissance, Baroque, Classical and Romantic choral music by Brahms, Byrd, Gesualdo, Handel, Haydn, Monteverdi, Ockeghem, Schubert and dozens of other composers. Many of the editions of foreign language works are published with a transliteration of lyrics in the voice parts in International Phonetic Alphabet to facilitate ease of learning by younger singers.

Over the past few years Castonguay has been studying the manuscripts of Igor Stravinsky’s "Les Noces (Svadebka)," which are held in the British Library in London and The Paul Sacher Stifftung in Basel, Switzerland. His new edition fixes the hundreds of errors found in the published score of this landmark ballet for four pianos, choir and percussion. Castonguay’s new edition will be published during the summer of 2016.

Most of Castonguay’s professional career has focused on training generations of new choral conductors.  He has concentrated on developing classroom materials to enhance the education of new musicians.  In 2008 he published an innovative computer program to promote music literacy through individualized sight singing training Student Initiated Sight Singing.  Due to its ease of use SISS gained wide acceptance and has been adopted for use by scores of school systems in Virginia and New England.  A vastly enhanced program, SISS Version II was released in September of 2010. In 2015 SISS Version II.5 will be released with greatly enhanced functionality for self-instruction of sight singing and solfeggio.  Also in 2016 he will publish a new computer program designed to revolutionize ear training and error detection training for young choral conductors.