Discover our guitar studio at Radford University, under the direction of Dr. Robert Trent.

Membership in the Radford University Guitar Ensemble is required of guitar students in the guitar studio and is open to minors and non-majors by audition. Its purpose is to building sight-reading, ensemble skills and finally performance skills. The ensemble performs both on and off-campus and is directed by Robert Trent.

The Guitar Ensemble has performed throughout the Mid-Atlantic states from Maryland to North Carolina and was selected by the Guitar Foundation of America to perform at its Washington, DC Conference - Strathmore Performing Arts Center. Performances have often involved singers and other instrumentalists and in past years the Radford University Guitar Ensemble has collaborated with students in the department of dance. 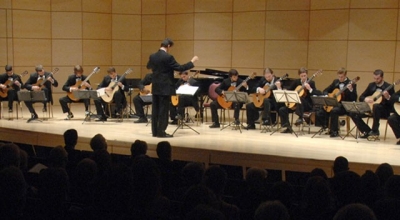 Students are invited to audition for the RU Honor’s Guitar Quartet and whose members often tour with Dr. Trent

"It is my philosophy that true musical solidity can be inculcated via a chamber music approach, whereby 'leaders' change within the group varying from piece to piece. It is a difficult interdependency, but one which begins to form security both individually and collectively.”


Students also have the opportunity to learn from the many guest artists throughout the year including the Radford University International Guitar Festival.

Visit our Guitar Studio under the direction of Dr. Robert Trent