*NOTE* Out of abundance of caution for our campus and our community patrons this event has been CANCELLED.  Thank you for your understanding during this unpresidented time.

The 19th Annual Radford University International Guitar Festival will bring internationally noted Guitarist performers to the sonic splendor of the Davis Performance Hall in the Covington Center for Visual and Performing Arts, April 3 - 4, 2020.

The International Guitar Festival has consistently drawn an audience to the New River Valley from NorthernVirginia as well as beyond the borders of the Commonwealth of Virginia, including Maryland, North Carolina and as far north as New York State.

ALL EVENTS ARE FREE and are held at the Covington Center for Visual and Performing Arts on the campus of Radford University, Radford, VA (corner of Jefferson and Main Sts. Radford, VA 24142). Click here for parking information.

ALL EVENTS ARE FREE and are held at the Covington Center for Visual and Performing Arts on the campus of Radford University, Radford, VA (corner of Jefferson and Main Sts. Radford, VA 24142). Click here for parking information. 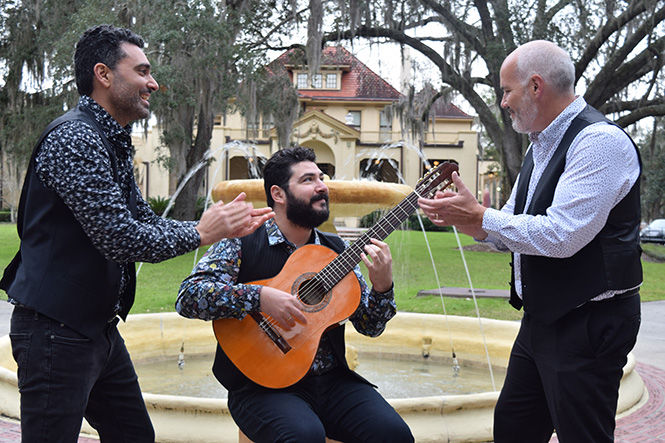 Guitarist and composer Jorge Caballero is the youngest musician and the only guitarist to win the Naumburg International Competition Award, one of the most prestigious and coveted awards given to performers of any instrument, and comparable to the Pulitzer Prize for musicians. He is also the recipient of top prizes at the Tokyo International Guitar Competition, the Luis Sigall Competition, and the First Latin American Guitar Competition. Known for his dazzling virtuosity and his intense musicality, Mr. Caballero is widely regarded as one of the finest guitarists in history. Jon Pareles of the New York Times called him a "masterly guitarist" and praised his "meticulous balance and chameleonic timbres."

Mr. Caballero has performed as a soloist with the Los Angeles Philharmonic, the Orchestra of St. Luke's, the New York Chamber Symphony, the Naples Philharmonic and the Presidential Symphony of Ankara, Turkey, among others. His recital appearances include performances at New York's Alice Tully Hall, the Library of Congress in Washington (in the historic Great Performers Series), the Metropolitan Museum of Art, the Palace of Fine Arts in San Francisco and others. Recent performances include recitals in Europe, Asia and the Americas. Mr. Caballero was also featured as the center artist for the production of "Austin Pictures," one of the largest events ever produced featuring a solo classical guitar. The production took place at the Austin City Limits Live Theater and it involved visual arts, film, and Mr. Caballero's performance of Modest Mussorgsky's iconic work "Pictures at an Exhibition." The show was broadcasted live on National Public Radio (KUT 90.5 FM Austin), and on KLRU (PBS) National Television later.

Mr. Caballero's recordings, which include arrangements for solo guitar of Antonín Dvorâk's "New World" Symphony and Mussorgsky's Pictures at an Exhibition, make him one of only two guitarists in the world to perform and record these monumental works. His Musical Heritage CD of Bach Cello Suites, recorded in 2000, was highly praised by critics, drawing comparisons to Casals, Rostropovich and Segovia. In addition to these recordings, as was his most recent album, titled "Albéniz," featuring adaptations of works from Isaac Albéniz' famed suite Iberia. Mr. Caballero has also recently recorded Rimsky - Korsakov's Capriccio Espagnol and "Albéniz," which feature his arrangements of selected works from Iberia. Mr. Caballero also recorded videos for the Metropolitan Museum of Art, playing the 1940 Hauser I guitar formerly played by the English guitarist Julian Bream.

A native of Lima, Peru, Mr. Caballero comes from a musical family. His mother is a well-known singer in Peru and as a child he spent many evenings sitting backstage at her concerts. He began his studies at the National Conservatory in Lima, although he had already absorbed much knowledge about the instrument from listening to his father give lessons. Growing up at a time when terrorists in Peru bombed electrical stations, he became an expert at practicing in the dark. He later studied in the United States, where he attended the Manhattan School of Music.

Mr. Caballero's repertoire is notable for its breadth and scope: When he applied to the conservatory, his teacher suggested that perhaps he should list the pieces that he did not play, since there were so few of them. It ranges from Renaissance works for the vihuela to modern composers like Carter, Berio and Ferneyhough. He is also known for his arrangements of orchestral and piano works, including Alban Berg's Piano Sonata Op. 1, widely regarded as some of the most important contributions made to the classical guitar repertoire in recent history.

The Mayes classical guitar duo brings together a wealth of experience and ability, gathered during extensive careers as soloists and members of respected ensembles.  Their programs are remarkably diverse both in style and instrumentation.  Along with 20th Century classical guitars, they often mix into their performances terz guitar, 19th century guitar, renaissance guitar, renaissance lute, archlute and the Neapolitan mandolin.

The duo enjoys engaging with current composers to create new music for their instruments.  In 2010, the duo included in their Carnegie Hall concert the premier of three new works; Ron McFarlane’s contemporary lute duo “On the Heath”,  Roger Hudson’s “The Sayings of Yogi Berra” for two guitars and voice, and Howard Vance’s “Shenandoah” for two guitars.

They have recorded three CD’s together: “The Schoole of Musicke”, “Sketches for Two” and “Romance”.   Joseph Mayes has recorded 4 solo CD’s of both guitar and lute music and Kathleen Mayes has released one solo CD of guitar music, “Music from the Bistro”.

Joseph Mayes has performed extensively throughout the United States and Europe on both guitar and lute.  He is a professor of music at Rowan University where he heads the Guitar and Early Music programs and holds degrees from Thomas Edison College and Shenandoah University.  He is well known, not only as a performer, but as an outstanding source of guitar scholarship witnessed in his many publications in both periodicals and music publishing houses.  He has studied with some of the most notable guitarists of the century including Andres Segovia, Carlos Barbosa-Lima, and Jose Tomas.

Both Joseph and Kathleen are proud of the fine guitar program at Rowan University and thoroughly enjoy the process of working with their talented students.

Ingrid Riollot taught for 15 years in French Music Conservatories: Albertville, Nancy, L’Hay-Les-Roses and Montbeliard where she was the Head of guitar studies and in Geneva Studio Kodaly, Switzerland.

Ingrid and Damon Smallman give lectures and demonstrations about history, construction and design of Smallman guitars.

Ingrid Riollot started learning music at 6 years old and classical guitar at 8 with Isabelle Regis-Touvron. She graduated from the Conservatoire National de Region de Musiaue et de danse de Lyon where she earned all the distinctions with the highest rewards. She received a “Special Prize” from The Société Philharmonique de Lyon given to the youngest talented graduates. She continued her post-graduated studies in Barcelona under Ricardo Gallen. She studied with Jésus Casto-Balbi, Joaquin Clerch, Marco Tamayo, Gerard Abiton, Costas Cotsiolis, Eric & Marc Franceries, Alberto Ponce among others.  She holds all the French pedagogy diplomas for being guitar Professor.

Since 2019, she is dedicating her time performing, giving masterclasses and being part of jury competitions. Currently, she plays on a 2019 Greg Smallman and Sons Damon & Kym guitar. She is sponsored by Savarez. She is the Sponsor of Mauritius Classical Guitar Society, She is President of the French Guitar Society. She lives in Australia.

Winner of the Artists International Auditions (New York), Concorso Sor (Rome), Prémio Jovens Músicos (Lisbon) and an award winner at various competitions including those of Salieri-Zinetti, Paris, Montélimar, Valencia and Sernancelhe, Pedro Rodrigues began his musical studies at 5 years of age and, at 8 years, his guitar studies with José Mesquita Lopes at the Escola de Música do Orfeão de Leiria where he concluded his studies with full marks as a scholarship student of the Fundação Calouste Gulbenkian. He participated in masterclasses with David Russell, Leo Brouwer, Joaquin Clerch and Darko Petrinjiak. Pedro later studied with Alberto Ponce at the École Normale de Musique de Paris where he completed the “Diplomes Supérieures de Concertiste” in Chamber Music and in Guitar, graduating with full marks from a unanimous jury in the latter. Under the academic supervision of Paulo Vaz de Carvalho and Alberto Ponce, with a scholarship from the Fundação para a Ciência e Tecnologia, in 2011 Pedro completed his PhD in Music at the University of Aveiro. He has performed as a soloist at Carnegie Hall in New York, Salle Cortot in Paris, the National Concert Hall of Taipei, Ateneo in Madrid, the Sala Manuel de Falla of Madrid, Endler Hall in Cape Town, India International Centre of New Delhi, the Sala Raúl Juliá in San Juan, and in Portugal, the Centro Cultural de Belem, Casa da Música and the Grande Auditório da Fundação Gulbenkian. He played in festivals such as Mikulov, Paris, Santo Tirso, Sernancelhe, Caruso Festival, Forfest Kromeriz, Vital Medeiros among others. Pedro has premiered more than 60 works by important portuguese composers, such as João Pedro Oliveira, Cândido Lima, Isabel Soveral, Sara Carvalho, Sérgio Azevedo, José Luís Ferreira, António Sousa Dias and Carlos Caires. Many of these works were dedicated to him.

Pedro has recorded for RTP, RDP, RTM, SABC, Cesky Rozhlas and WIPR, and has recorded CDs with Numérica, Nuova Venezia, Portugaler, Slovartmusic and JNS Music. He has performed as a soloist with various orchestras, including Orquestra Gulbenkian, Filarmonia das Beiras, Orquestra do Algarve and the Orquestra de Câmara de Cascais and Oeiras. Pedro is frequently invited to give masterclasses at conservatoires and universities in Europe, North and South America, Africa and Asia. His transcriptions and editions are published by Mel Bay Publications, AVA Editions and Notação XXI. As a researcher, he has presented his work at conferences in England, Brazil and Portugal, with his research interests focusing on education, transcription and contemporary music. He recently created and presented the programme “Seis Cordas Para Um País”, transmitted by Antena 2. He is currently an integrated researcher at INET-md and an assistant professor at the Department of Communication and Art of the University of Aveiro.