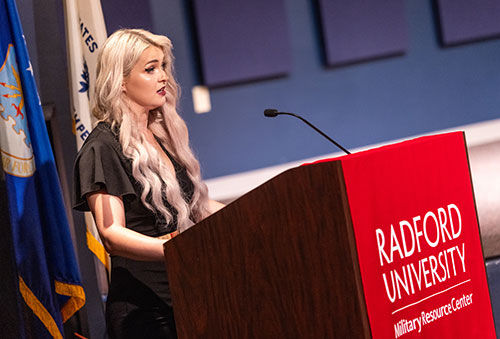 Radford University saluted U.S. military veterans on Nov. 11, 2022, with a special on-campus ceremony that included guest speakers, songs and stories about the importance and impact of service to the country.

Throughout the hourlong ceremony inside the Bonnie Hurlburt Student Center auditorium, speakers shared anecdotes of their own military service experiences as well as the service commitments of friends and family who have served as an inspiration.

Among those speakers was Sarah Schafer, a U.S. Air Force veteran and current Radford criminal justice major, who, before the event began, sang a beautiful rendition of “The Star-Spangled Banner.”

“Some of you may have met Sarah, the Radford University criminal justice senior, or Sarah, the occasional national anthem singer,” she said. “But I'd like to introduce to you Sarah, the veteran who only a year and a half ago went by the name Staff Sgt. Sarah Schafer. I served six years active duty in Air Force Security Forces.”

She is the daughter of two Air Force veterans, Schafer explained, “who instilled in me diligence and patriotism, and I will forever be thankful to follow in their footsteps. My story is just one among the many, many exceptional veterans that we have amongst us today.”

Speaking with gratitude for Radford University and its Military Resource Center, Schafer referred to both “as a space for us to have a community.”

The Radford University Military Resource Center serves student veterans, active military and reserve members, spouses and military dependents. The center has students, faculty and staff who are veterans and willing to assist other student veterans with obtaining benefits and finding academic and student life resources.

Students had a large presence in the ceremony, from speaking to introducing guests to the posting of the colors by the U.S. Army ROTC cadets. Student Isabella Stinson sang an emotional rendition of “An American Soldier” to honor her father, who served 21 years in the Air Force. “I wouldn’t be where I am without him,” she said.

Virginia House Del. Jason Ballard thanked those in the gathering for “coming together to pay tribute to the many men and women for their service” to their county. “You truly are our country’s greatest collective trait,” said Ballard, a U.S. Army veteran and Bronze Star recipient.

Ballard said he held a “deep appreciation and admiration” for everyone who has served in the military.

“And, to those who have supported our men and women in uniform,” he said, “I am personally grateful to you.”

Radford University Professor of Criminal Justice and Marine Corps veteran Roberto Santos, Ph.D., said the lessons he learned in the military are still at the core of “who I am.”

Those who have served understand this, he said.

Jim Newman, Ph.D., chair of Radford’s Department of Recreation, Parks and Tourism and a U.S. Air Force veteran, encouraged those in the audience to support student veterans “so they can continue their missions of serving and giving back to their communities in their new chosen careers,” he said.

One way of offering financial support is through the Lewis Sparks and Ken Coan Veterans Award, which Newman established in honor of his grandfather, Lewis, who served as a combat engineer in Germany during World War II, and his uncle, Ken, who served in Vietnam.

Both, Newman said, “continued a life of service after their military service when they no longer wore the uniform.”