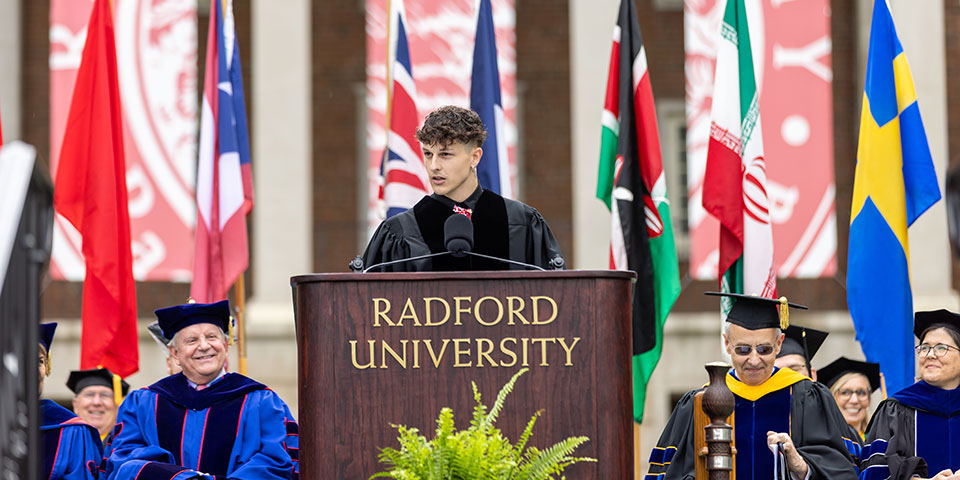 “Be the best Highlander you can be.”

Those were the words alumnus Nick Mayhugh ’18 left with Radford University graduation candidates as they eagerly awaited receiving their degrees Saturday during spring commencement ceremonies May 7, 2022 on Moffett Lawn.

Combined with the Graduation and Hooding Ceremony for students of the College of Graduate Studies and Research the night before, Radford University conferred degrees on 1,621 undergraduate and graduate students from main campus and Radford University Carilion (RUC).

Mayhugh, who won three gold medals in the Paralympic Games in Tokyo in August 2021, delivered the keynote address under gray, rain-threatening skies at Saturday morning’s ceremony. He offered an inspirational message to the class of 2022, speaking about his journey from being diagnosed with and overcoming a mild form of cerebral palsy and his transition from Highlander soccer player standout to an international track star.

Mayhugh instructed graduates to always be working to better themselves, just as he has done throughout his life.

“After you walk across the stage today, each of you will face life-defining moments,” said the 26-year-old Mayhugh, who admitted to being more nervous in the moment than he was on the starting blocks at the Paralympic races in Tokyo.

“Opportunities will come and go, the road you're on now and may not meet the goals you want to set,” he said, standing in front of 23 flags from nations that represent the homelands of Highlander graduates. “And, you may need to change directions to get there. That's okay. Accept the challenge, believe you will be successful and do everything in your power to get to where you want to be.”

Those are values he learned at Radford University, Mayhugh explained.

“Radford believed in me. Radford pushed me. Radford made me a better man,” he said. The university, gave him opportunities, such as playing Division I soccer, that doctors told him post-diagnoses that he would never do again.

“It was here at Radford that I was allowed to take the next step toward becoming the man and athlete I am today,” Mayhugh said. “And, the best Highlander I can be.”

Before Mayhugh’s speech, Radford University interim President Carolyn Ringer Lepre, Ph.D., spoke to the gathering of graduates, families and friends, which filled almost the entirety of Moffett Lawn, saying “this is a life-changing moment for all of our graduates and a day of justly deserved celebration. It is also a day to celebrate those who have supported our graduates on their journey to this stage.”

Lepre recognized the university’s 437 first-generation college graduates. “You have laid the foundation for future generations,” she said. The interim president also recognized those new graduates who are legacy, meaning at least one of their family members is a Radford alumnus. “We thank you for making Radford University a family tradition,” Lepre said.

Radford University Board of Visitors Rector Robert A. Archer congratulated the graduates and explained that “this is one accomplishment that no one can take away, and the degree you have earned here at Radford will serve you well the rest of your life.”

Faculty Senate President Katie Hilden, Ph.D. told the graduates that she and her fellow faculty members were “incredibly proud” of them.

“You are here today because of your hard work, perseverance and passion,” Hilden continued.

“Congratulations to all of you. You made it!” said Price, a Washington, D.C.-based social entrepreneur who leads a retail incubator that supports nearly a thousand entrepreneurs. “You not only made it through all of the classes and the papers and the exams, but I want to you take a moment to acknowledge that you did it with the weight that you have felt over these last two years.”

Price is a “very proud first-generation graduate,” she noted while explaining that her “parents’ minds would be blown if they knew I was here sending off the next class of graduates at the university they were so proud for me to attend.”

Offering advice, Price told the graduates that “finding yourself and meaningful work is a beautiful journey. Forget the titles. Forget the salaries,” she said, “and look for what lights you up. When you are doing something you love, something you feel confident doing, you feel fulfilled doing, you sparkle.”

Colleen McNickle ’20, M.S. ’22 took the stage to introduce Price, but before doing so, spoke to her fellow graduates about the time and effort it has taken for them to earn their well-deserved degrees.

“Graduating with a doctoral or graduate degree is no small feat,” McNickle said. “All of those long nights, the imposter syndrome, the long talks with professors, the hours spent researching, reading, writing and then probably reading some more — all seemed very stressful at the time. But, now it seems so worth it.”

Other commencement ceremonies Friday included the ROTC (Reserve Officers’ Training Corps) commissioning of 11 cadets into the United States Army. “This is an exciting day. Not only are you about to graduate from Radford University, but you are also going to become commissioned officers in the United States Army,” said guest speaker Retired Brig. Gen. James Bienlien ’90.

Pinning ceremonies were held Friday for graduates in the School of Nursing and the Doctor of Physical Therapy (DPT) program. One of those DPT graduates, Alina Shockley of Roanoke, Virginia and originally from Moscow, Russia, already had job offers waiting for her, she said. She praised Radford’s DPT program and credited her success to Radford’s small class sizes, the knowledgeable faculty and their willingness to work with students. “They have an open-door policy and they are always there to help,” Shockley said as her 6-year-old daughter, Anna, stood by her side before the ceremony.

Among the outstanding class was Grace Green, a member of the women’s volleyball team, who was honored with the Greig Denny Award, which goes to a Radford University senior student-athlete who has excelled in academics, as well as athletics, and has made significant contributions to the community.

Also on Friday, an outstanding 32 Radford University Honors College graduates were presented medallions in Covington Hall for their exceptional work during their time at the university. Twenty-five of the 32 Honors College graduates were named Highlander Honors Scholars, which is the highest academic distinction bestowed on Radford undergraduates. The students completed a 27-credit honors curriculum, publicly presented a scholarly capstone project, and achieved a GPA of 3.5 or greater.

One student in particular, Courtney Streeby, earned the King Award of Scholarly Excellence and Honors. The award is given to a graduating senior in the Honors College whose Honors capstone and career exemplify outstanding achievement in scholarship for his or her discipline.

The Center for Diversity and Inclusion held a Multicultural Congratulatory Ceremony in the Bondurant Auditorium on Friday evening to wrap up the day’s events.

On Thursday, May 5, the Occupational Therapy Assistant (OTA) program held its pinning ceremony at the Vinton War Memorial in Vinton, Virginia. Seventeen OTA students were recognized during the ceremony where they heard from featured guest speaker Karen Layman, COTA/L, a retired occupational therapist and academic fieldwork coordinator for the program.

Several students were singled out for their exemplary academic achievements in the program, including Hannah Beasley, who received the Kirsten Akehurst Scholarship Award; Laken Thompson, who received the Academic Excellence Award; and Ashley King and Betsy Loeschen, who were both recognized with the Travis Nichols OTA Exemplar Award. The ceremony ended with the graduates and faculty reciting the pledge of a healthcare professional together. 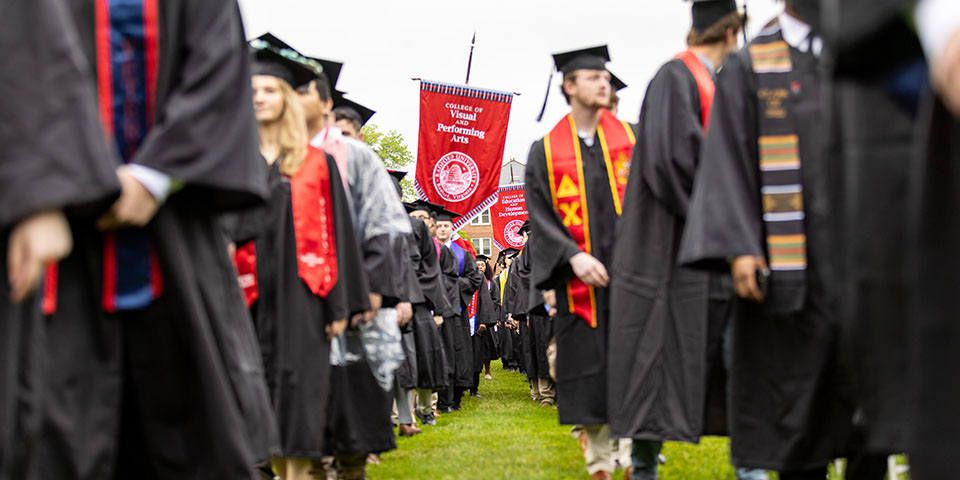 Criminal Justice major Vladimir Perez was among those 437 first-generation graduates Lepre mentioned on Saturday. He was excited to be graduating “in general” but also proud to be setting a positive example for his cousins and younger members of his family.

“Graduating from Radford University specifically has taught me so much and brought me to a new environment that I personally was not used to back home, being a first-generation student,” said Perez, a Fredericksburg, Virginia native whose family lives in Mexico.

“I think Radford is a perfect size that is not too small nor too big and it delivers lots of extracurricular activities to get involved in outside of schoolwork,” he explained. “Also, Radford University has given me lots of hands-on experiences that I feel are going to be very useful, and Radford has put me in communication with many people in my career path that are helping me along the way to pursue my goal.”

Mikayla Cashwell, a sociology major from Amherst, Virginia, with minors in women and gender studies and psychology, was Radford University’s youngest graduate this spring at age 19.

“Graduating college is challenging at any age and this has been far from easy,” said Cashwell, who plans to be advocate for minority students in underrepresented neighborhoods and help with education reform. “I know my degree from here at Radford University has pushed me in the right direction of where I want my life to lead.”

Sydney Braham said she was excited to graduate, but sad to leave Radford. “It’s bittersweet,” she said.

“I have had the best four years here, and the faculty is to credit for a lot of that,” said the legacy graduate and Virginia Beach native, whose parents are also Radford alumni.  “The opportunities I have had are something, I know for a fact, I would not have had anywhere else, and I am so beyond grateful.”

Pete Campbell ’92, a board member of the Alumni Association, was on hand Saturday to watch his son, Carter Campbell, receive his Bachelor of Business Administration degree in management.

The elder Campbell helped start The Honor Fund, which recognizes graduate students who are making strides as first responders, or in the military, and he said he found it thoroughly gratifying to watch his son follow in his footsteps as a Highlander.

“I couldn’t be prouder,” Pete Campbell said before the ceremony began, adding that his son’s girlfriend is a Radford senior who will graduate in nursing, later this year.

Campbell, who currently resides in Virginia Beach, said his mother lives in the New River Valley, and someday he plans to return as well, but for good.

“Radford is a second home to us, and when I retire, this will be home,” he explained.

His undergraduate work now behind him, the younger Campbell plans to attend a program with the Professional Golfers’ Association, to complete his master’s and achieve PGA certification.

“I’m just going to enjoy it, enjoy one week off, before I start again working on my master’s, on my golf management degree,” said Carter Campbell said as he stood in line, waiting to take the stage and accept his diploma. “It’s kind of weird, honestly. It doesn’t feel real, but I’m excited for it,”

Nicholas and Joy Dillard, of Woodford, Virginia, traveled from Caroline County for the ceremony. Their daughter, Chassidy Dillard, received her Bachelor of Social Work, which her mother said she intends to use to help others.

“It’s a special day, all around,” Nicholas Dillard noted, even beneath the gray-smeared skies from which rain had been forecast to fall. While conditions remained relatively dry, Dillard gestured to the still-closed umbrella in one hand and noted, “We came prepared.”