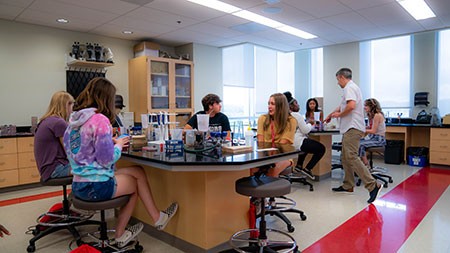 After two days on campus, Deandre Granberry had a warm, easy feeling that Radford University would be the place where he could begin building a rock-solid foundation for his future.

The recent graduate of Kipp College Preparatory in Washington, D.C., examined scores of schools where he could further his academic pursuits — like studying geology and climate change — and during his research, it became crystal clear that Radford would be the best fit for him.

“One thing that stood out to me about Radford was how close-knit it was,” said Granberry as he sat inside Peters Hall with his sister, Lacaya Granberry, and grandmother, Neysha Abbott. “It’s like a community of people getting to know each other and making a ton of friends and relationships.”

Deandre Granberry visited Radford in July during one of the university’s numerous two-day Quest sessions. Quest is the university’s signature new student and transfer orientation program, organized by the Office of New Student and Family Programs.

The Quest program offers information and activities for incoming students and their families to learn more about Radford University. This year, seven, two-day Freshman Quest sessions and one, two-day Transfer Quest session ran from July 6-31. Three transfer Quests were offered in late June and early July.

Day One for freshman Quest began in the mornings with participants gathered in Bondurant Auditorium, where various Radford family members welcomed them to campus, including interim President Carolyn Ringer Lepre, Ph.D.

“This caring community will support you as you pursue your undergraduate degree and set a strong foundation for your future,” Lepre said at one of the Quest openings in mid-July. “I am confident that you will make lifelong friends and make incredible memories while developing vast knowledge and critical skills in your chosen areas.”

The first-day welcoming also included current Radford students — the very helpful Quest staff — acting out a play they wrote, “Scenes from a Freshman Year,” which delves into stories about their Radford experiences.

“I especially liked those student stories because, as parents who have a kid coming to college here, we’re always a little nervous,” said George England of Boynton Beach, Florida, who along with his wife, Linda, has a son, Joseph England, who will be attending Radford in the fall. “Those stories, and all the other information we heard, were very helpful.”

Following the welcomes and introductions, students, led by Quest Assistants, ventured off to familiarize themselves with campus buildings and resources, met faculty members through the new Becoming a Highlander sessions, registered for fall courses and participated in fun activities where they were encouraged to meet new people and begin forming friendships.

“I just came back from an academic advising session where I picked out classes that were recommended for the fall semester of my freshman year,” said incoming freshman Rebecca Schwarz of Herndon, Virginia, who plans to major in psychology. “So, I feel a lot more confident that I’ll actually know what I'm doing when I come back for classes this fall.”

Quest was beneficial to Schwarz, too, because she “got to figure out where everything is,” she explained. “Now, I know where Floyd Hall is, which is where I'm staying, and I know where Hemphill Hall is, and this has really helped me.”

The same was true for Aanyah Lambert of Virginia Beach, who attended transfer Quest and is planning to major in psychology at Radford and working toward a career as a criminal psychologist. “Quest has been great,” she said. “I learned who my advisor is, where my building (residence hall) is and where my classes are.

“Plus, I learned Radford has a bomb courtroom,” she said excitedly, referring to the courtroom inside Hemphill Hall, one of many on-campus learning spaces designed to simulate a professional work environment.

“We want to help them feel confident and at ease here and let them know that they have made the right decision,” Sgarrella explained. “So, by the time they leave to go back home, they feel more at ease, they are excited to come back in the fall, they have started to make some connections and they have had their questions answered. And, of course, they leave and go back home with their full course schedule. We want them to get excited to be a Highlander and welcome them to the Highlander family.”

While the Questies — a term of affection for the incoming students – made preparations, so did their family members, who throughout the day learned more about financial aid, student affairs, career development and campus affairs.

“It has been fantastic,” said Rob Guenther of Annapolis, Maryland, whose daughter Caitlyn Guenther will be a freshman in the fall.

“The energy and enthusiasm are No. 1 for me,” Rob Guenther said, standing alongside his wife, Julie, after lunch at Dalton Hall. “From the time we stepped on the Radford University campus, there were two Quest students standing there with the big red foam fingers and big smiles, waving us in. Everyone has been so friendly and so energetic and so positive. And, the level of information has been right on the mark.”

That’s the job of the Quest Assistant, explained Ty Davis, a rising junior political science major from Norfolk, Virginia. She became a Quest Assistant because she had “such a great experience” at Quest when she was a freshman.

Overall, Deandre Granberry’s Quest experience was “a 10 out of 10,” he said, soon before making his way back home for a few more weeks of summer. “They forced us out of our shells and helped us not be introverts anymore and let us express ourselves.”

For his grandmother, Neysha Abbott, the Quest experience was impressive, she said, as she watched Dandre find a comfort zone on campus and saw her granddaughter, a rising high school senior, develop an interest in the university.

“I loved the focus they had on helping the students become the young men and women that they really want to be in life,” Abbott said. “It was just a beautiful overall experience for me.”