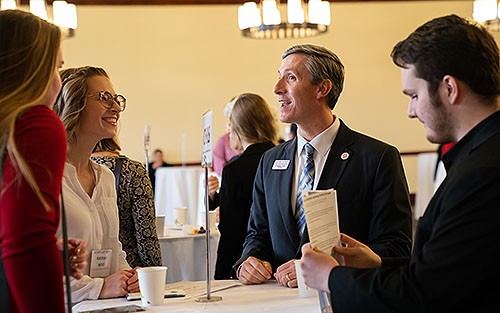 Radford University honored the 711 freshmen and new transfer students who made the Dean’s List for the fall 2018 semester with a reception Feb. 15 in Kyle Hall.

Those are a few of the main ingredients it takes to be a successful student and earn a coveted spot on Radford University’s Dean’s List. That’s according to students in attendance at a Feb. 15 reception to honor the 711 freshmen and new transfer students who made the list for the fall 2018 semester.

“It’s a lot of long hours of studying. I’ve spent a lot of time in McConnell Library and in the College of Humanities and Behavioral Sciences Building,” said Brittany Summers, a junior psychology major from Fairfax. “But it’s worth it. I’m excited and my parents are really proud of me.”

Summers was talking with a group of fellow Dean’s List members in the Kyle Hall multipurpose room as they waited for the reception to begin. One of those in the group was Summer Brewster of Rural Retreat. She spoke about the joy of earning her way on to the esteemed list and what it means to the people who support her academic pursuits.

“It’s awesome to be on the Dean’s List,” Brewster said. “I’m a first-generation college student, and it’s an important accomplishment for me and my family. They’re proud of me.”

The Dean’s List is the most prestigious academic recognition Radford University students can receive for their performance during a semester. To make the list, students must have at least 12 semester hours of coursework graded A-F, earn a GPA of at least 3.4 for all courses not graded on a pass-fail basis, obtain no grade lower than C, and have no incomplete grades.

At the reception, students had an opportunity to mingle, meet the deans from the respective colleges and pose for group photos.

The Office of the Provost, New Student and Family Programs and the Office of Student Success and Retention sponsored the reception.

“Earning a place on the Dean’s List should be a source of personal pride for you. I hope that you share today’s celebration, especially all of your photos, with your family, with your friends and your supporters,” Colley said. “Please accept my congratulations and my best wishes for you, for your continued success and your personal achievement while you’re here at Radford University.”

For Diana McDavis, making the Dean’s List is “encouragement to continue to work hard,” the freshman physics major from Hampton said. McDavis shared a table at the reception with Michael Benson, a junior from Christiansburg who is majoring in information systems and security.

Benson said it was an honor to be included on the Dean’s List, particularly after all the effort he has put forth toward his academic studies. One of the most important elements of his success is planning, he said.

For Zahna Jones, learning that she had made the Dean’s List was an exhilarating moment.

The freshman from Richmond came to Radford University because she wanted to study at a university where she could complete her undergraduate degree and then pursue a master’s degree in occupational therapy. Making the Dean’s List was one of her most pressing goals after she chose Radford.

“I was like, “Whoa!” she said, describing the moment she learned about securing a place on the Dean’s List. “I had to put in a lot of hard work to make it. It’s nice to be a part of this group.”