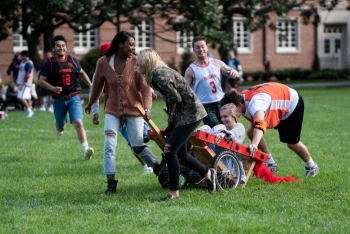 The Greek Life chariot races at 2018 Homecoming and Family Weekend.

The sites, smells and sounds around campus the weekend of Oct. 19-21 could mean only one thing at Radford University: Fall Homecoming and Reunion Weekend, as well as Family Weekend.

More than 1,000 alumni, friends and families of current students returned to Radford for fun and festive events that rekindled memories for some and inspired new traditions for others.

Hundreds of alumni sprawled across Moffett Lawn, which had been transformed into the Alumni and Family Village. On one end, dozens of tents representing sororities, fraternities, clubs and organizations drew passersby as they reminisced.

“Everything is quite different,” said Alda Draper ’66. “I came back for my 10th reunion, and then I didn’t come back until my Golden Reunion a few years ago. Since then, I make sure to come back every year for Homecoming. All of the changes to the campus, to Homecoming weekend, it’s an improvement.”

“I come back every year to see what changes have been made,” said Jennifer Watkins ’98. “The campus, the buildings, it’s beautiful.”

“I’m here both as an alum and as family, since my son is now a sophomore here. I hadn’t been back to campus before last year and I’m just amazed by everything that is going on. I’m really impressed with everything,” said Jackie Miller ’87.

On the other end of Moffett Lawn, alumni and current students competed in a lacrosse match, while Greek Life members participated in chariot races.

The winner of this year’s Greek Life Challenge, which supports fraternity and sorority life programming and scholarships, was Phi Kappa Sigma. They raised $5,000 from 71 donors. The entire competition raised just under $13,000 from 223 donors.

“This win means a lot,” said Phi Kappa Sigma member Ryan Eisnaugle ’20. “It’s more than just the money - it’s how many people are willing to help us be successful. People that aren’t even members of the fraternity: friends, parents and wives. It is good to see that support. I mean, $5,000 is a lot of money to be raised by a chapter of 18 guys.”

The winner of the Spirit Rock, bestowed upon the organization with the best decorated tent, was Sigma Phi Epsilon.

Kate Brekke, her daughter, Maura, and husband, Tron, laughed and clapped as the four-legged friends did their best to impress the audience.

“My husband and I always look forward to this,” Brekke said. “We come every year.”

Kate Brekke said she enjoyed the spirit of campus. Dad, on the other hand, said he enjoyed seeing where his daughter lives and making sure her place is clean, Tron Brekke joked.

“We are thrilled she went here,” Kate Brekke said. “There’s such a sense of community.”

“I love it,” she said. “I visited a lot of schools, but this is the one that has my heart.” 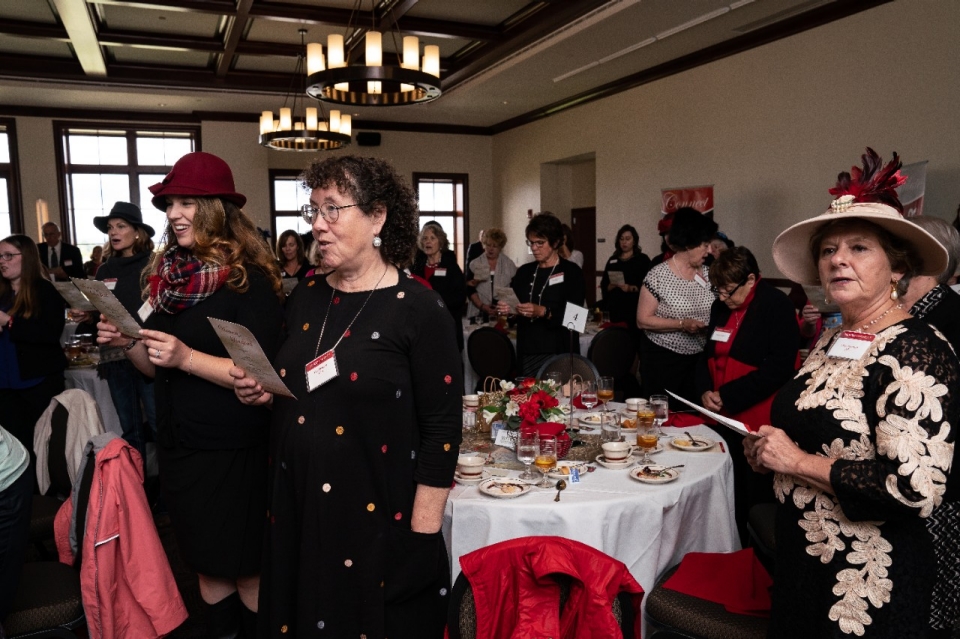 The 2018 Women of Radford Luncheon 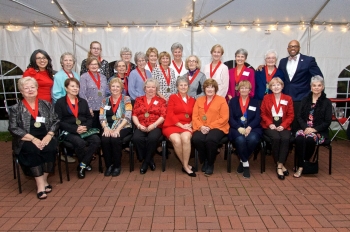 The Class of 1968 at the Golden Reunion Dinner.

At the 33rd annual Appalachian Folk Arts Festival, the smell of smoke and homemade goods complemented the folk music on stage.

Several vendors set up on Heth Lawn to showcase their skills and trades, ranging from blacksmithing, knitting and sewing, apple butter making and more.

On the way to the festival, Cindy Reynolds and her daughter, Radford student Samantha Johnson of Richmond, stopped at the new Highlander statue and bench outside of Russell Hall for a photo.

“I’d been curious about it,” said Johnson, who passed by the covered statue several times before it was officially revealed to the campus community on Oct. 19.

The statue was commissioned by Radford University’s Alumni Association and is now a permanent fixture on campus.

“We are very excited about this new addition to campus,” said Executive Director of Alumni Relations Laura Turk at the unveiling ceremony. “We look forward to starting a new tradition."

Generations of Radford University alumnae came together for the sixth annual Women of Radford luncheon in Kyle Hall. The “Grit, Grace and Gratitude” themed event welcomed more than 140 women and guests.

Alumnae and students from the classes of 1957 to 2022 reminisced about their days as Radford students and shared stories about campus life. Some expressed excitement about connecting each year for the event and catching up with old friends, while a few were back on campus for the first time since graduation and marveled at the changes and growth at the university.

The celebration and storytelling continued for many later that evening at the Golden Reunion Dinner at the Governor Tyler House, hosted by President Brian O. Hemphill and First Lady Marisela Rosas Hemphill. The event welcomed the Class of 1968 for its 50th anniversary.

“Friendships and a love of the campus are what bring me back,” said alumna Beth James ’68. “A group of us come back fairly often for reunions, functions and tours. We love Radford University.”

At the First Generation Luncheon in Muse, a new Family Weekend event, sophomore Raquel Resende of Roanoke and her parents, Dawn and Carlos, received a lot of helpful information, they said.

“It made me feel like I’m not alone here,” Resende said. “There are other first-generation students with questions and concerns like me. I learned about clubs I can join and others ways to make me feel more connected to campus.”

Radford’s robust art and music scene was on full display throughout the weekend as well.

An opening reception was held in the Covington Center Art Museum for a new exhibit featuring Vivianne Carey, Caroline Rust and Noor ul ain Zaib. The exhibit is a body of work that mirrors the intricacies of being a woman. Fall Dance Fest was held in Preston Hall’s Bondurant Auditorium and featured a wide variety of dance genres, including modern dance, classical ballet and jazz. Later in the evening, Radford’s talented fashion design students impressed at the annual Fall Fashion Show in the Bonnie Auditorium.

In Porterfield Hall, former WVRU DJs gathered to celebrate the 40th anniversary of the radio station.

“This station taught us how to do it right,” said James Riff ’88 of Giles. “It was the best-equipped radio station in Southwest Virginia. Dr. Dedmon [Radford University’s fourth president, 1972-94] loved this station, and we didn’t have to ask for much. We got everything we wanted and needed to be top-notch.”

As an aspiring broadcast communication major, Robert Langford ’88 produced jazz shows, was the vice president of the Broadcasters Guild and did work study for the university’s TV station.

“It was fun,” Langford said. “I liked getting my hands on things rather than just study all the time.”

Now an executive event and video producer for medical training, Langford has inspired his niece, Christiana Niosi, to follow in his footsteps. She hosts her own alternative rock show on Monday nights in the WVRU booth.

Thom Brewer ’87 of Lebanon said he once hosted the most popular show on campus, “Mahogany Perspective.”

“It was urban music…very out of my box,” said Brewer, recalling that in rural Lebanon, they mostly played country music on the radio. “But, it was a really great experience and definitely broadened our minds and perspectives.”