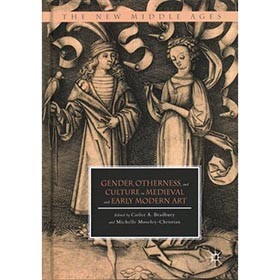 Bradbury teamed up with Virginia Tech’s Chair of Art History and Associate Professor of Art History, Medieval and Early Modern Studies Michelle Moseley-Christian to prepare the collection of essays that examines gender and otherness as tools to help understand medieval and early modern art, as well as the social environments in which the art was created.

Bradbury also contributed an essay, titled “Picturing Maternal Anxiety in the Miracle of the Jew of Bourges,” to the book’s collection of seven scholarly essays that analyze a wide variety of medieval and early-modern media, such as manuscripts, prints, paintings, metalwork, textiles and funerary sculpture.

“We knew people in our networks and used first or second degrees of separation in a community of people we enjoy and whom we got to know better in a lovely process of collaboration,” Bradbury said.

Bradbury said inclusion of “Gender, Otherness and Culture in Medieval and Early Modern Art” in the New Middle Ages Series is important as the series didn’t typically publish works on visual art or visual culture in such an illustrated volume.

“Palgrave Macmillan took a chance on us as art historians. They valued us and let the project evolve by connecting us with insightful reviewers who helped expand outside our realm,” Bradbury said.

Art history is a unique portal to the past, according to Bradbury.

“The visual experience can be pretty universal. Looking at a painting from a medieval prayer book, for example, we can make a connection to those who lived in a different time and place,” Bradbury said. “We get a sense of their fears and hopes and dreams.”