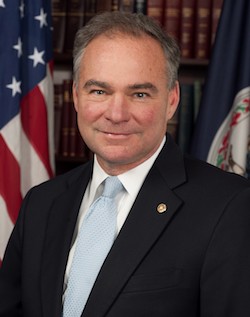 Radford University announced today that United States Senator Tim Kaine will serve as the keynote speaker for the 2018 Spring Commencement on Saturday, May 5, at 11:00 a.m. on the university’s Moffett Lawn. More than 1,700 students are expected to graduate.

“I’m thrilled to be a part of Radford University’s commencement,” said Senator Kaine. “For over a century, Radford has been an exceptional Virginia institution that has done tremendous work to educate students for success. It’s an honor to join the graduating class as we celebrate their accomplishments and send them off to the next chapter of opportunities.”

Kaine grew up working in his father’s ironworking shop in Kansas City. He was educated at the University of Missouri and Harvard Law School and started his public service career by taking a year off from Harvard to run a technical school founded by Jesuit missionaries in Honduras. After law school, he practiced law in Richmond for 17 years.

Kaine was first elected to public office in 1994, serving as a city councilmember and then Mayor of Richmond. He became Lieutenant Governor of Virginia in 2002 and was inaugurated as Virginia’s 70th Governor in 2006.

“Radford University is honored to celebrate the academic achievement and success of the Class of 2018 with Senator Tim Kaine,” said President Brian O. Hemphill.  “Senator Kaine’s reflections on leadership at the highest levels and service to the Commonwealth of Virginia and its citizens reflect Radford’s focus on teaching, research and service.”

Senator Kaine lives in Richmond with his wife, Anne Holton, who formerly served as Secretary of Education of the Commonwealth of Virginia.