Students, professors use dance to bring together patients and families

Students in the freshman seminar for dance course performed at the Carilion Clinic New River Valley Medical Center on Dec. 6, bringing together patients and families.

The decision to have the students perform was “serendipitous,” according to dance adjunct instructor Rachel Rugh. “Amy VanKirk and I were discussing our fall classes, and I mentioned that I'd love to have some Radford students come perform at the hospital as part of my artist residency there,” she said. Rugh is the current resident artist at Carilion Clinic through the Robert L.A. Keely Healing Arts Program, which aims to improve the health of patients, visitors and hospital staff.

The movement utilizes “repeated gestural material that evokes a feeling of boredom, exhaustion, and frustration juxtaposed with a slightly playful quality,” Rugh said. “Crossed legs, fidgeting hands, pushing hair out of one's face: these are all movements De Keersmaeker uses in her choreography that I had seen reflected in unguarded moments working with patients, families and staff in the hospital.” 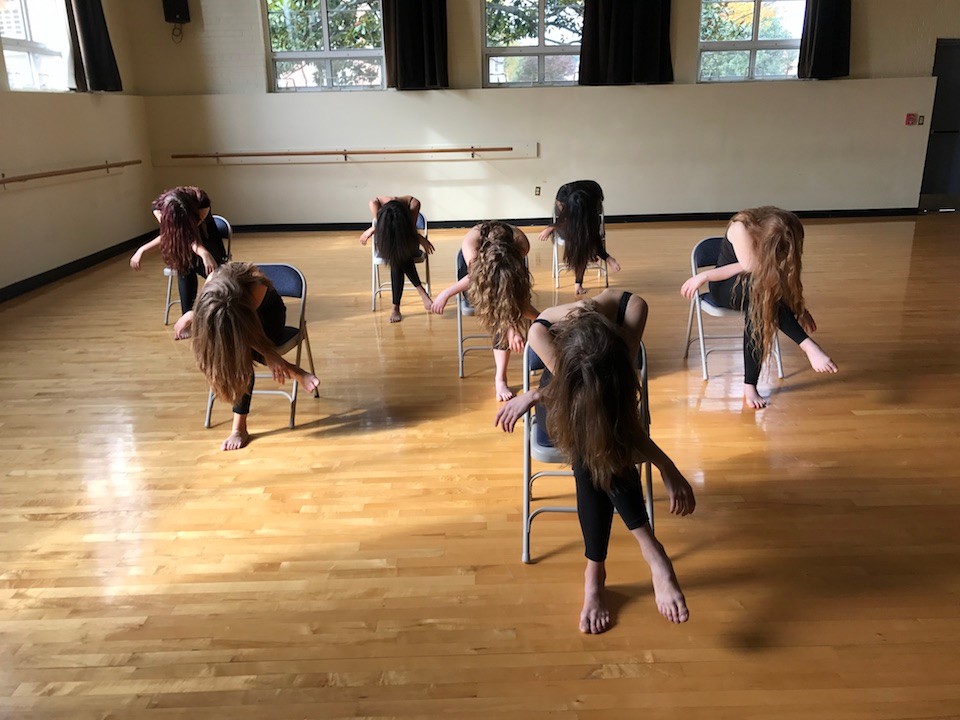 Students rehearsing the dance inspired by the Rosas Remix Project.

VanKirk, assistant professor of dance, and Rugh used “Rosas Danst Rosas” as the framework for the performance, which worked well with the freshman seminar curriculum.

Before starting rehearsal, students studied De Keersmaeker and the larger subject of postmodern dance in America and Europe. VanKirk said that the students grew as performers and creators throughout the process.

“The goal of this course is to build a sense of community for the dance majors and help ease their transition from high school to college,” she said. “Working on this project required the students to share their creative voices openly with each other and share leadership roles, which built a sense of trust in the classroom.”

The rehearsal provided students an important skill early on in their academic careers – active learning.

“Once they learned the initial series of six movement patterns, we gave the dancers a great deal of freedom to come up with their own ideas about how to arrange the movement vocabulary,” Rugh said. “This naturally led to conversations about composition, design and structure – all topics that they will delve into more deeply as they continue their choreographic studies as upperclassmen.”

Students were encouraged to expand upon the original material, such as adding in their own traveling phases and suggesting spatial and rhythmic patterns for the piece.

“As a result, the piece felt deeply personal to the dancers, and they took a great deal of ownership over the process and the final performance,” Rugh said. “Amy and I were thrilled by their commitment to the work, and by the warm reception that they received at the hospital.”