How a family escaped the Holocaust: Survivor Jay Ipson shares story at RU 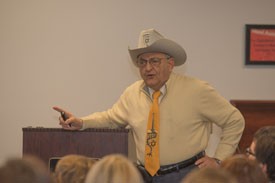 Holocaust survivor Jay Ipson visited the Radford University campus April 8, to share his story of how he, his mother and father escaped the occupying forces of Nazi Germany and hid for months in a potato hole his father dug by hand.

Invited to speak by Marcia Stone, a social work graduate student, Ipson engaged the capacity crowd of RU students, faculty and staff with stories about his time growing up in the Kovno Ghetto in Lithuania during the time of occupation.

Ipson's presentation was sponsored by R-SPaCE and coordinated by Anya Morgulis, advisor of the Hillel student group, Stone and Assistant Professor of Social Work Deneen Evans. More than 200 faculty, staff, and students supported the event, Evans and Stone said.

Displaying photos on the projector screen behind him throughout his presentation, Ipson shared gripping accounts of the atrocities against the Jewish people in his hometown. He spoke of the day his father, a lawyer, lied about his profession and escaped what would turn out to be the execution of white-collar workers.

In October 1943, Ipson and his mother, he said, were the only two survivors out of 5,000 people who had been rounded up by German soldiers to be deported for execution.

"When they (the soldiers) didn't make the quota, the number they wanted to deport, they started going house to house to take other people," Ipson recalled. "They came to our house." 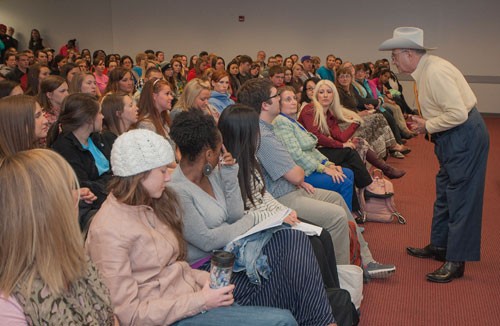 He said his grandparents, two uncles and an aunt were home from work at the time. Ipson and his mother were there, too. She was recovering from a head wound she received days earlier from the butt of a German soldier's rifle.

"They grabbed us up, pulled us out and put us in line," Ipson said, while pointing to a photograph on the screen from that day. It showed him, his mother and grandfather waiting to be deported.

"A Jewish policeman that was a friend of my father recognized me, grabbed me by the arm and said 'go home; your daddy will be looking for your when he comes home from work… and take your mother with you,'" Ipson recalled as the audience hung on every word. "My mother didn't want to leave her family. I started crying. I wanted to go to my father."

"My mother and I are the only two that survived out of all those people who were deported that day," he said.

Weeks later, Ipson told, his father orchestrated "in the middle of a November night" a daring escape out of the ghetto for his family. He said his father would listen for the patrolling guard's footsteps on the cobblestone streets. And when it appeared the guard had passed, "I was told to run out and hide across the street and hide behind the fence."

After the guard had made another pass, his mother fled to join her son. "In total darkness, how did my mother find me?" Ipson wondered. On the third pass, my father came out, found the two of us and we walked five blocks down that road to where a farmer was waiting for us with a wagon full of straw."

Ipson hid under the straw. His mother covered her face.

The Ipson family stayed with a Polish-Catholic farmer in a small house with a dirt floor with one bed where the farmer, his wife and son slept. "We had nothing to give them, and they didn't ask for anything," Ipson said. "They risked their lives to save ours."

Ipson's father knew the dangers for all involved if his family stayed in the house, so he asked the farmer for permission to build a hiding place in the farmer's potato field in the woods.

In the middle of the night, with the protection of a loyal German Shepherd, Ipson's father would go to the field and "with his bare hands and a stick, dig a hole and open up a chamber into another potato hole."

Ipson joked that his father was "no car mechanic, and he was no engineer, either," and said the hole caved in on his father and he was trapped. His German Shepherd began barking and the farmer's son ran and dug the dirt from Ipson's father's face so he could breathe.

Near the conclusion of his talk, Ipson, who came with his family to the United States in 1947 and is co-founder of the Virginia Holocaust Museum, showed a photo taken of him and his son visiting the opening of the potato hole in 2003. It looked about the same, he recalled.