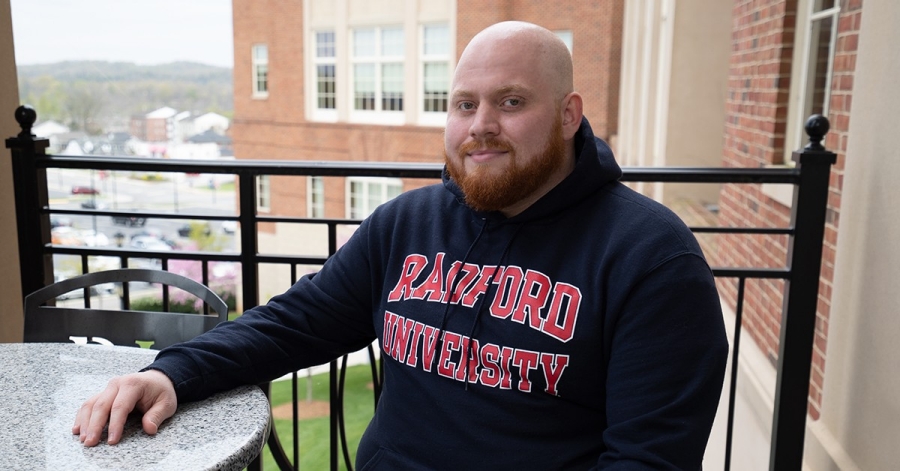 When five herniated disks confined him to a couch, Wes Spence had a lot of time to think about the future.

“I couldn’t walk for about six months,” Wes says, remembering the injury that sidelined him and kept him from his work as a pastor in Atlanta. He attended seminary and lived in the heart of the city through most of his 20s, working to help people in his community thrive.

But in an instant, everything changed.

One day, hours after moving into a new apartment, severe back pain left Wes unable to move. In the weeks that followed, he made several difficult decisions; one was to relocate back home to Dublin, Virginia, where he had support from his family and friends.

“Doctors say I have degenerative disk disease that had been building, and moving that day was the straw that broke the camel’s back,” Wes says with a smile on his face, half joking.

He can laugh about it now — a little — but the “back injury really messed up my life,” he says. The pain and subsequent back surgery a few months ago, however, gave Wes time to reflect and think about a new career path that would allow him to follow his passions.

“I was just realizing where I have been the past 10 years of my life, what I have done and what I want to do,” Wes says, and then boldly he states, “I want to build a legacy of caring and compassion for my community.”

Wes has always had the heart and soul of an entrepreneur, wanting to own and run his own businesses, to “help people in dynamic ways,” he says. “I want to feed them, help give them homes, and I want to give them jobs.”

He has plans for owning rental properties and providing people with affordable housing, just like his grandparents do. And, it’s his dream to own and operate a food truck — “with good ole southern home cooking,” he asserts — which he was in the process of doing in Atlanta before his back gave out.

It’s been two years ago now since Wes found himself on his couch, contemplating his future. He thought then of going back to school but wondered, at age 30, if it were feasible to do so and work full time once he landed back on his feet.

“I realized that in four years, I’m going to be 34 years old,” Wes says. “I can either be 34 with a bachelor’s degree or 34 without a degree.” Working with that philosophy, he decided to give himself a chance and go back to school.

Wes first enrolled at New River Community College, and as he moved closer to earning his associate degree there, he began looking into business programs and found, through the help of counselors at New River, Radford University’s new online Bachelor of Business Administration (B.B.A.) degree offered through the Davis College of Business and Economics.

The B.B.A. online degree completion track is 100% online and is designed for adult learners with work, family and other commitments. Students enrolling in the program must have either completed a transferable associate degree or are within six credit hours of completing all general education requirements.

Wes enrolled in January 2021 and just finished his first semester at Radford. “It seemed to go really fast,” he says. “That’s probably because I’m going to school and working full time.”

The ultimate goal of the Davis College online B.B.A. degree completion program is to allow students to complete a degree without sacrificing their personal and professional responsibilities. The academic program provides students with the access, support and customizable options needed to complete a degree.

“The program’s flexibility, and the fact that it is entirely online, are ideal for students during this time when many people are taking courses and working from home,” reminds Davis College Dean Joy Bhadury, Ph.D.”

Davis College’s stellar reputation among business schools around the United States was a major selling point for Wes as he researched colleges and universities in Virginia before choosing Radford. Boosting that reputation is Davis College’s accreditation by AACSB International - The Association to Advance Collegiate Schools of Business for its undergraduate and graduate programs was a major selling point. Less than 5% of business schools in the world are AACSB accredited. “I was very intrigued,” he said, “when I read about the AACSB accreditation during my search for business schools.”

For Wes, “the Radford B.B.A. is great,” he says. “The professors are very helpful, and I love the program because it gives me the ability and convenience to manage my time and do things my way. I don’t have to fit a set class schedule into my day. That’s not feasible for an adult learner.”

There’s one more thing that drew him to Radford, he adds. “Growing up nearby, in Dublin, I always wanted to be a Highlander!”

To learn more about the program, contact Angela Stanton, Ph.D., Davis College of Business and Economics associate dean, at 540-831-5187 or onlinebba@radford.edu.