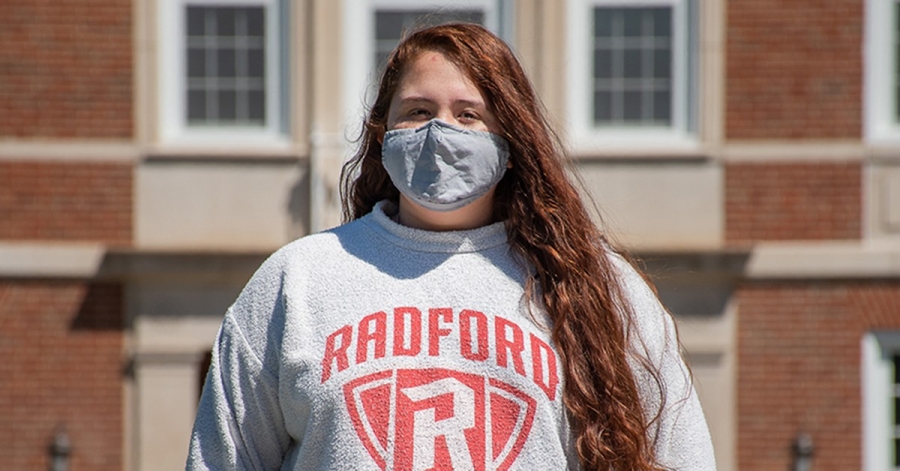 Born in Hawaii, Story and her family eventually settled in Fredericksburg, Virginia. Her father is a retired Marine, and her mother is a native of her Hawaiian birthplace.

In high school, Story said she initially didn’t know if she wanted to go to college. A friend, however, helped sway her decision.

“He was applying to Radford, and he loved it so much and was just so excited about going to college. I was like, ‘I want to feel that level of excitement,’” she said.

Story was sold. She applied and was accepted into Radford University during the spring semester of her senior year.

Story is majoring in computer science with concentrations in software engineering and databases. She is also earning a certificate in cybersecurity. Her choice of study came as no surprise to those who knew her. She’s been fascinated with computers since middle school. Then came the coding classes.

At Radford, Story has enjoyed small-scale and engaging classes.

“The classes are very practical and allow you to put into practice what you’re going to be doing in industry,” she said. “There are several classes in place to help you get internships and jobs after college. They really prepare you for your future.”

Story especially values the close connections she has formed with her professors.

“All of my professors know me, and we stay in touch even after I’ve taken their classes,” she said. “I can talk with them during office hours, and they always find time to answer my emails and make sure I’m getting good, detailed feedback on assignments.”

In particular, Story said senior instructor Shawn Brenneman has played a vital role in supporting her during her time at Radford.

“I had her my very first semester, and she was awesome,” Story said. “She’s been one of my job references. She’s written me letters of recommendation. “She’s just been on my side 100 percent.”

Brenneman was also one of the first people Story called to share some recent exciting news.

Story was offered a job with 1901 Group, a thriving cybersecurity and cloud technologies company based in Blacksburg, Virginia. She’s currently interning for the company and will start full-time after graduation.

“I’m excited and relieved and ready to start this new journey,” Story said.

With her time at Radford winding down, Story said she will miss the sense of community and the care she received while here.

“I have received so much support from all aspects of campus,” she said. “Between the Center for Accessibility Services, the Dean of Students office, Student Counseling Services and all of my professors … They are all so supportive and make sure you know that they’re there, and they’re willing and wanting to help students.”