Switching it up – for Kevin Meredith, it was career first, then a college degree

When Kevin Meredith graduated from Radford High School, it was 1990, and he didn’t really know what he wanted to do, but higher ed did not seem to be in the cards.

"I wasn't the best student, I didn't have loads of money, and I didn't have scholarships lined up,” he recently said, matter-of-factly. “So, I just went out into the working world."

While still a teen, Meredith enrolled in cosmetology courses and, less than a year later, emerged trained and certified to cut and style hair. He’d also found a clear path he would follow very successfully for decades.

"You get your license, and you go out into the world, and you're a professional. And it fed my creative needs," he explained.

A large bearded man, tall and broad-shouldered, Meredith nonetheless carries himself with a casual grace and a sense of the self-assurance that likely contributed to his decision, in 2007, to open his own Christiansburg salon, Meredith’s.

The business grew and more recently survived the not-inconsiderable hurdle of the COVID-19 pandemic, and today, a decade-and-a-half later, he manages a staff of about 15 employees. 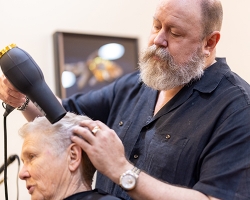 But as he was scaling his 40s, he recalled, "I had reached that point where the salon was running on its own steam. I'd been doing hair for 30 years, and I woke up one day and was like, ‘Maybe do something else?’ And I started thinking, 'What would that be?'

“My passion, the thing that really drives me and feeds me, is creating and working with the sewing machine, working with fabric. And I always thought that fashion design would have been an awesome career for me, but that wasn’t the path life took me on.”

It was around then, at age 45, that he decided to earn his Bachelor of Fine Arts degree in design with a focus on fashion.

Starting fresh as a Gen X undergraduate has its obstacles – “You have your whole life going on, and you have to fit college into that, which has been a challenge” – but it also came with some benefits. Virtually all his circumstances were different than they had been straight out of high school. Meredith had taught himself to run a business, was all-too-familiar with hard work, could pay his own freight and had found a starting line that was not far away at all.

“Having lived and worked most all my life in a college town, it was always kind of like, Radford's right there,” Meredith remembered.

He also had an ethos to follow, handed down from a reliable source.

“My great-grandmother once told me, when you stop learning, you die. She meant you die mentally. And I think that is so true,” he said. “The moment you decide you know all there is to know, you’re dead in the water, man.

“I truly believe I will be a lifelong learner,” he added.  “One of the great things about my experience here is that the professors, pretty much across the board, they really encourage that.”

Almost as an exhibit of physical evidence, Meredith during an interview last month carried with him a thick textbook, “Modern Fashion History,” with numerous colored Post-Its sprouting from within the tome’s hundreds and hundreds of pages. It was a gift from a former professor, Rebecca Dias, and the bookmarks belonged to her.

“She told me, ‘Every time I flipped through this book, I thought, this is such a Kevin book,’” he explained, adding that when she gave it to him, she offered to take out the Post-Its. “I said no, no, no, leave the tabs. I love the tabs! This is like treasure. I’d much rather someone give me this than a diamond.”

Meredith is now scheduled to complete his courses and receive his diploma in December, by which time he will officially be 50, but he said he’s not finished with the books just yet. His next tentative plan is to pursue his Master of Fine Arts degree, which would allow him to teach at the college level, a prospect that he said has its appeal – but with a caveat.

"Of course, if Donatella calls and Versace needs a new head designer,” Meredith made clear, “I'm gonna do that."