Nursing student’s club focuses on giving back to community

It will be a long time, if ever, before the warm memory of a little girl turning cartwheels fades.

Or the surprised look on the young mother’s face when she’s told no money is needed for the coloring books, or the elderly women asking, “How much is this, honey?”

The answer to the latter question is nothing. Zero dollars. Josie O’Dell and the organization she helped found at Radford University wouldn’t take a dime for their gifts and services.

“The looks on their faces are worth it,” said O’Dell, a senior nursing major from Dublin, Virginia.

O’Dell is big on ideas and has a heart to match. She goes at everything with 100% tenacity to get the job done. But sometimes, she admits, she needs a little help, a little push.

During the 2021 spring semester, O’Dell and her advisor, Assistant Professor of Nursing Carey Cole, D.N.P., FNP-BC, were talking about the many outreach programs, such as the Remote Area Medical clinics in the region, that students in the School of Nursing had facilitated before COVID-19.

O’Dell asked Cole how those programs could be rejuvenated.

Start a club, Cole suggested, meaning specifically that O’Dell should get it up and running.

“Phfft,” O’Dell said, playfully scoffing at the idea, saying, “I can’t do that.”

But the more the two talked, the more Cole convinced O’Dell to believe in herself and believe she could start a club from scratch, organize and run it. 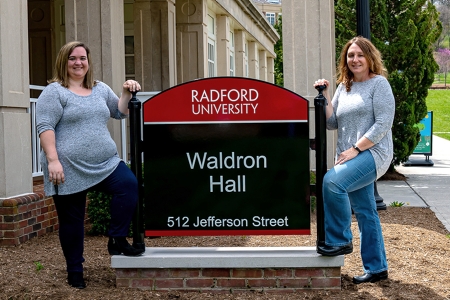 “She (Cole) helped me realize that I had something inside of me that I didn’t know I had,” O’Dell said. “It has made me a better person and really pushed me out of my comfort zone to be a leader and to be someone my peers recognize that they can count on.

“I don’t think I could have gotten here without her encouragement.”

Soon after that meeting in Cole’s office, planning began for what soon would become the Global and Local Outreach and Education Club, or GLOE for short. It quickly took shape in the fall, and its members began carrying out acts of kindness in the Radford and Roanoke communities.

Around the holidays, they collected nearly 2,000 Christmas cards, toys and hygiene products to deliver and hand out at the Roanoke Rescue Mission. “Those kids don’t get much for Christmas, so I’m happy we could help,” O’Dell said. That was where they noticed the little girl turning cartwheels after receiving gifts.

Members also visited with residents at local nursing homes, delivering cards, donating items and singing carols. “We love to get the hugs at the nursing homes and see the smiles on the kids’ faces when we take them toys and things,” O’Dell said. “It’s very sweet and very rewarding.”

In February, club members held a Valentine’s Day drive where they collected more cards and candy to take to nursing homes, and “then we had enough left over to take to a local daycare,” O’Dell said. And in March, they took about 400 items, including Play-Doh and crayons, to the Radford Early Learning Center. “That’s so sweet of you all,” a thankful mother said to O’Dell when she learned the items were free.

That’s not all. Near the end of the spring semester, the club plans to hold a dance-a-thon on campus to collect funds for the Children’s Miracle Network.

“Josie just took the organization to a larger level doing all kinds of projects in the community,” Cole said. “The club has really taken off, and that is primarily through the work of Josie rallying her peers.”

As with many Radford nursing students, finding time to start and run a new club can be an arduous task. But O’Dell is doing it, effectively squeezing her club obligations between her Level 3 nursing classes and three clinicals per week, plus the numerous other clubs and organizations she is part of. She serves as director at large on the Virginia Nursing Students’ Association (VNSA) board and is a member of Radford University’s Student Nursing Organization (SNO) and Sigma Theta Tau, the nursing honor society. Plus, she created a study group for her peers.

“I don’t have time to sleep,” she joked, flipping her long brown hair across her shoulders and adjusting her navy blue Radford University Nursing scrubs in the middle of another long, busy day.

O’Dell balances all this while working as a CNA and devoting time to her husband, Bobby, and 4-year-old daughter, Emma.

Speaking of Emma, her arrival sparked O’Dell’s interest in providing healthcare services for others. “I had the best labor and delivery nurses. They were just so amazing, and I was like, ‘Yep, this is where I’m supposed to be. I’m supposed to be a nurse,” she recalled. “I thought I just needed to get my tail into gear and make this happen.”

She did make it happen.

First, by enrolling at New River Community College and earning an associate degree. And then, she transferred to Radford, which was an obvious and easy decision. One, because it was close to home, and two, because, as O’Dell said, “You Google the top nursing schools in Virginia, and Radford is No. 1.”

In November 2021, the Radford University Bachelor of Science in Nursing programs were ranked as the best BSN programs in Virginia by nursingprocess.org, and Radford’s nursing program recently was ranked by U.S News and World Report for having one the best undergraduate programs in the country.

“Radford is the best place for me,” O’Dell said with cartwheel-turning levels of excitement in her voice. “You have amazing professors like Dr. Cole, and they all have an intense desire to help every one of us succeed. They will do everything within their power to make that possible. They have always been so helpful to me and understanding, and it makes it so much easier to know that I am not alone here in my educational process.

“Coming to Radford University and starting GLOE are the best decisions I ever made.”