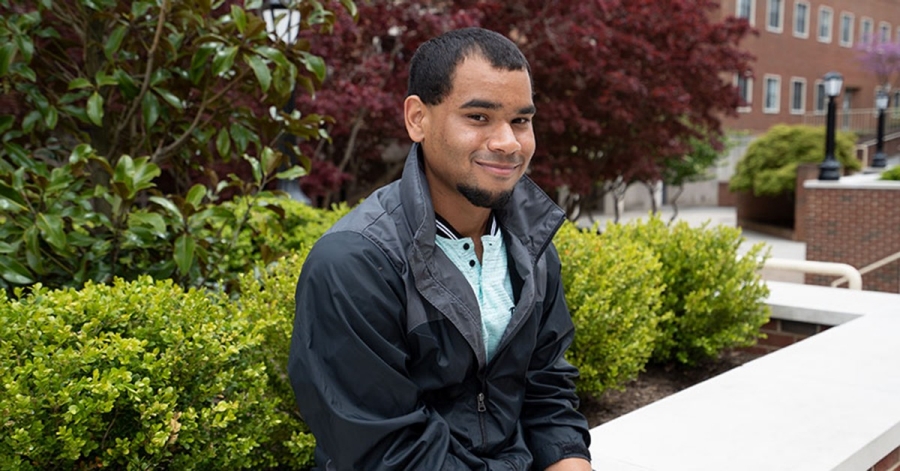 Jamal Hill just wrapped up his first year as a Highlander at Radford University, and it’s been an eventful one for the student from Amelia, Virginia. Like many first-time college students, he arrived on campus with a plan, but he would soon have to adjust that plan to suit his talents.

At the beginning of the academic year, Hill was a biology major. He knew he wanted to help people in the career he eventually pursued, but he wasn’t sure what that career might be. He soon found he was struggling and decided he needed a change.

“In the middle of my freshman year, I changed my major to undecided,” said Hill. “I knew I still wanted to support people in whatever they were going through, but I needed to find out how I could best do that.”

To help him rebound academically after a tough first semester, Hill was referred to Radford University’s Academic Success Center (ASC). The ASC strives to empower students to thrive by providing a variety of quality academic support services. The objective of the ASC is to maximize the student’s personal and academic goals and to encourage them to persist, achieve and succeed.

Through the ASC, students find opportunities to work with academic advisors; engage and connect with peers; meet with faculty and graduate student mentors and coaches; and gather together for educational and social programming.

“The Academic Success Center has been the biggest factor in helping me stay a successful student,” Hill said. “It is hard to put in words how amazing everyone is at the center. They just make me feel at home because everyone is always smiling, and they always speak whenever they walk by, but the biggest reason why is that everyone knows my name and is always making sure I am doing okay.”

Hill not only found academic support at the ASC but discovered an alternate path that would allow him to help people during some of the most difficult times of their lives.

“During the second semester of my freshman year, I chose psychology as my new major,” Hill recalled, “because I wanted to help people by talking with them. I found I was really good at it, and it opened a lot of doors for me and my career.”

Now, Hill is earning A’s and B’s with the support of the ASC and has found his rhythm as a Highlander.

The ASC’s executive director, Corey Cassidy, Ph.D., said that Hill is an outstanding example of how the center can help students through a variety of meaningful interactions with faculty, staff, peer advisors, mentors and coaches.

“Jamal has a favorite spot right here in the ASC and works on his coursework every day,” she said. “He’s done so well and is such a great ambassador for the center that I am trying to recruit him to serve as an academic peer navigator next year.”

Hill initially chose Radford University for several reasons: he has family members who attend; it’s not too far from his home; and he enjoys the amazing location in the heart of the New River Valley. As he heads into his sophomore year, though, Hill has found that there’s so much more to love about Radford.