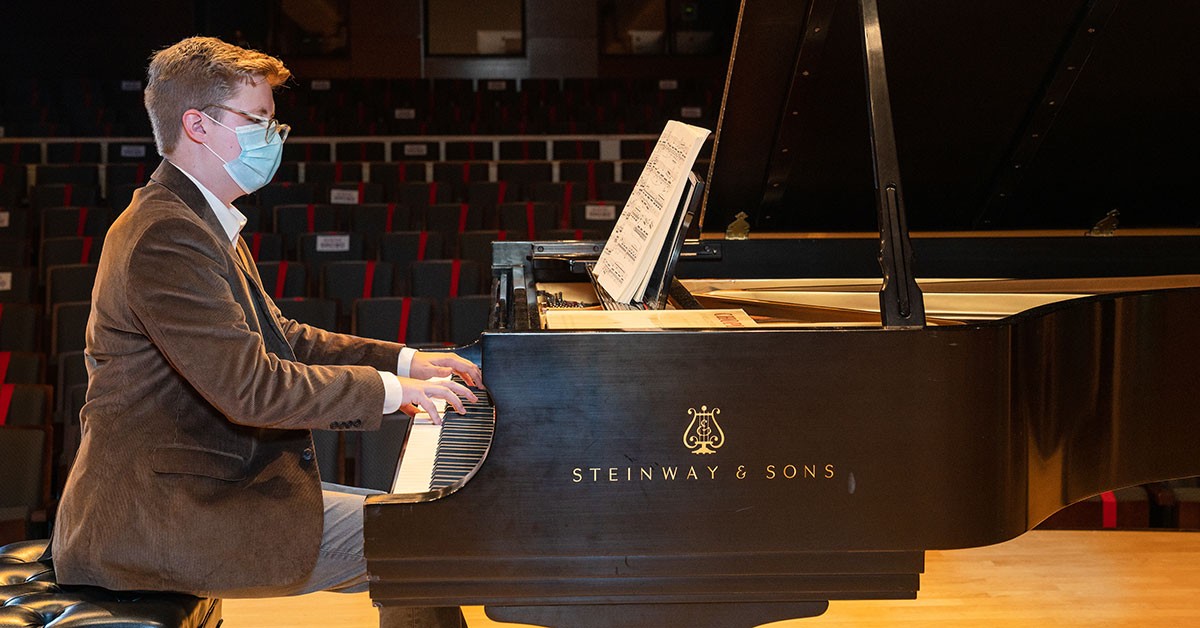 At Radford University, sophomore Hudson Crowe has found the freedom to pursue his passion for music.

Crowe is a talented pianist and percussionist, and he is studying both programs in the University’s renowned Department of Music as a music major.

His musical talent blossomed in high school; however, he has been playing the piano since he was a toddler. After high school, he scouted several different colleges close to his hometown of Salem, Virginia, but it was Radford that truly stood out, he said.

“I absolutely fell in love with the faculty and the atmosphere,” he said. “None of the other programs I looked at had the type of personal faculty-student relationships that you find here. I really valued that.”

Before being accepted into the University’s percussion and piano programs, Crowe said he felt behind in his practice. He was afraid the professors he would eventually audition for might question his ability to excel as a musician.

Instead, they saw potential and offered encouragement.

Associate professor of music Rob Sanderl, Ph.D., immediately took Crowe under his wing. He empathized with Crowe’s feelings of self-doubt and pushed him to succeed. After several lessons with Sanderl, Crowe passed his percussion audition.

He received the same boost of confidence from assistant professor of music Matt Cataldi, Ph.D., who helped Crowe also pass his piano audition.

Their support didn’t stop there. It has been unwavering.

“My professors at Radford prioritize the relationships with their students and their education over everything else,” Crowe said. “They don’t see it as a job or duty or an obligation. They want to help you, and they want to see you improve.”

Now in his fourth semester at Radford, Crowe is continuing to master his craft.

When he’s not in class, he’s in a practice room.

“Musicians are always working on music,” he said. “Because each day that you aren’t practicing, somebody is practicing more than you.”

And, when he’s not studying music, writing music, looking at a score or playing something on the marimba, “then I am walking to or from somewhere, listening to music.

“I try to keep myself listening to music as often as I can,” he said. “Because, one day, I want people to be able to listen to my music and say, ‘Wow, this guy’s good. This guy has it.’”

His other role models are right here at Radford.

Although only halfway through his four years of undergraduate study, Crowe is already focused on his future. He wants to go to graduate school to study either percussion or piano, an ongoing debate, he said.

Beyond that, he foresees himself wearing many different hats, just as his music professors at Radford University do. He aspires to be a music professor, to join an orchestra, to continually write and compose original music and to entertain.

He credits his Radford University education and the many professors who have constantly pushed and encouraged him for his larger-than-life dreams. The experience and the people have also helped shaped him into the man and the musician he is today.

“I’ve grown more here than I would have anywhere else,” he said. “I’ve learned more. I’ve improved more as a person, as a musician and as a student. I am just so thankful for all the opportunities Radford University has given me.”