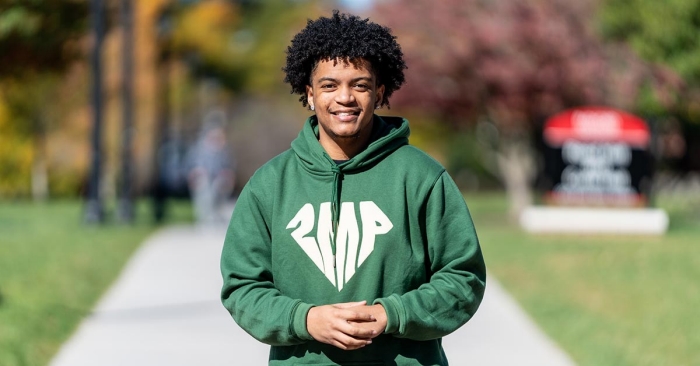 If Devante Mosley still isn’t 100% certain what he wants to do after he graduates from Radford University, that’s not because he lacks for options.

On the contrary, his indecision is largely due to his myriad skills and enthusiasms and the newer interests he has cultivated across his undergraduate career.

A junior from Fredericksburg, Virginia, and the youngest of three siblings, he was born in Japan while his father, a Marine, was stationed there. Early on, Mosley discovered he had the makings of a natural performer.

Already Mosley has had parts in two small independent films, plus an episode of the Baltimore-produced true crime television series “CopyCat Killers” and a music video shot in Atlanta. Locally, he hosts live events, appeared at Stomp Fest and Highlander Hysteria and has performed in student theater and improvisational comedy productions.

When it came time to head to college, he chose Radford University because he felt Southwest Virginia offered him a marked change of pace.

“I’ve been in cities the majority of my life,” Mosley explained. “A lot of my friends went to schools in cities.

“I think this is where I was supposed to go to get my education. Minimizing my distractions. Kind of away from everything. I like the close-knit-ness of it,” said Mosley.

That sharpened focus may have expanded his ambition – last year, he decided to change his major from theatre to media production in order to learn about the editing, writing and shooting processes that actors and performers typically see from the opposite end.

“I found interest behind the camera,” Mosley said. “I still want to act, but I have a bunch of ideas in my head that, sometime down the line, will come out eventually. I want to build up my own production company and shoot large-scale films.”

As his interest in his major expanded, so too did his attention to his minor – sociology – a shift he attributes in part to one of his professors, Stephanie Bradley, Ph.D.

“She really opened my eyes to things I thought I knew a lot about, in terms of why society is the way it is,” he said. “She showed me there’s a lot more that you can know to be able to affect the world, to positively change the world.”

Currently, Mosley is in two of her classes, Social Inequality and Race and Ethnic Relations.

“He is really adept at thinking about how forces such as policies, and roles and norms that we have in our social institutions, impact lives,” Bradley said. “That is one of the hardest things for students to get.

“I truly believe that his presence in the classroom helps advance other students’ understanding and knowledge of course material. The contributions he makes in class resonate with others,” she added.

His studies clearly resonated with Mosley, as well: In November 2021, he opted to change his academic focus once more to make sociology his major and media production his minor.

While doing that will extend his graduation date from next year into 2023, Bradley suspects her student may find a hidden synergy in his seemingly disconnected interests.

“Sometimes folks don’t see how sociology can complement business, but I actually see a very strong relationship,” she explained.

“If he’s making content, he could highlight stories that are socially relevant. If he’s a decision-maker in theater or in casting, he can think about where to find talent that is not just coming from a single vantage point. I think that’s highly important.”

Mosley’s interest in social issues has also been building for a while. Last year, during the months that followed the death of George Floyd and a rise in activism across the country, he was one of the lead organizers of an on-campus rally – the Bigger Picture March – an effort that ultimately drew together hundreds of students, who marched and demonstrated peacefully.

“It needed to happen. And someone had to do it; someone had to coordinate it. And I decided for myself that that was going to be me,” Mosley recalled.

“But it was a challenge to me to see how Radford University and Radford, Virginia, in general, would come together and if we could mobilize like other cities,” he said.

“One of the reasons I came to Radford was because it wasn’t a very, very big school. And I knew I could have an impact and hopefully affect people in a positive way, which I think I’m doing.”

Meanwhile, as he traverses the back half of his undergraduate studies, that looming question mentioned at the start still hasn’t changed: what’s next?

Graduate school is a possibility. He could also take his theatre and media background with him to Charlotte, North Carolina, or Atlanta, Georgia, where movie and television opportunities are available, or push his chips all in and head to New York or Los Angeles, where those same prospects abound.

“There’s a lot of different alleyways that I could go,” Mosley reflected. “I’m just wondering how they meet in the end.”