College of Graduate Studies and Research

Apply now to the College of Graduate Studies and Research.  »

Learn more about the programs and degrees offered through the College of Graduate Studies and Research.  » 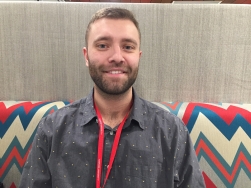 Brent Warner is only one semester away from graduating with his Master of Science degree in education. Before his expected graduation date in May 2018, he will take a comprehensive exam and give his oral defense. His department, and specifically graduate program coordinator Dr. Wendy Eckenrod-Green, nominated him as Radford University’s February 2018 Graduate Student of the Month.

Warner is a Blacksburg, Virginia native and as an undergraduate attended Virginia Tech for science education, concentrating on natural resource conservation. As a local, Radford University has always been on his radar and he liked that Radford University was known for being a “second chance school,” in that it gave students an opportunity to do better in college than they did in high school. Warner also noted that it has a nationwide reputation for being a good school for education. Currently, he utilizes his knowledge from undergraduate and graduate classes to teach high school students about earth science. Warner is passionate about both science and building relationships with his students, something he can do through conversations with them inside and outside the classroom.

Warner has a packed schedule this semester including graduate classes during the week, work on the weekends, teaching earth science, and raising a child. He said his greatest accomplishment is juggling all his responsibilities. As for how he perseveres through graduate school, Warner said, “I have a two-year old daughter. I don’t think I would be back in school if I didn’t have a kid.”

In his free time, Warner enjoys rock climbing and being outdoors in general. He is a member of Crimper’s Climbing Gym in Christiansburg, Virginia, and said that “having something to take your mind off school” is important for reducing stress. If he were not pursuing graduate school for education, Warner thinks he “would be doing something in outdoor education” because he did that before coming to Radford University and is very passionate about it.

“I really like taking classes and being forced to learn things. I enjoy the learning process and education, which is one of the reasons I am a teacher. I am going to miss being in the classroom as a student,” Warner said. He described his most meaningful academic relationship with Dr. Matthew Grimes, because “not only was he a good professor, he helped me navigate the school.” Warner also had some good advice for new students starting his program: “Be passionate about what you are learning. If you are not passionate about education, you will be less motivated to attend class, write papers, and do the readings,” he said.

After graduation in May, Warner will be applying for positions in Montgomery County. His girlfriend already has a job in the area, one she achieved just three days after her graduation in December, and he is hoping to work close to her.