Davis College of Business and Economics

The Economics Student Association, or ESA, unites economics majors as well as others interested in the field. We encourage student and faculty interaction, hold seminars, debates, and other activities, while establishing an environment that promotes the development of leadership and innovation. We want to give members a better understanding, awareness and appreciation of the global economy and international business environment.

Omicron Delta Epsilon, or ODE, is a national Economics honor society that seeks to create reward and encourage the study of economics. Individuals who have taken at least 12 credit hours of Economics courses at Radford University and maintained at least a 3.0 average in those classes are eligible for membership 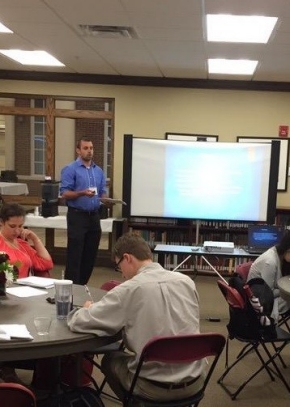 Tyler Francis, a rising senior majoring in Economics (B.S.), presented his research on international trade between Cuba and Canada at a conference held at Troy University in Alabama the weekend of April 16-18, 2015. His talk, entitled “Trade Between Cuba and Canada: Past, Present, and Future”, was accepted for presentation at the Undergraduate Research Conference on Liberty and the American Tradition hosted by the Manuel H. Johnson Center for Political Economy. Mr. Francis was able to showcase his work before fellow undergraduate researchers and notable guest speakers, including Dr. Burt Folsom (Hillsdale College) and Dr. Lawrence Reed (Foundation for Economic Education).

The Economics is Everywhere (EiE) program launched in the Spring 2015 semester. This newly labeled program is a continuation and expansion of a previous guest lecture series held in conjunction with the Department of Economics and the Economics Student Association (ESA).

On October 29, 2015, the Department of Economics hosted Dr. Anthony Carilli. Dr. Carilli presented his talk entitled “Man, Economy, and South Park”. In line with the theme for Economics is Everywhere, his presentation introduced students to the lessons on the economic way of thinking contained within various episodes of Comedy Central’s South Park series. Placing economic decision making into the context of South Park, Dr. Carilli illustrated the role of market prices and institutional “rules of the game” in coordinating the activities of numerous people across time and space. This often-spontaneous coordination is the result of human action but not of human design, as individual action leads to the formation of complex social phenomenon.

The EiE program will be continuing Spring semester 2016. Interested students should contact the Department of Economics if they would like to get information on upcoming events.