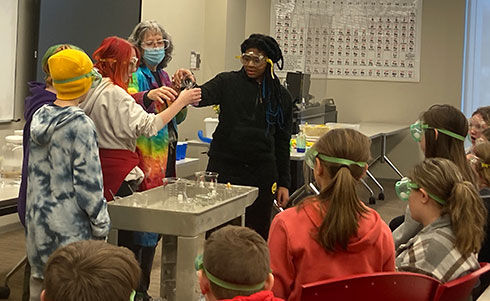 Inspire the next generation of scientists.

That has been the goal of Rhett Herman, Ph.D., for the past 20 years of organizing and hosting free Science Days at Radford University.

“Or inspire those who simply appreciate and understand science, and what it can do for them and for everyone,” the professor of physics explained.

The most recent group of the young and curious was a group of about 230 sixth graders, along with 30 teachers and chaperones, from Chestnut Grove Middle School in King, North Carolina. The group traveled nearly 100 miles on white school buses to visit Radford University’s Center for the Sciences on Jan. 11, 2023, to explore and learn from Radford faculty and students about astronomy, botany, chemistry, physics and even some science involving zombies.

“We are trying to get them interested in science,” said Professor of Chemistry Kim Lane, Ph.D., as she prepared for a series of chemistry magic shows that involved, among many spectacles, liquid nitrogen and setting a dollar bill on fire without it burning. “We want to capture their interest – make sure it’s not just about the oohs and ahhs – but make sure they are learning something.”

“We always say the difference between this and a regular magic show is we explain how we do things,” she continued, “and not leave it a mystery.”

Throughout the day, from 11 a.m. to a little past 3 p.m., the students, in groups of about 25, cycled through stages that included a campus tour and fun and informative lessons. They visited the Radford University Planetarium, the greenhouse and various classrooms and tables, including a button-making station run by McConnell Library staff, set up in the Center of the Sciences first-floor lobby.

Physics majors Jonathon Hafferty of Roanoke, Virginia, and Sam Williams of Virginia Beach, Virginia, ran a scientific zombie detector on students who were willing to be outed among the undead. The duo created a device to measure body temperature, “and we’re going under the assumption that zombies don’t produce heat,” Hafferty deadpanned.

About an hour into the science day, Chestnut Grove student Nevaeh Davis was smiling and enjoying the experience – “I really like this,” she said, leaving the zombie-detection table, on her way to the chemistry show while neither confirming nor denying she had tested positive for being a zombie.

Blake Burge stood in awe of all the Science Day and Radford University had to offer. “It’s a big college, and I’ve never toured a college before,” he said. “It’s a lot of fun. It has all kinds of cool stuff like sports and science.” Burge is into science, especially dissecting worms, despite their gooeyness, he said, as he eagerly waited for his group’s turn to enter the planetarium. 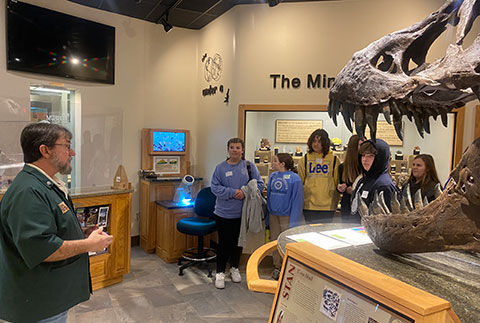 Harmon McGee was in line there, too, and talked enthusiastically about his earlier visit to the campus greenhouse, where he “learned some new types of plants that I didn’t know about,” he said. “I also like the big dinosaur head in there,” pointing to Stan, a replica T-rex skull prominently displayed inside the Museum of the Earth Sciences.

When asked about what he plans to do when he grows up, McGee replied, “Uh, I haven’t really thought about it a lot.”

Many studies, Herman said later, show that inspiring young students is crucial “and needs to happen early in students’ academic careers since that is when they start to see themselves as adults. I organize these Science Days to help spread our own excitement for what we do and to help these kids potentially see their future selves as scientists. And perhaps to see themselves specifically as scientists here at Radford University.”

Many Radford science majors, Herman said, were first exposed to Radford University during campus field trips such as Science Days when they were in elementary school.

“They said during those visits that they could picture themselves here,” Herman noted, “and that came to pass. These visits have a lasting impact on both the students and on the university.”

About 48 hours after their visit, the students still were buzzing with excitement.

“I have heard for the past two days ‘how cool the planetarium is’ and ‘when will we learn about the moon?’” said Chestnut Grove teacher Kristen Jones. “Students who are not engaged in class with me were fascinated by the chemistry demonstration using dry ice. I had students tell me how they didn't realize that the Earth was so far from the sun.

“The greatest part about the whole trip, as a teacher,” Jones continued, “was the student who was uninterested in school said on the ride home, ‘That school was awesome! I want to go to that college when I graduate.’”