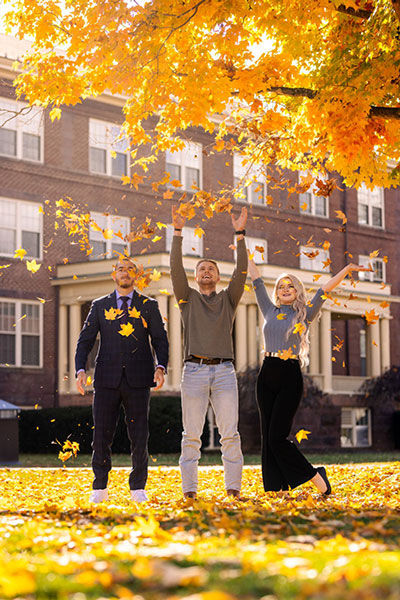 Two Radford University student veterans will appear on an upcoming segment of “Military Makeover with Montel.” The episode airs on the Lifetime TV at 7:30 a.m. EST on Friday, Jan. 13, and Thursday, Jan. 19.

The university is celebrating this honor by hosting a viewing party on main campus during this time. Doors open at 7 a.m. in the Bonnie Auditorium and all Highlanders are welcome.

Sarah Schafer, a senior criminal justice major, and Chandler Scott, a senior business administration and business management major, speak on the show about serving in the military and how Radford helped them discover what was next in their lives. “I realized there were a lot of opportunities for veterans at Radford,” Scott said.

The student veterans are highlighted in “Operation Career,” a segment that highlights businesses and organizations, such as Radford University, that help former military members and their families as they transition into civilian life after service.

Cullen Chavis ’19 also joined the team for the day off camera to offer current students insight into his career and the benefits of the Military Resource Center. Chavis served eight years in the U.S. Marine Corps before graduating from Radford. During the day of the video shoot, he explained that he has benefited “from the programs that they offer, from credits transferring to the work-study programs and some of the personal relationships.”

Also appearing on the show is Radford University President Bret Danilowicz. He speaks about the importance of serving those who have served us. Danilowicz spotlights the university’s Military Resource Center, which provides assistance and space on campus for military veterans, active-duty service members, reservists and their dependents.

“Military Makeover” is hosted by someone quite familiar with the military and what life holds after service. Former talk show host Montel Williams joined the show in 2018. He is well known for “The Montel Williams Show,” which produced more than 3,300 episodes.

However, Williams began his professional career in the United States Marine Corps. He was the first African-American Marine selected to attend the Naval Academy Preparatory School to graduate from the U.S. Naval Academy and become a commissioned naval officer. “Military Makeover” holds a special place in his heart as he can relate to the changes veterans and retiring active-duty service members experience.

Much like Williams, Schafer and Scott entered service early in life and share the compelling circumstances that inspired them to serve their country. Schafer served six years in the United States Air Force, and Scott served in the U.S. Marine Corps from 2016-2020.

Both talk about what brought them to Radford University to build upon the education and skills they gained during that time and what really matters to them now. They also spoke about the importance of the university’s Military Resource Center.

Located in Russell Hall 406, the center offers a dedicated space for student veterans to study and socialize.

“Personally, I feel like it’s definitely vital for them to have that place to go and be able to transition,” Scott said. “A lot of people like myself came straight out of active duty into college, and when you’re in freshman-level classes, and you’re 22, it can be a difficult transition at times.”

Schaffer added that “it’s unbelievably imperative for colleges to understand the specific community and needs of the student veterans. We need a space to transition; we need a space with people who understand what we’ve been through.”