Highlanders in the News: Week of Jan. 2 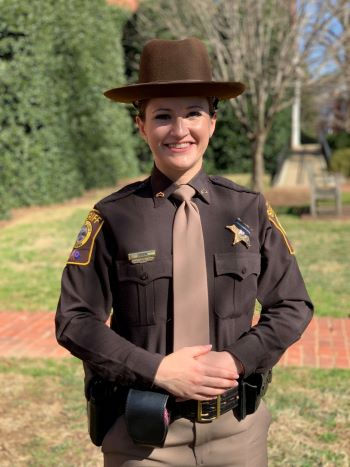 She may be a youthful 30 years old and stand just 2 inches above 5 feet, but Emmie Dean ’13 already holds a daunting, demanding and important job in law enforcement.

Dean is a corporal with the Fauquier County Sheriff’s Office, who for the past three years has worked 12-hour shifts – from dusk to dawn – as she helps to patrol hundreds and hundreds of square miles of Northern Virginia roadways.

On Dec. 28, she became the latest of three female first responders to be profiled by the Fauquier Times.

In the piece, Dean talks about earning her bachelor’s degree in criminal justice from Radford University, then starting as a Fauquier County emergency dispatcher in 2014. She spent a few years as a detention center deputy, then shifted to patrol work in 2019.

Dean discusses the day-to-day aspects of her job, which can range from life and death to everyday problem solving, and she’s candid about the fact that, among the Fauquier’s 132 sworn officers, she’s one of just 18 who are women.

That’s about 13.6% of the force, which, according to a study by the National Institute of Justice, is also roughly the nationwide departmental average.

Dean, whose husband is also in law enforcement, also discusses two of the primary fuels that have helped her get where she is and stay there: Copious amounts of Starbucks coffee and another form of motivation that’s closer to home.

“My family is my biggest support system with this,” Dean declared.

Her profile also appeared in the Prince Williams Times on Dec. 29. 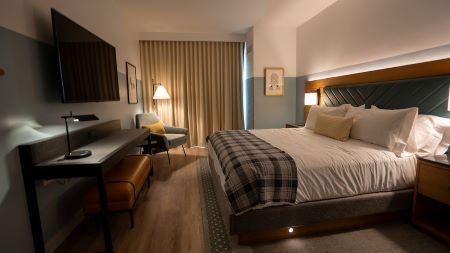 After two years in the works, signs are now blooming that the Highlander Hotel Radford is on the cusp of opening its guest book sooner rather than later.

Back in November, we brought you an update on the project, but that was then. In the two months since, a slew of new reporting has graced the internet regarding the $40 million, 124-room facility, conveniently located at the intersection of Tyler Avenue and Calhoun Street.

The hotel now has an official Facebook page, or you can go directly to the hotel’s expansive new website, whose front page has a dedicated window for making reservations.

It also has a prospective opening date and, despite the timing, that’s no joke – potential guests can now book rooms for April 1 and beyond.

News coverage of the impending opening has also appeared on Cardinal News, in The Roanoke Times and in the trade publication Convention South.

Viewers who want a fleeting glimpse into the accommodations themselves can also sample a Dec. 12 video package by Roanoke’s WDBJ7, which briefly sent a camera into the rooms and other facilities, and also interviewed Highlander general manager Rachel Pegues.

“It’s going to be … a world-class hotel,” Pegues told the station. “We’re super excited to be able to bring some more jobs to the community, as well as having some students working.”