A Radford University professor emeritus ventured more than 7,200 miles from campus over the summer to speak about climate change, delivering his speech in a part of the world he says is particularly susceptible to environmental shifts.

On June 27, 2022, professor of economics Prahlad Kasturi, Ph.D., visited the Kargil campus of the University of Ladakh in India.

Nearly 100 people, including students and numerous faculty members, were in attendance as Kasturi presented his address, “Carbon Neutrality: U.S. and India Policy Options and Implications of Climate Change for the Ladakh Region.” 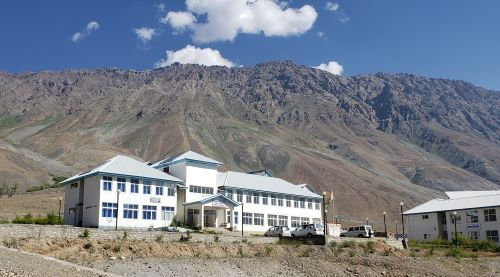 The Kargil Campus of the University of Ladakh

The University of Ladakh, which opened in 2019, has headquarters and campuses in both Kargil and Leh, as well as numerous constituent colleges. It is “the only trans-Himalayan institute of higher learning and research,” according to its website.

“Ladakh being a high, cold desert with thin oxygen is vulnerable to global warming, as it causes glacial melt and drought in the region,” Kasturi explained. “People in the Ladakh region can experience more global warming and droughts in the future due to climate change.”

His talk focused largely on commitments undertaken by the United States and India last fall – during the 26th United Nations Climate Change Conference of the Parties (COP26) in Glasgow, Scotland – to achieve carbon neutrality by 2050 and 2070, respectively.

Carbon neutrality means striking a net-zero balance between carbon dioxide emissions and its removal, or taking away as much as is put out, and Kasturi discussed various means to achieve that goal. Those included market-based approaches such as carbon taxation and cap-and-trade; command-and-control strategies like regulations; and other incentives such as tax credits and subsidies.

“Based on empirical literature in the two countries, an assessment can be made regarding the use of these tools to achieve the goals of efficiency, equity, liberty and sustainability,” Kasturi told the group. 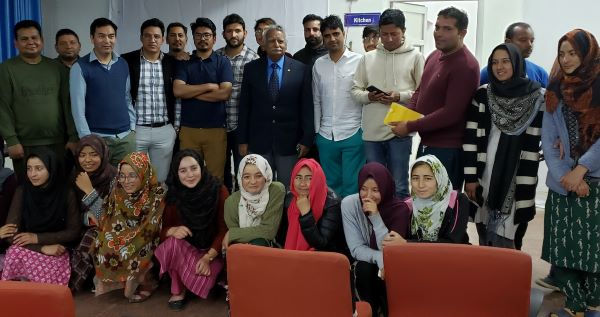 Radford University professor emeritus Prahlad Kasturi, Ph.D. (center, wearing necktie) with students and faculty members of the Kargil Campus at the University of Ladakh in India.

“Carbon taxation is currently missing in both countries and has the potential to be a revenue source of climate finance,” he explained, adding that countries within the Organization for Economic Cooperation and Development (OECD) “have been unable to keep up with their commitment of providing climate finance to developing countries as agreed under terms of the Kyoto Protocol and the Paris Agreement.”

People living in Hunder, in the Nubra Valley, a region of Ladakh, have seen reduced flows of streams and rivers in recent years, Kasturi said, and mountain passes such as Khardung La, once impassable for up to six months out of each year, are now open for longer durations due to reduced snowfall and a recent reduction of area precipitation by about 50%.

“The effect of glacial melts and droughts has reduced irrigation water available for potato, barley turnips, radishes and other crops, and thus affected agricultural output by between 30% and 50%,” he said. “Climate change will remain an intergenerational problem, affecting livelihoods and opportunities as society moves forward into the future.”

Kasturi’s talk lasted three hours. For about half of that time, he fielded audience questions on such topics as governmental priorities, budget allocations for dealing with climate change and innovations for adaptation and mitigation projects.

“The amount of interest shown in the subject surprised me,” he said.

Kasturi’s stop at the University of Ladakh was part of an expansive, multi-faceted trek for the professor, a longtime resident of Floyd County.

“I had not gone out of the country since Covid began, so for the first time after the pandemic, I went to India, Nepal and Turkey over the summer,” he recently said. “I did three separate trips in India, as my extended family is very scattered, and Ladakh was one of them.”

On June 1, just a few weeks before his address occurred, Kasturi and another colleague, University of Delaware Associate Professor for Applied Economics and Statistics Palaniappa Krishnan, published a 32-page paper on the topic called “Achieving Carbon Neutrality: U.S. and India Weigh Policy Options.”

That publication is available online through the University of Delaware’s Biden School of Public Policy and Administration.