Its members get to supervise a small mid-cap value fund portfolio, and staked with capital from the university foundation, they have the ability to decide how and where to invest.

SMIPO was founded in 2002 by professors Steve Beach and Clarence C. Rose with a reserve of $100,000; less than a decade later, the portfolio exceeded $1 million. This year, as the organization celebrates its 20th anniversary, and in the wake of volatile financial activity worldwide, that value sits at just under $1.5 million.

Students have access to a trading room, can enter into competitions with other schools and also travel to at least two out-of-state forums each year.

“I had a passion for investing in high school, and SMIPO is very well known for its success in investing. I thought it would be a good opportunity to learn,” said senior Jonathan Infantolino, an accounting and finance major from Staten Island, New York, who joined the organization in 2019 and who’s been its president since May 2021. After he graduates in December, he said he plans to work as an auditor with Ernst & Young.

“SMIPO has not only taught me about the stock market; it has also opened many doors for me, as I have been able to network through it and meet many important people in the business world,” Infantolino said.

In April, a group of 15 SMIPO students took a four-day trek to New York City, where they participated in multi-day forums at the corporate investment banking firm BNY Mellon, and at Goldman Sachs, the multinational investment bank and financial services company.

“Based on my conversations with the top management of both financial institutions, it was the first time either [company] had hosted any university students for such type events,” said Finance Professor Abhay Kaushik, Ph.D., who has led SMIPO since 2013, and who called the trip “a significant development.”

During its visit to BNY Mellon, the group met with executives to discuss topics that included large-cap equity strategies, philosophies of wealth management and how those can differ from portfolio management, internship options and effective ways to seek employment at the firm.

At Goldman Sachs, students attended meetings in which they talked with corporate officers about options and derivative strategies in risk management, energy commodities such as crude oil, investment banking, and resources that are useful in understanding financial markets, as well as the intricacies of Goldman Sachs' hiring processes.

While at Goldman Sachs, SMIPO members were also met by Radford alum Brian Robinson ’93, head of prime brokerage sales for the Americas. He and three other members of that firm’s investment banking team – two of whom were recent college graduates – had dinner with the students.

Another evening during their trip, the visiting group was also joined by Radford University Foundation CEO John Cox and by a transplanted Highlander and former SMIPO member, Jimmie Newton ’10, who now works at the New York-based hedge fund Indus Capital Partners, LLC.

“We learned a lot about what both firms believe will happen to the stock market in the upcoming years and how to prepare our portfolio,” Infantolino said.

“This was the first time I feel that our students really got a chance to meet with ‘who’s who’ in the investment banking and wealth management industry and were able to gain important information about the internship programs and job opportunities at these large financial institutions,” Kaushik explained.

“It was a wonderful networking event for both the university and the students,” he said.

Kaushik and the current students are also preparing for another trip coming up next month, when Radford’s SMIPO will venture to Chicago, Illinois, for the Student Managed Investment Fund Consortium (SMIFC).

Hosted by Indiana State University and the Scott School of Business, SMIFC is a two-day conference that will include panel discussions and seminars on topics such as fiduciary responsibility, use of derivatives in fund management, current economic conditions and future outlooks.

Guests at SMIFC will include more than a dozen speakers and high-profile moderators, including Brian R. Bruce, chair of the board of directors for The Center for Investment Research; Relationship Manager Tiffany Dolby of Charles Schwab & Co.; and John W. Rogers, Jr., chairman and co-CEO of Ariel Investments.

“We will get a chance to meet with other student organizations, listen to some good speakers, expand the network,” Kaushik explained.

In the meantime, SMIPO is seeking new members. While the organization is only open to undergraduates, Kaushik said it’s not exclusive to business students, so those from other colleges and majors can participate.

He said that with the current economic climate, tainted by factors such as inflation, political volatility and other concerns such as the COVID-19 crisis and the Russian invasion of Ukraine, students holding the wheel of the collective’s portfolio are navigating through particularly turbulent times. That has prompted the group to increase its level of communication through online platforms.

“We have recently become a more dynamic organization, just before the pandemic, and we realized that we have to be in constant touch,” Kaushik noted. “Everybody is connected. They can now reach out to each other quickly.” 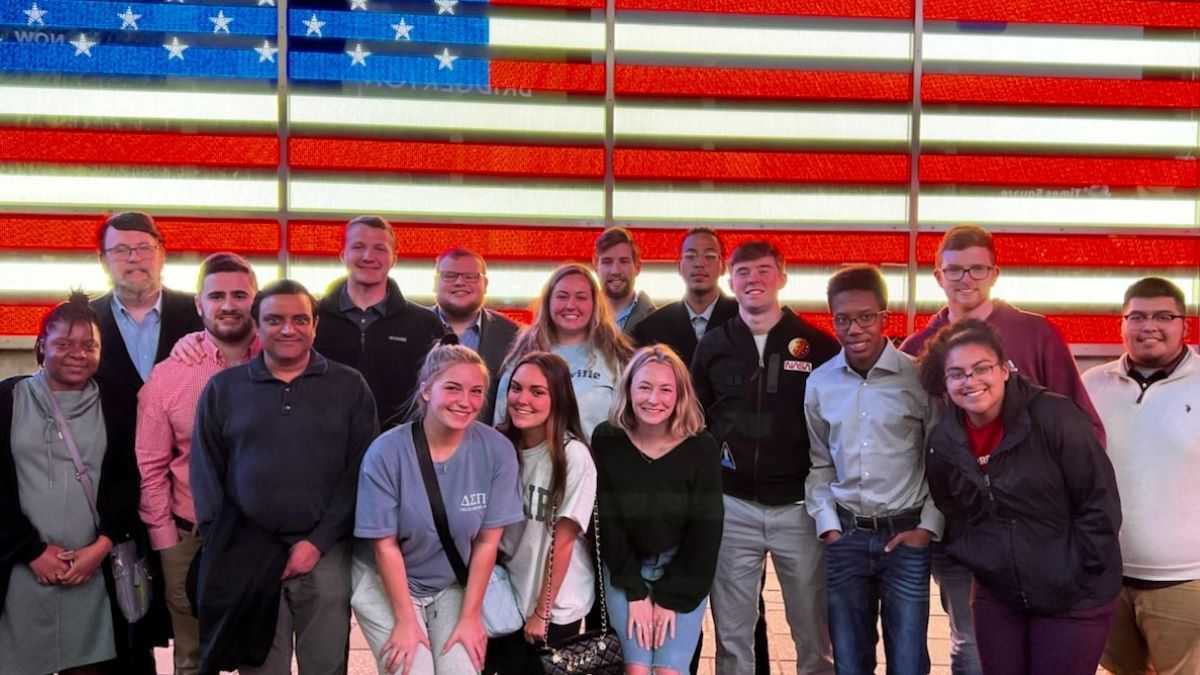 As part of their trip to New York City, students in the Student Managed Investment Portfolio Organization (SMIPO) also had dinner with Brian Robinson ’93 and other Radford alums, and visited Times Square. In October, some of the group's members will travel to Chicago.