Highlanders in the News: Week of Oct. 10 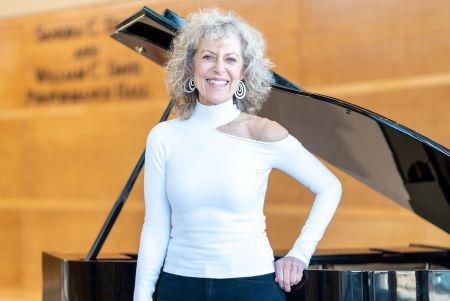 It’s now been 22 years since the pianist and vocalist Judy Carmichael stepped up to the mic from a slightly different angle to create “Jazz Inspired,” a weekly National Public Radio series that presents music and conversation.

Back then, in 2000, Radford University’s WVRU-FM was the first radio station to air the program, a decision made by general manager Ashlee Claud.

So it stands to reason that, to mark that recent landmark, Claud popped up on the latest episode of “Jazz Inspired.” She and Carmichael took the visit one step further into the meta by "trading hats" so that, for the first time in the show’s history, the guest posed all the questions to the host.

“Her idea to interview me seemed the perfect way to honor this anniversary,” Carmichael says at the top of the episode, which became available this month but was actually taped in March, when the regularly touring musician made one of her periodic stops on campus to perform and to speak to students.

“We recorded this program during her visit, but it’s just now coming to air on stations across the country,” Claud recently explained.

Across the episode, the pair discuss Carmichael’s many musical inspirations and spin a wide array of jazz cuts, such as an early recording of Frank Sinatra with the Metronome All-Stars, the smooth sounds of Art Tatum with Ben Webster and the raucous number “Prince of Wails” by Bennie Moten’s Kansas City Orchestra.

Listeners can stream that episode of “Jazz Inspired” and more via the show’s website. They can also download it through Apple podcasts or check the schedule for additional radio air dates. 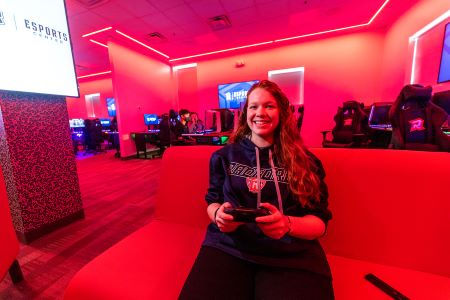 Radford’s Esports Center measures about 1800 square feet, and since its opening over the summer, its profile is growing to match proportionally.

The Esports Center, home to the largest clubs on campus, was the subject of an Oct. 5 story by WDBJ7.

“Having a space designated for that really shows how many other students are really interested,” freshman Viktoria Seitzer said in the news spot.

Assistant Director Doug Benedict, also interviewed, cited congregation as a perk but noted that the center has a range of applications.

“We don’t just use it for gaming,” he told the Roanoke news station. “We can use it for research; we can use it for competitive coding. Ideally, people get the chance to find a new passion that maybe they weren’t going to get to find without access to this.”

WDBJ7’s story also points viewers to the center’s social media outlets – its ID is “radfordesports” on both Twitter and Instagram – and provides a link to its Twitch channel for those who’d rather watch the gaming than play.

The story also appeared on KWCH in Wichita, Kansas, and the center was previously the subject of a July 8 piece by WXFR. 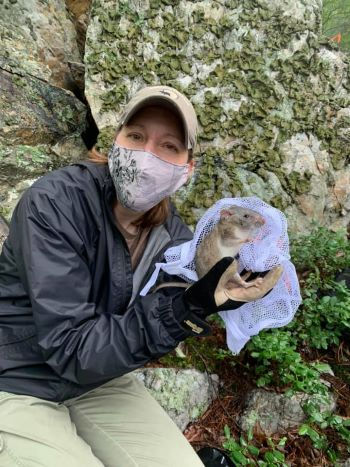 Professor of Biology Karen Powers, Ph.D., with an Allegheny woodrat set to be tagged.

The return of the Allegheny woodrat

A species of packrat not seen locally for two decades has been found to be alive and well and taking up residence in Harper’s Ferry National Historical Park.

The discovery of Allegheny woodrats was made over the summer by a collaborative research effort among Radford University, state wildlife agencies from both Virginia and West Virginia and the National Park Service, according to recent reports.

“Biologists from Radford University found the rodents in the Virginia section of the park, which also spans West Virginia and Maryland,” according to an Oct. 3 report by West Virginia Public Broadcasting. “Both adults and infants of the species were discovered in the area by researchers, who say it’s the northernmost they’ve spotted the woodrats in the state.”

A related story by the Macon (Georgia) Telegraph explained that in West Virginia, the Allegheny woodrat is considered a “species of concern,” but its global status is classified as “vulnerable,” which means it is “at moderate risk of extinction or elimination due to restricted range, relatively few populations, recent and widespread declines or other factors,” according to the National Park Service.

The woodrats – similar to mice and beneficial to nature because they spread seeds and support plant survival and diversity – have been believed absent from the area for about 20 years, an Oct. 3 WSET news report said.

“Given the Allegheny woodrat’s rarity across their historical range, collaborative efforts like this can go a long way in conserving the species,” Radford biology professor Karen Powers, Ph.D., told the Lynchburg news station.

Woodrats recorded during the research effort were tagged, which will enable biologists to gauge trends in their population over time. Data collected will be used in conservation efforts.

The story was also covered by media outlets that included WTOP News and Fox5, both of Washington, D.C., and by West Virginia stations WOWK, out of Huntington, and WTRF of Wheeling.

Powers has published research on the woodrat and various bats and birds, among other topics, and recently was named a Dalton Eminent Scholar Award recipient.