On an early September Saturday, a small group of Radford University students and their professors stood at the East River Mountain overlook near Bluefield, Virginia, “on the very, very edge of the ancestral Appalachian Mountain range,” Associate Professor Jonathan Tso explained. They each peered through the raindrops over into West Virginia, where the colossal mountains that stand there now did not exist 250 million years ago.

“There, we were trying to give students a scale of geology, the time aspect of it and how the landscape of our region has developed,” said Tso, chair of Radford University’s Department of Geology, explaining the purpose of the visit to the outlook. It was one stop on the annual new-student field trip the department organizes at the beginning of each fall semester.

The daylong excursion serves as an orientation for students who are new to the university’s geology major. It is open to freshmen and transfer students, as well as those Radford students who, before the fall semester, switched majors to geology. Plus, it allows students to get to know fellow geology majors and their professors, who led discussions and offered their expertise at each site.

“This trip gives students an opportunity to learn the geology of the region, and it may also be the first time they have been on a real geology field experience,” Tso explained further. 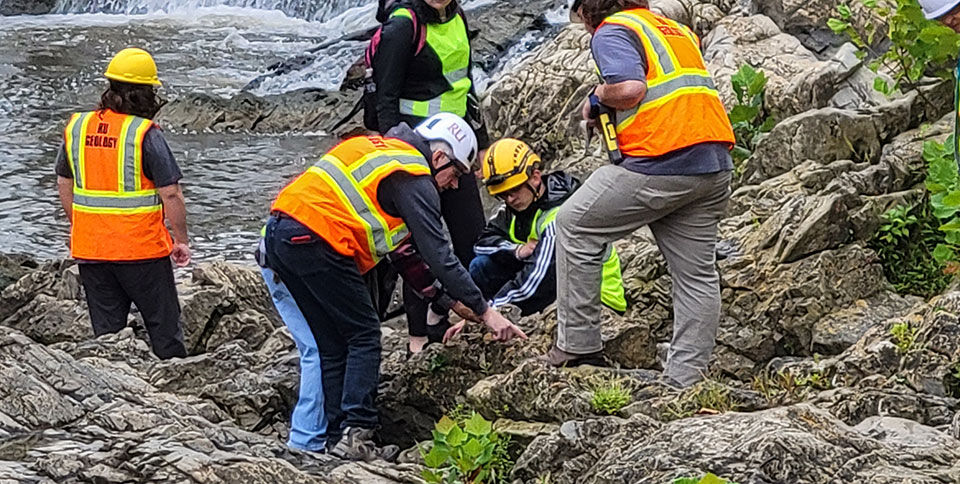 Radford University President Bret Danilowicz (center) and a group of students examine 500-million-year-old (Cambrian) sedimentary rocks of the Conococheague Formation. “There once was a tropical reef here and they are looking for evidence of water currents and layers of sediment trapped by mats of algae that give clues to its ancient environment,” explained John Tso, chair of Radford University’s Department of Geology. Photo provided by Department of Geology Professor Parvinder Sethi, Ph.D.

“The trip was a ton of fun and a great way to introduce the next generation of geology students at Radford to the field,” said Ava Gorski, a freshman geology major from Chesapeake, Virginia. “It was also a good way to get to know the faculty of the department.”

Radford University President Bret Danilowicz, who came to Radford from Florida to take the campus leadership role in July, went along on the excursion to bond with students and to take the opportunity to learn about his new geographic and geological surroundings in Southwest Virginia.

“Him being there was very cool,” Gorski said of the president’s presence. “It shows that he really cares about the students here at Radford, and he likes to get involved.”

The trip began early on Saturday morning on Sept. 10. The group of students, faculty and their president met on campus and traveled by vans to Little River Dam on the outskirts of Radford.

“There is a great exposure there where we have many types of rocks, like limestone carbonate bedrock,” Tso said as an example. “You can see layer after layer after layer, and we talked with the students about what it was like here in Radford when these rocks were first exposed.”

One of the next stops was in Giles County, Virginia, at a site that has been prepared for the Mountain Valley Pipeline. “That was an interesting stop because it involves the practical application of geology,” Tso explained. “We discussed the difficulties of how a pipeline can be laid on this very rugged terrain. Also, we discussed the social and political issues involved with the pipeline.”

And then, there were fossils along the way.

“Once you start looking for fossils, you can’t stop,” Tso said, laughing.

However, after a short while digging through dirt in the Virginia-West Virginia border town of Glen Lyn, Virginia, the group trekked to the Bluefield overlook before making one last stop near Interstate 77 in Wytheville, Virginia. There, they examined exposed rocks “where the geological record is fragmentary,” Tso said, “and there are gaps of time missing.” 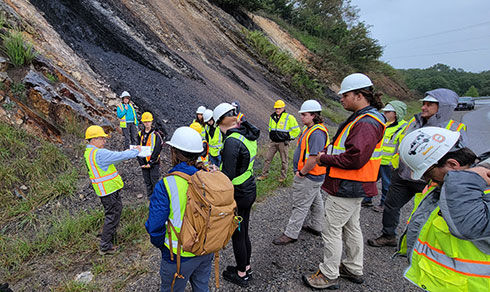 Standing along Rt. 100 on Cloyds Mountain in Pulaski County, Tso (far left) explains that the black rocks behind him are coal deposits from some of the earliest forests found in the geologic record. Photo provided by Department of Geology Professor Parvinder Sethi, Ph.D.

The field trip “is basically a grand tour of some of the rocks we have in our region,” Tso said, and it serves as a primer to what it’s like to be a student in Radford’s Department of Geology, which provides them with a basic framework for a professional career in geology, for graduate studies in the discipline or for licensure to teach earth and space science.

Garrett O’Hara is a senior geology major from Burke, Virginia, and was among the few upperclassmen invited on the trip to help build a sense of community among geology majors. He had been a trip participant as a new student to Radford in 2021 and found it to be a valuable experience in acclimating to the campus and the geology program. This year, as he piloted drones overheard at each site, he was pleased to show students another aspect of the Department of Geology; its popular Unmanned Aerial Vehicle (UAV) Center and drone research program.

“My experience on the field trip was foundational to my Radford experience,” O’Hara said. “When I transferred to Radford last year, the new-student field trip helped me make connections from what we learn in class to real-world applications and examples.”

Getting to know fellow students in a classroom setting can be difficult, O’Hara acknowledged, “but having an engaging activity like sifting through rocks to find fossils really opens up conversations.”

Another conversation that develops along the trip is the one where faculty explain to students about many research opportunities that are available to them.

“We stress to the students that they can work on research projects with their professors,” Tso said. “Because doing so is a major part of the Radford University experience. And this trip is a great way to show students all of the many possibilities that are available to them in our major, and they get to see geology in ways they haven’t seen it before.”