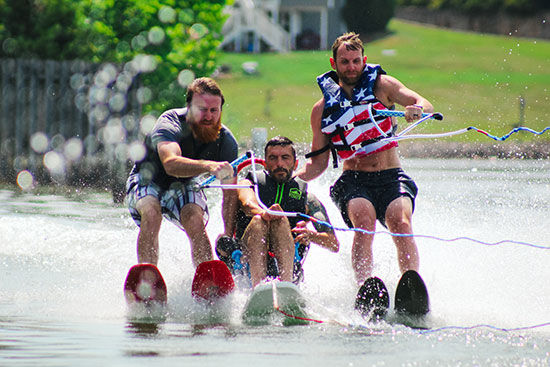 Wake the World Event at Smith Mountain Lake in June 2022.

Over the past few months, students and faculty in the Doctor of Physical Therapy (D.P.T.) program at Radford University Carilion have organized and participated in adaptive activities designed to help broaden access to recreation opportunities in the region. The activities have been transformative for the participants, giving them the chance to experience water sports in new ways by increasing their independence and broadening their worlds.

In late June, D.P.T. students and faculty partnered with Wheel Love, a local community support group for differently abled individuals, and Wake the World Adaptive, a 501(c)(3) nonprofit organization of boat owners providing water sports opportunities to abandoned, abused and neglected children as well as for wounded warriors and individuals with disabilities, to host “Wake the World.” This two-day adaptive waterskiing event was held at Crazy Horse Marina on Smith Mountain Lake in Moneta. 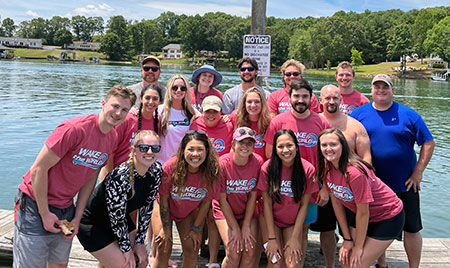 D.P.T. students, faculty and volunteers during the Wake the World event.

Participants with different abilities were provided with the opportunity to water ski using adaptive equipment and were supported by two volunteers. During the ride, they also had the option to ski without assistance.

D.P.T. students assisted participants in and out of the equipment and back to shore once the tow line was released and also skied alongside them.

“This kind of event is incredible to be a part of, especially for first-time participants,” said Julia Wadding, a first-year D.P.T. student who helped with the activity. “It changes the mindset of what you can do after an injury or diagnosis. Having the assistance of volunteers provides a safe environment for someone to try water skiing for the first time or get back to doing something they once loved, even if it may look a little bit different.” 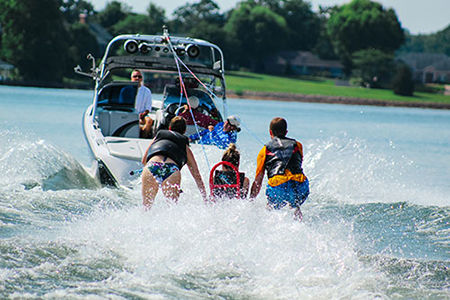 D.P.T. students help a participant water ski during the Wake the World event.

Fellow first-year D.P.T. student Nathan Iskowitz said the Wake the World event was important because it allowed for a kind of all-inclusive water sports experience.

“You wouldn’t traditionally think of wakeboarding as the most inclusive sport,” he said, “but because of the overwhelming support of the foundation and the adaptive equipment, we were able to overcome any challenges and provide a fun and safe experience for everybody involved.”

Both Wadding and Iskowitz said that being part of opportunities like this one will help them be better physical therapists when they graduate, and they both are thankful to the partner organizations for the chance to participate in Wake the World.

“Partnering with foundations like Wheel Love and Wake the World is important because it gives me and my fellow D.P.T. students the opportunity to apply the skills we’re learning in the classroom, gaining a deeper understanding of what it is like for people to live with disabilities,” Wadding said. She added that as future clinicians, it’s valuable to gain insight into how they can help improve an individual’s quality of life outside of traditional patient care. 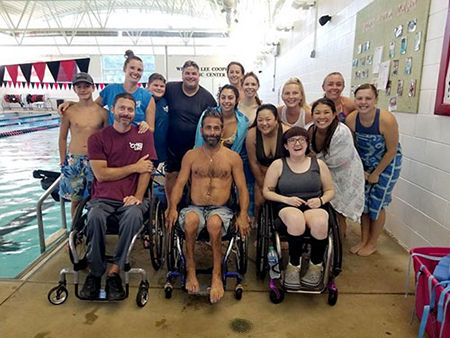 Volunteers and participants at the adaptive kayaking event at the Franklin County YMCA in September.

“We had a participant who was terrified at the idea of waterskiing and was even scared to be in the water,” Iskowitz recalled. “With the help of everyone there, the person wound up taking multiple trips around the lake and having a blast. We were able to leave that day having helped a lot of people experience something they never thought possible. It was an extremely welcoming and communal environment that had a positive influence on everybody involved — not just the participants.”

In early September, the D.P.T. students and faculty followed up with another adaptive event at the YMCA in Franklin County. They once again partnered with Wheel Love to host an opportunity that allowed individuals with spinal cord injuries to try kayaking. For many participants, it was the first time since their injuries that they had attempted to do this type of activity.

D.P.T. student volunteers and faculty member Daniel Miner, D.P.T., assisted the participants into a kayak, which was then slid into the pool with the help of volunteers. Once participants got a feel for the kayak and how much stability they had, the volunteers took their hands off, and participants were able to paddle around the pool. Scot Mills, the founder of Wheel Love, paddled among the participants, giving them advice on kayaking and how they could incorporate it into their lives, helping make them feel part of the community.

“I believe this opportunity gives the participants a sense of safety, and they are more likely to come out to an event and try something new and exciting that they might not have thought about trying after their injury,” said Natalia Hurtado, a first-year D.P.T. student who volunteered at the event. “This adaptive kayaking event is also important to students like me because it gives us an opportunity to practice skills we are learning in classes while also engaging with members of the community.”

Hurtado said that one participant that stood out to her had not tried kayaking since his spinal cord injury. 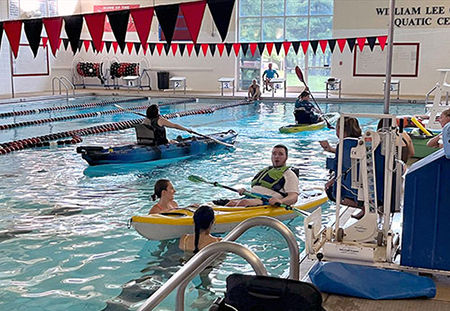 Participants at the adaptive kayaking event.

“Initially, I could tell there was some hesitation from both him and his wife, who was watching from the outside of the pool,” she remembered, “but shortly after he was in the kayak, stable and paddling on his own, he had a moment of realization that he was kayaking all by himself and without any help from the volunteers.”

Hurtado said that after paddling for a while, the participant decided he was ready to try flipping the kayak to ensure he knew how to safely get out in case this happened when he was by himself or with his family in the future. She said he could sense the hesitation again in both the participant and his wife, but he was able to successfully achieve the flip and recovery.

“I turned to see his wife, who had tears of joy in her eyes, proudly standing by and taking videos and pictures of her husband’s success,” Hurtado said. “It was so exciting to see the participant’s face light up when he realized kayaking was something he could do and was a perfectly feasible activity he could start incorporating into his life.”

Wadding, Iskowitz and Hurtado all say they will continue to be part of adaptive activities like these going forward, indicating they are as important to their professional development as they are to improving the lives of participants.

“Being part of these kinds of events can be a great reminder that spending just a few minutes of your time can change a participant’s entire perspective on what they are capable of experiencing and achieving even after their injury,” Hurtado said.

“It reminds me why I chose this career in the first place,” Wadding added. “I want to enhance well-being and show people they are capable of accomplishing things beyond what they think is possible. Plus, who doesn’t love spending a day outside on the lake?”