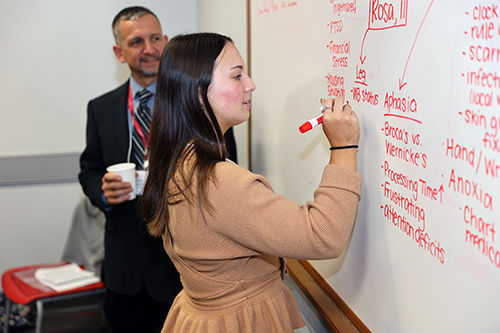 Around conference tables in roughly half a dozen rooms on the lower level of Radford University’s Heth Hall, students and faculty in programs that are part of the Waldron College of Health and Human Services excitedly talked and took notes.

Each group discussed Rosa Garcia — a sixth-grader at Christiansburg Middle School who moved to the area four years ago with her mother, father, two sisters and grandfather. The family lived in a 70-year-old rental house with heating problems and cockroaches, but they were afraid to complain to the landlord. Eight weeks ago, a fire tore through the home as the result of a faulty furnace. Rosa’s parents escaped unharmed with her sisters, but Rosa was trapped under a bookcase. As her grandfather tried to help her, he suffered smoke inhalation and had to be hospitalized.

By the time the firefighters rescued Rosa, she had smoke inhalation burns, her right foot had second- and third-degree burns, her right leg was broken, and her right hand was crushed by the bookcase. Due to lack of oxygen during the fire, Rosa also suffered anoxia, which has resulted in aphasia and cognitive changes. Since the fire, Rosa has had surgeries to put pins in her ankle and several skin grafts on her foot. One became infected, so she still has daily dressing changes to this wound on her foot. She and her family don’t have much money, are now homeless and have lost everything they owned. Despite support from their church and agencies in the community, they are in a difficult situation. 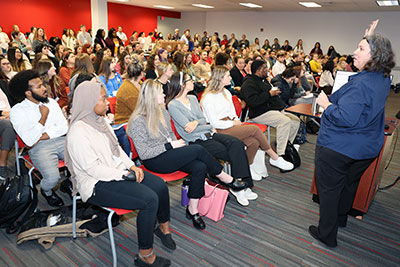 The incident and the Garcia family are entirely fictional — a scenario developed as part of the fall 2022 Waldron College lnterprofessional (IPE) Case Study Activity, held on campus with students from main campus and Radford University Carilion (RUC) programs on Nov. 4. Yet, it is a story that strikes very close to reality and could happen to a number of families in similar circumstances across the region.

“This is our students’ chance to study a very plausible situation and then focus on the roles and responsibilities of their own disciplines as well as those of other professionals they work with,” said Kerry Vandergrift, Ph.D., an associate professor and coordinator in the School of Social Work, interim associate dean of interprofessional education and diversity equity and inclusion of Waldron College and chief organizer of the event. “The whole purpose of studying interprofessional education and having activities like this one is to educate students about how to communicate and collaborate effectively, see if there is overlap in the continuity of care and decide who will do what if there is overlap.” 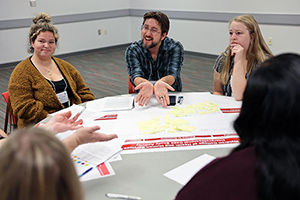 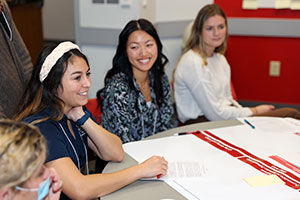 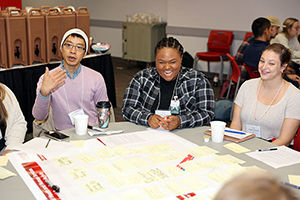 This is the 12th year Waldron College has hosted the fall IPE case study activity, and over 200 students from six different academic programs participated, including communication sciences and disorders, counseling psychology, physical therapy, nursing, occupational therapy and social work. IPE has become an increasingly important part of the curriculum at Radford University and other institutions across the country that educate students in health and human services professions.

According to the World Health Organization, “Interprofessional education occurs when students from two or more professions learn about, from and with each other to enable effective collaboration and improve health outcomes. Once students understand how to work interprofessionally, they are ready to enter the workplace as a member of the collaborative practice team. This is a key step in moving health systems from fragmentation to a position of strength.” 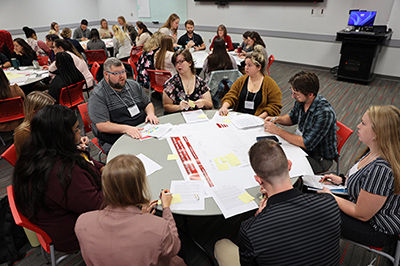 One of the groups, led by faculty member Jason Browning, Ph.D., discusses Rosa and her family’s situation.

Second-year Master of Occupational Therapy student Kari Portington said the activity provides valuable dialogue between the students now that will help them provide better care when they are in the field as professionals.

“Being able to educate others on what we do as occupational therapists and being able to learn about the other professions and their scopes of practice is really helpful to us as we develop into professionals,” Portington said. “The conversations we’re having today will help us consult and collaborate more effectively, which is good for everyone — the patients and the caregivers.”

Vandergrift said at the beginning of events like this IPE activity, the organizers do give a little instruction on what it means to work together, but that the bulk of the experience happens naturally as the students collaborate and brainstorm.

“We have students on all different levels, from undergraduate through graduate to students in the field, doing internships and practicums,” Vandergrift said. “They really help to guide the students who haven’t had that real-world experience yet. We know each group brings different kinds and levels of knowledge, so one of the most important things we try to teach them is to feel comfortable saying, ‘I don’t know.’ That’s okay to say, ‘I don’t know, let me find out to be sure,’ and then being willing to reach out to other professionals for answers.” 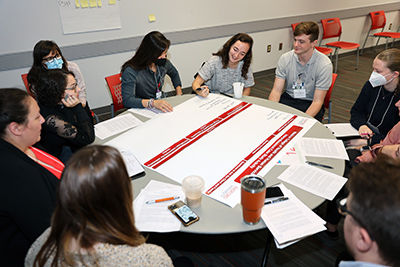 Claire Gilchrist, a graduate occupational therapy student, said that she and her classmates hear about other professions in the classroom, but that learning about what other professionals do firsthand is invaluable.

“Hearing from speech and psychology and other professions we don’t typically hear from in our studies really opened my mind to how we would work as an intercollaborative team in the real world,” Gilchrist said. “I feel like I’m so much better prepared now than I was before this event because I know more about how we all work together to care for our patients.”

Gilchrist specifically mentioned that she enjoyed working with her fellow students in social work because it’s an area she hadn’t fully considered as a necessary part of helping people get back on their feet after a disaster like the one in the case study.

Vandergrift said it’s those kinds of interactions that she and her colleagues hope students will take with them beyond campus and into their careers.

“We’re really excited for this opportunity, and our students have told us that they have had really good experiences with this event in past years,” Vandergrift said. “They tell us about how they have carried this knowledge and experience forward into their professional lives. And that’s our goal. It’s not just about what they do in here today. Our goal is really to make a difference in practice.” 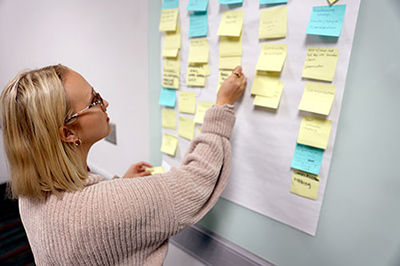 A student adds a sticky note to a board during an activity in which group members wrote down what they thought other professions do.

The fall IPE case study activity is one of several IPE-focused events hosted by Waldron College during the academic year. A second virtual case study event is held in the spring with a different set of students, including physician assistant and public health students, and a symposium is held annually in April to showcase research that has been conducted during the year.

“We try to bring together interprofessional teams in lots of different spaces to give them many opportunities to interact,” Vandergrift said. “And it’s beginning to happen more organically with groups of students going into labs and classrooms with other students, like respiratory therapy students talking with physician assistant students about intubation. It’s exciting to see that kind of crossover happening.”