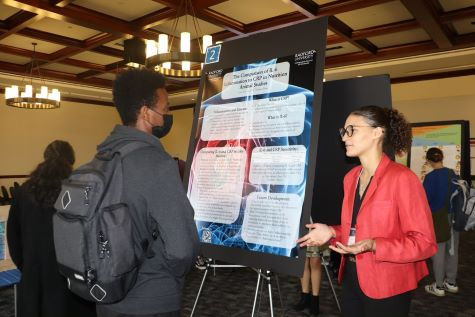 So what did you do last summer?

For participants in the Summer Undergraduate Research Fellowship (SURF), answering that question every October is not belated small talk so much as a central discussion in a special program in which they’re involved.

Months before they reach that query, however, those SURF fellows must design a supplemental study project, usually something related to their major. They then submit a proposal to the Office of Undergraduate Research and Scholarship (OURS) and, if selected, receive a $1,000 stipend and $500 budget to work on it over the summer as fellows under the supervision of a faculty mentor.

SURF fellows then agree to present their findings and results before an audience – generally through an onstage presentation or poster exhibit, both of which involve question-and-answer sessions – so in addition to getting extra time and resources to explore issues important to them, they also find a forum that challenges them to express their interests to others and think on their feet.

The program recently marked its 10th anniversary, meaning a decade’s worth of Radford’s students, or more than 200 of them, have passed through it.

SURF wrapped up its 10th session on Oct. 12, 2022, at Kyle Hall, with a daylong Summer Research Celebration, at which this year’s 24 fellows took turns talking about their work.

The event featured projects across a wide range of subjects: from the effect of qualified opinions on stock prices to the history of the 102nd United States Colored Infantry; from the use of biodiversity data in identifying genetic lineages to the habitat preferences of a newly designated species of salamander. 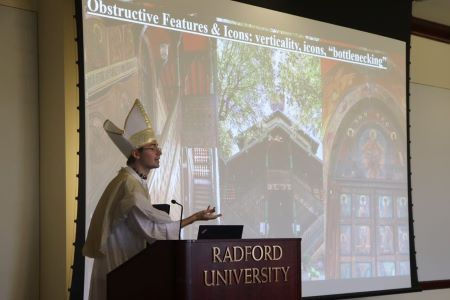 The full program of all 24 projects can be found here.

OURS director Joe Wirgau, Ph.D., said that while SURF’s basics changed only slightly over the past decade, its ingredients have evolved.

“The quality of student grant-writing is greatly improved, the presentations are better able to connect with broad audiences, and the types of projects now really incorporate questions beyond the traditional idea of a researcher in a lab or archives of the library,” he said.

“Over the years, the types of questions students are asking for funding and time to delve into are increasingly societal and personal in nature,” Wirgau added.

That was reflected in two new approaches taken this year, the first by senior Luc White of Richlands, Virginia. White, who uses they/them pronouns, made the closing talk for their project – “Revisiting the Saints: Locating Queer Histories and Medieval Architecture Through Philosophy” – a combination of information and performance, a presentation they conducted wearing a costume that included robes and a ceremonial miter headdress.

White, who double majors in studio art and biology, said being able to incorporate theatrical elements “elevated my research, my artwork and the space” and called it “liberating.”

Another new option this year was a film showcase through which students could create short movies and screen them for an audience. Two SURF fellows chose that path, which their instructor said gave them a firsthand chance to learn about filmmaking on the fly. 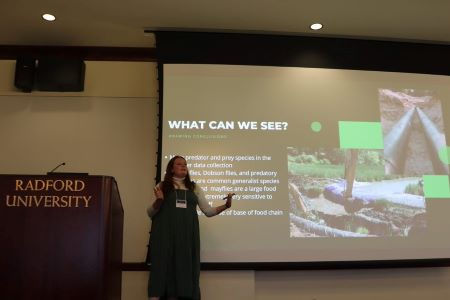 “There were moments for both of them that, I think, they felt overwhelmed, like ‘this isn't turning out the way I wanted it to,’” said West Bowers, Ph.D., associate professor in the School of Communication. “Part of my job as a mentor was to be able to tell them that happens in production all the time. This is really the process you have to go through to figure out what kind of changes you need to make and being able to improvise and adjust.

“I think the benefit is very clear, in that it further prepares them for the kinds of projects they would be taking on in the real world,” Bowers said.

Javen Blankenship, a senior communications major from Richlands, Virginia, said the movie he produced, “Withdrawal,” was only the second short he’d made, but he believes the experience gave him valuable momentum, and he recently finished a third effort.

“Having to present something I made, having to talk about it, it's almost like [gaining] confidence via trial by fire,” Blankenship said. “I think I needed that to weed out whether I wanted to continue to do this or not, but the whole process just solidified that I do love doing it. And I want to get better at it. And the SURF program really kicked me through that.”

Even those students who took the standard methods of finishing their SURF project, however, called it a rewarding experience.

“I chose to do a poster, not an oral talk, because I felt I could more effectively communicate the complexities and significance of my research to such a diverse audience,” said Leah Ellis, a sophomore from Fredericksburg, Virginia, who is majoring in nutrition and dietetics. Her topic: “The Reliability of IL-6 Inflammation Compared to Cardiac CRP in Similar Nutrition Studies.

“This event is open to social progress. By that, I mean SURF is a safe place for non-standard research,” Ellis said. “And the SRC allows students to be seen as individuals, more than just their majors, and to produce work of the highest quality for others to enjoy.”

Applications for next summer’s session will open this month. The deadline to apply is 5 p.m. Friday, Feb. 16, 2023.