Radford ranked among most engaged campuses for student voting 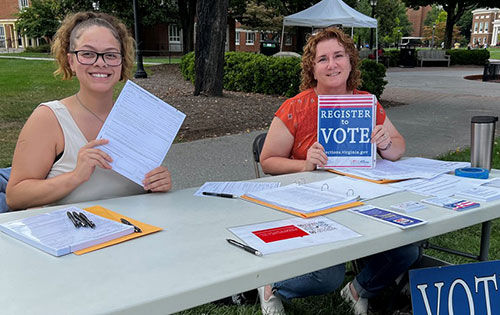 Radford University student I’yonah Cartwright (left) played an important role in rallying students to register to vote. Pictured at right is Janet Hahn from the Radford League of Women Voters.

Radford University is one of the most engaged college campuses for student voting in 2022, according to a new ranking by the ALL IN Campus Democracy Challenge.

The ranking recognizes colleges and universities “for making intentional efforts to increase student voter participation, ALL IN wrote in a news release. Radford University joins a group of 394 higher learning institutions that completed a set of action items to institutionalize nonpartisan civic learning, political engagement and voter participation on their campuses. Those challenges were:

“College student voter turnout has increased since 2016, and this increase has been driven by students. The ALL IN Campus Democracy Challenge is excited to expand our ALL IN Student Voting Honor Roll to recognize these student voting champions across the country,” said Jennifer Domagal-Goldman, executive director of the ALL IN Campus Democracy Challenge. “These students registered voters, served on their campus voting coalitions, spearheaded voter education efforts, advocated for campus polling locations and organized other voter engagement efforts to ensure their peers were confident and informed voters.”

The ALL IN Campus Democracy Challenge (ALL IN) is a national nonpartisan initiative of Civic Nation, which “strives to change civic culture and institutionalize democratic engagement activities and programs on college campuses, making voter participation a defining feature of campus life,” the organization said. The challenge currently engages more than 9 million students from more than 950 institutions in all 50 states and the District of Columbia.

Radford took on the challenge with Department of Political Science Professor and Chair Chapman Rackaway, Ph.D., working with students to lead those efforts, which included “Voter REM,” Rackaway said: “Registration, Education and Mobilization.

“Students often come to college of voting-eligible age but with no idea of how to harness the power of the ballot box,” Rackaway explained. “For me, getting students to understand why they should vote, ensuring they are eligible to do so and then giving them the civic skills to make responsible choices when they vote is an important part of my mission as a faculty member. So many students come to college unregistered that a more systematic approach is warranted, and that’s what we did.”

Rackaway began the process with a citizen leader project in his spring 2022 state and local government class. In addition to the ALL IN Challenge, Rackaway and his students worked with the Campus Vote Project (CVP), “which is important,” he said, “because CVP hires students to serve as point people on campuses to help folks like me do voter REM as Democracy Fellows. We were accepted to CVP and ALL IN based on the strategic plan, and two excellent young people were appointed CVP Democracy Fellows: I’yonah Cartwright and Kally Hughes. I’yonah and Kally helped rally volunteers for voter registration tables.”

College of Humanities and Behavioral Sciences Dean Matthew J. Smith, Ph.D., and Director of Advancement Carter Turner, Ph.D., played a pivotal role in the process by engaging Radford University alumni “and to give generously to let us buy promotional materials for those voter drives,” Rackaway said. “And we built a campus voter team made up of Radford faculty, students, community members and Tracy Howard, the City of Radford elections officer.”

The groups quickly established themselves for all of the August and September campus welcome events and fairs and created a website where students could register online, find their polling place, view sample ballots, and collect more information to prepare them to vote.  “Highlanders Vote (https://www.radford.edu/content/highlanders-vote/home.html) is the result of that work,” Rackaway said. The website will update each election cycle and expand based on student feedback.