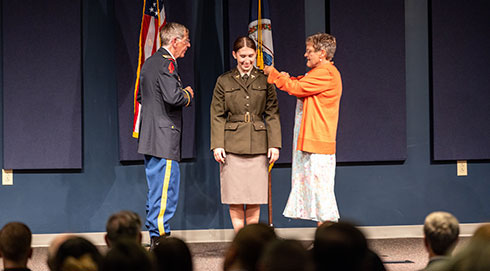 The officers, who also graduated from Radford University during commencement ceremonies over the weekend, have earned the rank of second lieutenant and were granted authority by the U.S. Army to carry out their duties as newly commissioned officers.

“This is an exciting day. Not only are you about to graduate from Radford University, but you are also going to become commissioned officers in the United States Army,” said guest speaker Retired Brig. Gen. James Bienlien ’90. “Today marks a major milestone in your lives and it represents the challenges you've ever met, the dreams and aspirations you have attained and the possibilities realized.”

As part of the commissioning ceremony, cadets took the Army’s oath of office before the traditional pinning of insignia on their uniforms. Next, cadets made their first salute, which, like the pinnings, were carried out by family members, friends and colleagues of each cadet’s choosing. Many of the cadets were from families where parents, grandparents and siblings had also served or are currently serving in the U.S. military.

In his remarks, Bienlien encouraged the cadets to “truly say thank you to all of those who have supported and helped you get to this point.”

In Radford’s Army ROTC, cadets learn teamwork and team-building skills and gain valuable life experiences as they prepare for a military and/or professional career. The university’s Army ROTC program is part of the New River Battalion Virginia Tech. The four-year program consists of a two-year basic course and a two-year advanced course.

The program was established in 1978 under a cross-enrollment agreement between the presidents of RU and Virginia Tech. In 1980, an agreement between RU and Cadet Command allowed the RU ROTC program to offer two-, three-, three-and-a-half- and four-year scholarships.