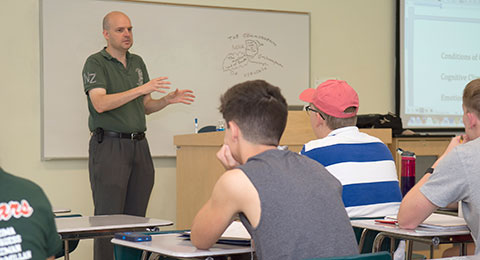 Early one morning, Matthew Turner’s wife, April, walked toward the front door on her way to work and casually asked, “It’s Friday; what do you want to do tonight?”

Turner, feeling stressed from the overwhelming amount of work he still needed to do to complete his Ph.D. studies, answered, “I don’t have time to do anything; I’m too busy.”

Disappointed but understanding, April left their home. After a full day on the job, she returned to find her husband sitting on the couch watching “Monty Python and the Holy Grail.”

“I thought you were too busy to do anything,” she said.

“I’m doing research,” Turner recalled years later with a smile. “And I really was.”

Since he was a kid watching Marx Brothers movies with his father, Matthew Turner has had a love and appreciation for humor. “I was a big fan of Abbott and Costello, too, and I got into Gilbert and Sullivan – I know that was an odd choice as a teenager – but I just loved the witty wordplay,” he said.

Turner, now a professor of communication at Radford University, loved humor so much that he made a career out of studying the art of comedy. In high school, he wrote a paper about the family comedy act – Harpo, Groucho, Chico, Gummo and Zeppo.

“That worked, so I kept doing it,” Turner explained. In college, he wrote a screenplay about Harpo Marx and “would often find ways to sneak comedy into my studies because it was just so interesting to me,” he said, “in terms of how comedy works.”

Along the path to his Ph.D., Turner’s dissertation focused on “Signs of Comedy: A Semiotic Approach to Comedy in the Arts,” which looks at how comedy creates and subverts meaning in a variety of art forms. Since then, he has written book chapters and articles about the Marx Brothers, comedy westerns and “Weird Al” Yankovic. In the meantime, he is writing a book about comedy on the internet.

Plus, Turner has presented his research at numerous national and international conferences in theatre, art history, philosophy, English, popular culture and film.

The Monty Python paper Turner spent hours on the couch researching resulted in him presenting his findings at a conference in England. “So, I took my wife to a conference on King Arthur, and she didn’t complain as much after that,” Turner said, perhaps saving himself from the Gorge of Eternal Peril.

As fun as comedy can be, Turner takes it seriously and admits, “It can be a little difficult to be taken seriously when you study humor.” He answered our questions about his research, his influences, teaching humor to his students and whether breaking down a joke can take away the joy of humor.

How did your research into comedy begin?

“I’ve always liked humor, and I’ve turned it into a career. My Ph.D. is in interdisciplinary arts, which is a broad area, and I wrote my dissertation on a semiotic theory of comedy, which nobody understands anyway,” Turner deadpanned before explaining. “That's essentially how we understand the world as a series of signs, which is anything that we use to communicate. Basically, it's speech, it's pictures, it's movies, it's gestures, it's any of that. In my research, I’ve looked at how comedy is able to undermine those signs in the arts. For example, a pun. It’s two words with opposing meanings that are conjoined together and create an incongruity, which we often find comical. One of my favorite examples is Groucho Marx, who said, ‘I've got a good mind to join a club and beat you over the head with it.’

So, you have those two incongruities of a club – the thing that you can hit something with and an organization of which you can become a member – and they are joined together in that one phrase, and that incongruity creates comedy.”

Tell us about your most recent research.

“My most recent research has primarily been exploring how the internet has changed comedy, how it’s created and how it’s being distributed. It’s a topic I’ve been working on for about 10-12 years. I’ve made some conference presentations, and I’ve just recently been offered a book contract on the topic and really need to get writing.

Essentially, what I’ve found is the internet allows people who haven't traditionally had access to a distribution platform to get one. In the past, you needed to have a big TV studio, a big budget and expensive cameras. You had to have an executive sign off on it. And there were a lot of barriers to entry. Now, you can use your phone, a YouTube account and a little bit of money for some editing software, and you can get something out there for people to see. And you can monetize it. A lot of people can see it, and suddenly you’re successful.

It used to be ideal to get your own TV show – and people still like to do that – but it’s not needed anymore to be known and successful.”

A prime example of the old way and the new way is “Weird Al” Yankovic – one of Turner’s favorites – and his modern contemporaries.

“’Weird Al’ essentially had the market on parodies sewn up for decades. But now anybody can do what he does. His job has gotten a lot harder in the sense that people already pick up on all the easy ideas and put them on YouTube before ‘Weird Al’ gets it out. When he was under contract, he had to release a whole album. So, by the time he came up with an idea, there were already 10 parodies on YouTube. That made his job more difficult.”

This is a big-picture issue. We frequently have to deal with tragedy and difficulties in life, and there is always a question of how we respond. It is essential to being human beings that we can respond with humor and laughter. There are various psychological theories about why we laugh, and one of the arguments I made in my dissertation is that comedy and tragedy are very similar structurally. You will often see parodies of tragedy and comedy.

You can look at the story of Oedipus and know that he doesn’t understand that he has killed his father and married his mother until it’s too late, and that becomes a tragedy. It’s all in the order of the information. Had he found things out earlier, things would have been very different.

Gratification theory basically describes how we use media to deal with our concerns and problems. There is an example in ‘Hannah and Her Sisters’ where Woody Allen’s character is suicidal until he goes to see a Marx Brothers movie, and it changes his outlook on life. Comedy can have a positive effect on us, and we can use it to change our perspective on life.”

Where does satire fit in?

“Satire is frequently used as a means of pointing out vices, follies, problems and things like that. It's often used as a corrective, so you will make fun of things that you don't like or are silly. Typically, what people do is reduce a somewhat complex idea. You’ll often see a late-night comedian make a joke at somebody’s expense by simplifying the complex element.

And, it makes sense within the context of that joke. Quite frankly, it can be used as a form of propaganda because it's very effective. It engages us emotionally. It has a pseudo logic to it, or it points out things that are absolutely absurd.

Other times, it simplifies things that make sense in the context but removes the context. It can do all those kinds of things.”

How can humor be dangerous?

“Comedy can be very dangerous because it's inherently transgressive. It takes the existing rules and regulations and turns them upside down or breaks down or infringes on them in some way.

So, there are dangers in comedy. One of those is that any attempt at humor can be misunderstood – and humor tends to be very culturally specific, and so it often doesn’t translate well, particularly linguistic humor.

But, other humor is much more universal, such as physical humor, and it tends to translate more easily across cultures. Charlie Chaplin, for instance, was a worldwide phenomenon largely because of his physical style of humor.

Jokes about bodily functions are funny because they can break the rules of conventions, and it’s a human thing.

Also, our encyclopedic knowledge is also important. I can make a variety of jokes that work on one level or multiple levels. And the more levels you know, the funnier it can be. Because comedy, for me at least, is often like a puzzle. We solve it, and solving it is ‘getting the joke.’ So, if I don't know what the reference in the joke is, I don't get it.”

When you study comedy to see how it works, do you run the risk of making yourself immune to humor and finding jokes less funny?

“Absolutely! And I tell my students, ‘I’m going to ruin things for you.’ So, I do run a little bit of a risk there for myself, but a lot of my enjoyment is understanding comedy and how it works. But, yes, if I’ve studied a joke and taken it apart multiple times, I might not find it as funny, but I can appreciate the craft. And while I may not find it funny, I can appreciate how cleverly a joke is constructed.