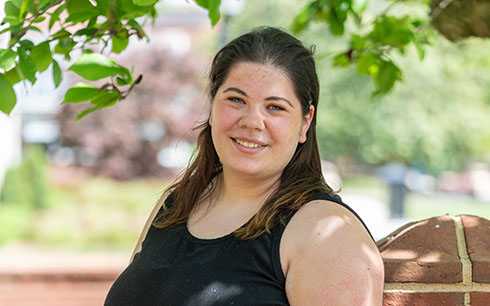 Barry Gorodnick taught at Robinson Secondary School in Northern Virginia for 22 years. He coached football and softball and was a favorite among students.

“He was really invested in his students and in the school’s well-being,” said Barry’s daughter Kaitlyn Gorodnick, a Radford University senior from Centreville, Virginia, “and that really influenced my perception of teaching.”

Gorodnick enrolled in Radford three years ago to study English education. Her heart was set on becoming a teacher and following in her father’s, and her mother’s, footsteps. She had planned to teach middle or high school, but those plans shifted slightly. Along her Radford journey, she took challenging courses, became heavily involved in campus organizations and activities and met faculty who inspired her to think differently about a career as an educator.

One of those was English Professor Rick Van Noy Ph.D., who was Gorodnick’s instructor in a creative nonfiction writing course.

Gorodnick’s newfound confidence led her to begin writing a memoir, which she has turned into an Honors College capstone project, working with Assistant Professor of English Katie Garahan, Ph.D.

So far, the memoir is six chapters, but there is still more to write, Gorodnick said. In 50-plus pages, it explores, in part, her relationship with her father and coping with his death from cancer when she was 12 years old.

The purpose for writing the memoir was “not to be the sob story of my life,” she explained with a smile, but to explore her thoughts and memories and the heartbreak of losing her father. Her writings also delve into the challenges of college, particularly in a time of isolation during the beginnings of the COVID-19 pandemic.

“I had a hard time making friends my first year at Radford, and I had a hard time with the social aspect of college,” she said. “But eventually, getting involved on campus forced me to leave my room and talk to people, and that helped me overcome my fears and let me speak up more in classes and in organizations.”

Once Gorodnick stepped out of her comfort zone, she thrived, championing sustainability efforts on campus, being a member of the Honors College and joining numerous organizations – she represents the English Department as a College of Humanities and Behavioral Sciences ambassador and is the historian for the Alpha Phi Omega National service fraternity.

Her time and work with Van Noy and Garahan, as well as other English faculty members – Assistant Professor Sean Keck, Ph.D., and Emily Keck – have opened numerous avenues for Gorodnick and given her a fresh perspective on her career goals.

“My goal is to teach, and I want to be a professor,” Gorodnick said. “Once I got into upper-level English courses, I knew I wanted to teach in higher education because all of my professors have greatly impacted my life and my path forward.”

Gorodnick graduated from Radford University on May 7, but she is not going away just yet. She plans to come back to the university in the fall to begin work on a master’s degree in English and begin making strides toward teaching others and making the same impact her father and her professors at Radford have made on her life and the lives of others.