Class of 2022: Geology enthusiast takes on a lofty ambition 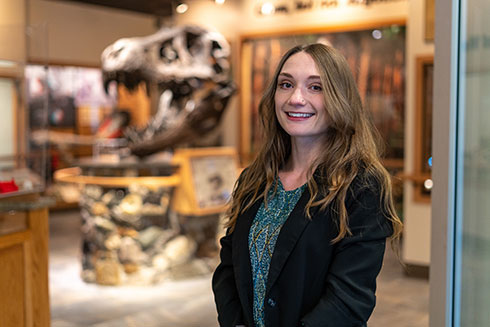 Jasmine Rollins is definitely someone you’d want tagging along on a walk.

“I go on hikes all the time, and I tell people who are with me what they are seeing all around us, the topography, fossils and all the different rocks,” said Rollins, a Radford University senior geology major. “I get joy out of doing that because I love geology.”

Rollins first discovered her love for the science when she was a student at Northern Virginia Community College, and that realization later led her to further pursue her academic interest by transferring to Radford University.

Since she arrived on campus, the Round Hill, Virginia, native has been heavily involved with the Department of Geology. She has conducted undergraduate research with drones that led her to the mountains of West Virginia for a slope stability analysis with Professor of Geology Skip Watts, Ph.D. One day, she helped a congressman visiting campus learn the basics of piloting a drone.

Her work studying the Earth from the sky may have been a bit of foreshadowing that Rollins was unaware of until a few months ago, when a breathtaking view from 35,000 feet above the Earth truly inspired her.

Rollins was part of the 12-student research crew enrolled in Physics Professor Rhett Herman’s Arctic Geophysics course who traveled to Utqiagvik, Alaska, in late February for two weeks of research in the northernmost town in the United States.

On the flight to Utqiagvik, “we flew over Denali National Park, and I was able to see everything very clearly from the air that I learned about in my geology classes,” Rollins said, “and it was just so amazing!”

Her time in Alaska was well worth enduring the freezing temperatures, which regularly dipped below zero and felt much colder, with the wind chill dipping to 30-35 below Fahrenheit. Rollins gained invaluable experience conducting research and built a device to measure the vertical thermal gradient of the sea ice.

“Jasmine really got the research bug and surprised herself by engineering an extremely complicated sensor post that she stuck in the ice core holes,” Herman said while explaining Rollins’ research. “She generally threw herself into the work.”

It was the trip of a lifetime, Rollins said.

“I learned so much on the trip. Dr. Herman taught me how to make wires – I know how to make wires!” she said with excitement building in her voice – “and I learned the basics of coding and so many things I never imagined doing as a geology major." 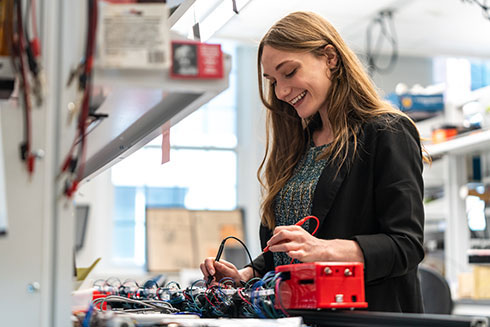 Throughout the Alaska trip, Rollins, who minors in physics, met a group of chemists and pilots from Chemistry in the Arctic, who were also in Utqiagvik conducting research. The more she talked with the pilots, the more she thought about pursuing another avenue she had never imagined, particularly for someone who planned to work as a construction industry engineer.

It was an idea Rollins revealed while talking to a TV reporter in Alaska.

“I want to fly planes for science,” she said with a bright smile.

Rollins has piloted a plane only once with assistance, but she is determined to learn. After graduating on May 7, she plans to return to her hometown and begin ground school with a friend who is a pilot. Her aspirations are to someday fly for the National Oceanic and Atmospheric Administration (NOAA), cataloging whale populations or flying through hurricanes to gather atmospheric readings.

Her parents are a little nervous about her high-altitude plans, Rollins admits. “They say, ‘why do you want to fly planes, Jasmine,” she said with a laugh, sitting in the space between Museum of the Earth Sciences and the campus planetarium.

“And at first, I thought it was crazy, too, but this is happening,” Rollins said with determination in her voice. “I’m so excited for my future. My time at Radford and that trip to Alaska really inspired me.”