Highlanders in the News: Week of May 16 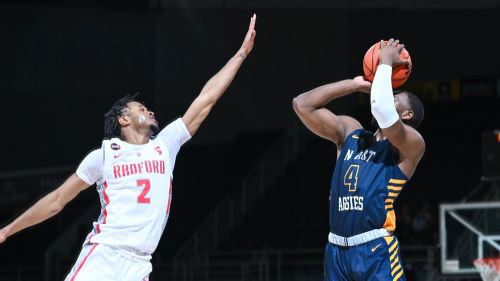 A May 18 piece for Sports Illustrated takes a fascinating look at the challenges many college athletes face, far beyond simply playing their best, and the story’s focus is a look at the recent case of Highlanders men's basketball guard Josiah Jeffers.

The hallowed athletics journal describes Radford as "a quaint, mountainside community with just north of 17,000 people” and name-checks the Dedmon Center before zooming in on Jeffers, whose brush with COVID-19 during his junior year severely limited his playing prospects with the team as a senior.

As a result, Jeffers tried his luck within the college basketball transfer portal — a potential way station for more than 1,400 players who decide to explore options with other schools and teams — but after circling the rounds, he decided to step back and remain with Radford.

"The portal can be a scary place for a lot of people," Jeffers told Sports Illustrated writer Jason Jordan.

It was not an easy ride, but Jeffers talks about the challenges he faced over the past year, on the court and off, and the success and scholarship options he ultimately found during what he deemed "a season of growth."

"It was up to me to deal with it," Jeffers told the magazine. "I had to really focus on that, and I noticed that mentality just helped me in every area of my life."

Two Highlander siblings seriously injured in a horrific 2017 interstate crash are back in the news this month, but for infinitely happier reasons, and this time they’re accompanied by their mom.

Sisters Malina Richardson ’17 and Maya Richardson ‘19, along with mother Dona Richardson, have all recently completed master’s programs through Liberty University.

The trio received their degrees at the May 5, 2022, ceremony on the Lynchburg campus. Malina and Maya studied health promotion, while Dona earned a Master of Education degree.

That celebration marks the culmination of a tumultuous half decade for the Richardson family.

A recent story on Liberty’s website recounts how, on March 30, 2017, the sisters’ vehicle was sideswiped by a tractor-trailer as they traveled along Interstate 64. Malina suffered severe burns in the crash but was freed from the wreckage by Maya.

A former cross-country runner for Radford University, Malina was hospitalized until late April that year but still managed to attend her undergraduate commencement the following week, as detailed by a WDBJ-TV news report at the time.

Younger sibling Maya walked away from the crash but months later discovered she had suffered extreme internal injuries. While her recovery is ongoing, she continues to receive treatment.

“All of our professors, classmates and so many others have stood in prayer with us, and we will be walking with all of them during commencement,” Dona Richardson told Liberty on the day of the ceremony.

“It’s really a full circle story that we started out with our separate degrees and fought again and again, literally through life and death,” Richardson said.

Since receiving her Bachelor of Business Administration degree in management and a commission as an ROTC military graduate from Radford, Olivia Nunn ’01 has covered a lot of ground.

She served multiple tours in Iraq as a chemical, biological, radiological and nuclear officer, spent 20 years in the Army and, post-retirement, has continued her higher education and moved into public affairs, among other endeavors.

This week, she showed up on yet another podcast, the U.S. Department of Veterans Affairs’ “Borne the Battle,” which features interviews with veterans.

It's Episode 277, from May 9, titled “Rising Through Two Transitions.”

In the 71-minute conversation, Nunn and host Tanner Iskra touch on her military experience, her brush with a mental health crisis and the steps she took to get help.

“Borne the Battle” is available on iTunes and other podcast platforms, and there’s a VAntage Point blog post about the episode that includes a direct link to the episode.