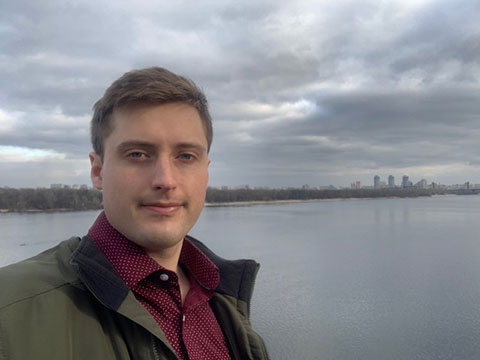 Wyatt Toehlke in 2018 with Kyiv, the capital city of Ukraine, in the backgound.

It was home for a semester. A place to make friends and establish connections, brush up on language skills and create memories that last forever. It was an opportunity for Wyatt Toehlke ’18 to study in a land that has forever captured his interest and imagination.

“I still remember being there, the vibe around the city and thinking how wonderful it was,” Toehlke said. “It made me think of the second world war, which had ripped through there, but I would not have thought then that there would be another full-on invasion and shelling of the city."

“It seems like something from the past, and it seems unreal to watch it on the news.”

“It was a tremendous opportunity for me to immerse myself into the culture and polish my language skills,” he said. But, in early March, when Russian forces invaded their neighbors to the west, Toehlke saw the place that is forever emblazed in his memory suffer catastrophic damage and unimaginable suffering.

It was especially harrowing and frightening to see images on the news of the university where he studied endure heavy damage from the attacks. “Some friends were sending me pictures from over there,” said Toehlke, speaking of the roommates, Sergei and Ruslan, he lived with in Ukraine. “The school and the whole city center were shelled and on fire. It was awful.”

Toehlke, a Virginia Beach, Virginia, native, studied in Ukraine because of his interest in history, politics and international relations. “I was definitely interested in learning about the part of the world that begins with Germany and goes east,” he said, “especially Russia and the post-Soviet space.”

Toehlke was enrolled in a Russian language class at Radford during his senior year when Professor of Political Science Paige Tan, Ph.D., suggested that if he wanted improve his language skills, he should consider a study abroad immersion. Toehlke then talked with advisors in what is now the McGlothlin Center for Global Education and Engagement, which supported and sponsored Toehlke’s journey.

Following those initial meetings, Toehlke “spent night after night staying up late communicating with representatives from schools in Russia, Belarus and Ukraine,” he said. “Finally, I picked the one in Ukraine. Radford approved and gave me a scholarship to go there, which was awesome.”

Always a student of history, Toehlke picked Ukraine partly because, at the time, it was about three years after Russian invaded the area in 2014, and he wanted to learn firsthand how the people there were moving on in the aftermath. “It’s a part of the world that’s had such an effect on history,” he said. “It just seems so historically significant and forgotten about sometimes.”

Plus, “it was a very interesting place because it was sort of where the lines blurred between the people who considered themselves Russian and those who thought of themselves as Ukrainian. I found that interesting, and it factored a lot into my decision to go there.”

The study abroad experience lasted only a few months, but Toehlke said “studying in Ukraine was one of the best experiences of my life. Plus, I’ve always wanted to do something internationally based for my career, and so being there and learning there lends a bit more credibility.”

That thinking led Toehlke to explore more opportunities in Ukraine, which led to an internship with the State Department at the U.S. Embassy in Kyiv. The application pool was competitive, but Toehlke had an advantage, he said, from the two independent studies courses he took at Radford and the support he received from political science professors Paige Tan and Tay Tan, Ph.D.

“Who knows? I might not have gotten that internship if it had not been for the guidance and mentorship from those Radford faculty,” said Toehlke, whose mother is a pre-school teacher and father is a Navy SEAL. “They gave me the structure, which I needed at the time as a college kid, and a lot of professionalism and know-how.”

Like the study abroad experience, Toehlke said the internship was one of the most rewarding experiences of his life. He gained on-the-job experience in international relations and he had a chance to “meet some pretty interesting people, too,” he said,” such as Olena Zelenska, the wife of Ukraine President Volodymyr Zelenskyy, then-Secretary of State Mike Pompeo and former U.S Ambassador to Ukraine William B. Taylor.

“I got to be on the front line of a very important place in American foreign policy,” Toehlke said. “And I have Radford to thank for it.”

These days, Toehlke works in international commerce and trade in Richmond, Virginia, but his thoughts continue to be with his friends and their fellow Ukrainians as the war in their homeland rages on. “They’re my boys,” he said with pride and concern for his roommates. “And they’re having a pretty rough go of it.

“I've noticed a different tone when I asked about their plans now,” Toehlke continued. “’We're ready to protect our land from the invaders,’ they said to me. It’s a different attitude, for sure.”