Highlanders in the News: Week of March 21 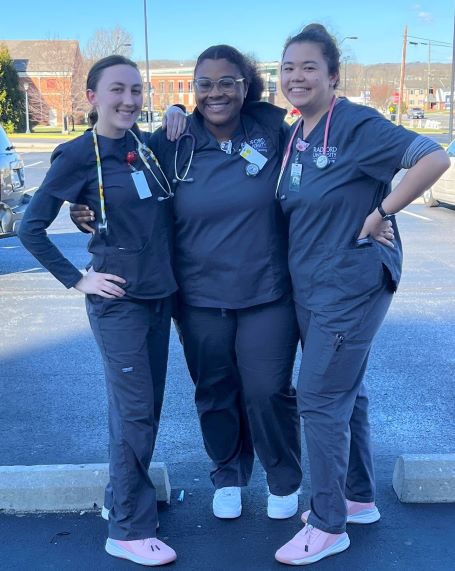 Earlier this month, Radford University nursing students (L to R) Eleni Frank, Mccallum Parrish and Emily Cha encountered a Salem driver who was suffering a medical emergency. The trio gave assistance and, on March 22, their story was reported by WDBJ-7. (Photo courtesy of WDBJ-7)

Nursed back to health

Here are two textbook examples of the opposite extremes of everyday fortune.

Suffering a medical emergency while behind the wheel of a vehicle? That would be very bad luck.

Being subsequently stumbled upon by a carload of nurses in training, however? Much better. In fact, coincidences don't get much more fortuitous than that.

Both actually happened in Salem, Virginia, just last week, and they involved a trio of students in Radford University's nursing program.

WDBJ-7 recently reported the March 19 incident in which Emily Cha, Eleni Frank and Mccallum Parrish came across a van stopped on South College Avenue and realized the driver needed help.

The three had just finished their clinicals at LewisGale Medical Center, according to reporter Ashley Boles' story, but they got back on the clock in a flash.

A quick exam told them the man was not breathing, so Cha – who is the chief of Radford University Emergency Medical Services – began CPR while Parrish called 911. Paramedics arrived soon after.

"When they were able to resuscitate him, and he was awake and talking, we all came together and hugged each other, one big circle,” Frank told WDBJ-7.

Robin Davis, an adjunct professor with the School of Nursing, said Cha later phoned her to relate the experience. Davis initially feared her students had been the victims of an emergency instead of the Samaritans.

"Then she went to tell me, and it turned from panic to, like, 'Oh, my God, this is so great," Davis exclaimed.

An expansive database compiled by Radford University students continues to be cited in media reports about the changing patterns and perceptions of serial killers.

One of the most recent examples is a Discover magazine article called “What Explains the Decline of Serial Killers?” which uses Radford’s information and statistics to address the story’s title question.

The story notes that the 1980s reportedly endured nearly 770 serial killers operating in the United States, while the decade that followed saw just under 670. That downward decline continued, and by 2016, it appeared there were slightly more than 100, according to the story.

“These criminals that terrorized and captivated a generation quickly dwindled,” writes Cody Cottier, a reporter for Discover. “Put another way, 189 people in the U.S. died by the hands of a serial killer in 1987, compared to 30 in 2015.”

The article considers a variety of possible explanations for that change, including the growth of forensic science; the threat of longer prison sentences; the absence of easy targets due to the presence of cell phones and security cameras; and the general public’s increasing awareness of potential threats.

In the story, Radford University Professor of Psychology Michael Aamodt, Ph.D., who supervised the creation of the database, recalled the unsupervised walks and bike rides he often took as a young child of an earlier generation.

“You wouldn’t let your kids do that today,” Aamodt told Discover.

But he disagreed with a floated theory that the serial killers of yesterday have simply been recast as the mass shooters of today: “The motivation for a mass killer versus a serial killer tends to be different.”

The Grunge also recently delved into Radford’s database in order to probe the potential causes for the waxing and waning of the phenomenon.

Prior to that, In Touch Weekly last year referenced Radford University’s work in a piecer on killers who have been caught but remain alive and in custody.

The website The Serial Killer Information Center contains profiles of 4,743 of history’s most infamous murderers.

A “Good Reason” to listen

A recently rebroadcast installment of a popular show on public radio includes insight from Radford University.

The March 11 episode of “With Good Reason” focuses on mass shooters and targeted shooting incidents and features interviews with four faculty members with thoughts on the subject.

One of those experts is Phil Mongan, Ph.D., LCSW, coordinator of the Master of Social Work program.

Mongan discusses numerous aspects of mass shooters, including why they so often seem to be male, how bullying factors into the equation and how some assailants’ violent behavior often seems to come without warning.

"Very few of them had a previously diagnosed mental illness,” Mongan says during his interview.

“There’s a habit of going back after the incident and using the incident to diagnose them,” he explains, but adds, “Overall, people who have a diagnosis of mental illness are less violent than the population that does not.”

Listeners who go to the “With Good Reason” website can access the entire hourlong episode or select separate interviews with the individual speakers. Mongan’s chat runs approximately 12 minutes.

Another interview on the program touches on a shooting incident that occurred at a satellite location of New River Community College, in Christiansburg, in 2013.

Produced by the Virginia Foundation for the Humanities for the Virginia Higher Education Broadcasting Consortium, “With Good Reason” is broadcast on public radio stations in 15 states, including Virginia, New York, Texas and Tennessee, as well as Washington, D.C.