Highlanders in the News: Week of March 28 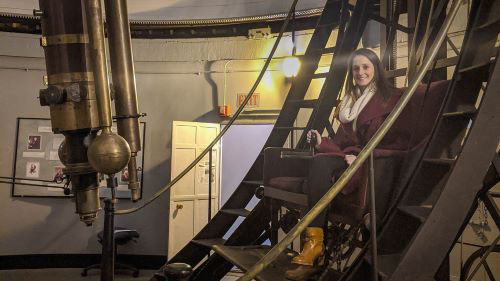 Jordan Eagle ’16, is set to receive her Ph.D. from Clemson University in August. Through a postdoctoral fellowship, Eagle will continue her studies at Maryland’s NASA Goddard Space Flight Center. (Photo courtesy of Clemson News)

A Highlander alumna’s pre-doctoral fellowship two years ago sent her to the Harvard & Smithsonian Center for Astrophysics in Cambridge, Massachusetts. Now, a postdoctoral fellowship will allow her to continue her studies at Maryland’s NASA Goddard Space Flight Center.

Jordan Eagle ’16 is set to receive her Ph.D. from Clemson University in August, according to a March 25 story posted by the school. The article announced that Eagle was the recent recipient of a NASA Postdoctoral Program Fellowship and, prior to that, a Chandra X-Ray Center Fellowship.

and the role they play in creating cosmic rays.

“At Goddard, Eagle will use the population of gamma-ray emitting [pulsar wind nebulae] from her thesis to predict what these objects will look like as lower-energy gamma rays. The lower-energy gamma-ray band is the least explored part of the light spectrum, so Eagle will focus on realizing the scientific promise of a future NASA mission that will probe these energies,” the report said.

“There’s still a lot we don’t understand in terms of the energetics of pulsar wind nebulae, which prevents us from understanding overall how these objects contribute to cosmic rays,” Eagle said.

In addition to her academic work, Eagle and four other female astrophysicists have launched a YouTube channel called (On) Planet Nine, with the goal of explaining physics simply, in terms that are accessible, interactive and entertaining.

As of March, (On) Planet Nine had a library of 16 videos, including several clips that feature Eagle discussing light and matter, Kepler’s Planetary Laws, Newton’s Laws of Motion and other topics.

One month and a day after Russia launched its ongoing invasion of Ukraine, a Roanoke television station reached out to faculty at local universities for a status report on the assault.

Radford University criminal justice instructor Don Martin was among those approached by WFXR for its March 25 story on the state of the conflict. He previously served as counsel to both the Central Intelligence Agency and the Senate Select Committee on Intelligence.

Martin said he believed Russian President Vladimir Putin underestimated the Ukrainian resistance, which has proven more formidable than expected, and he said widespread disapproval of the invasion, and the resulting sanctions, have left both Putin and his country “an economic pariah.”

“I think Putin has made a colossal mistake,” Martin told WFXR. “There is no way that he intended to be stalled in Ukraine a month after the invasion.”

He also said he believes Ukrainian President Volodymyr Zelenskyy has made canny use of social media, in sharing images of the resulting destruction and gaining public support internationally.

Last month, on Feb. 25, less than 24 hours after Russia began its push into Ukraine, Martin was part of a group of faculty members from the College of Humanities and Behavioral Sciences who held a live discussion on the implications of the aggression by both Russia and Putin.

“He simply cannot abide a democratic, free Ukraine right there on his doorstep,” Martin said at the time.

The company you keep?

A WalletHub story on March 9 went in search of the happiest cities in the United States and – drawing from a pool of the country’s 182 largest municipalities – it ran metrics on factors related to emotional and physical well-being, income and employment, and community and environment.

Once all the numbers were crunched, more than half the Top 10 were in California, with Kansas, Washington state and Wisconsin also making the grade.

While the closest Top 10 happy place to Southwest Virginia was Columbia, Maryland, WalletHub did check in with a local source – Radford University professor of psychology Jay Caughron, Ph.D., who wondered whether happiness has more to do with the real estate or the neighbors.

“I think the more pertinent question is the people you are around, and this can vary by location,” Caughron said. “If you move to Appalachia because you like hiking, are you happier because you get to hike or because you make friends with others who enjoy the same activities and lifestyle?

“If you move to a place that has more opportunities within your career field, is it because of the place or because you are seeing forward progress in your life goals? Probably a bit of both.”

The complete rankings, as well as expanded comments by Caughron and others who weighed in, can be found at WalletHub.com. Shorter versions of the story also appeared on simplemost.com and in a report by KTVQ.