Highlanders in the News: Week of Feb. 28 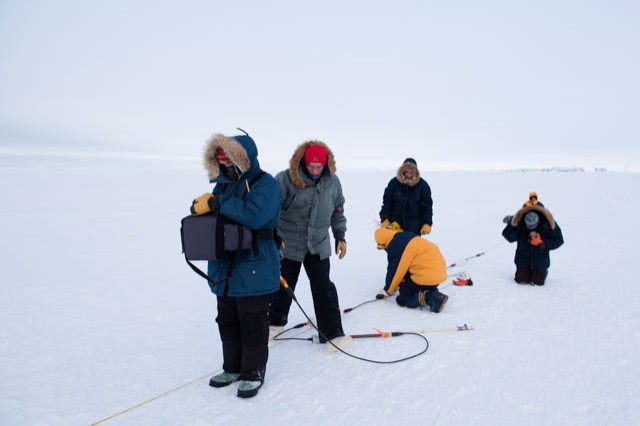 Rhett Herman Ph.D. (in red cap) during a previous trek to Utqiagvik, Alaska, helping students prepare a device to collect data from the sea ice.

In the name of science, a group of Highlanders, once again, will trek more than 4,600 miles from campus to visit the northernmost city in the United States.

They're geophysics field research students, led by Radford University physics professor Rhett Herman Ph.D., and they're headed to Utqiagvik, Alaska, a village of just under 5,000 people situated 300 miles above the Arctic Circle.

While in Utqiagvik, the young researchers will conduct experiments using sensor boxes they built and plan to deploy on the sea ice, and they’ll also study topics of their own development.

Herman has led these trips every other year since 2006. He has said they're designed to accomplish three key objectives – to convey that science does not have to be done on a big budget; give students a broader perspective outside their comfort zones; and help them build self-efficacy and self-reliance.

A Feb. 24 story by WDBJ-7 discussed Herman's and his students’ most recent journey and their goals. 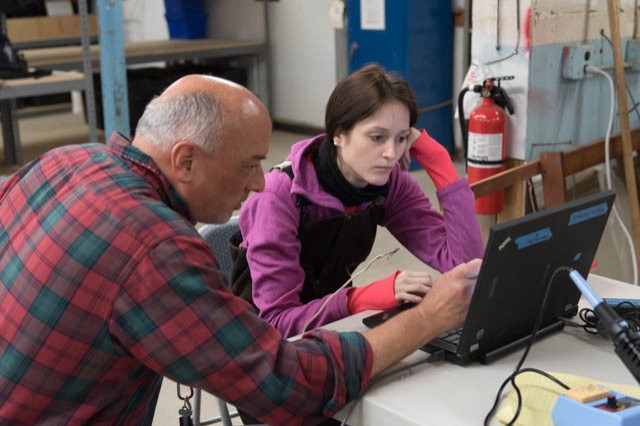 During a prior visit to Alaska, Rhett Herman Ph.D and student Jordan Eagle '16 review data collected from a probe.

“It has evolved from being all about my research, up in the Arctic, to having the students choose their own projects," Herman told WDBJ-7. "They all have plans, and hopefully, this will help them get to their plans."

“I think the biggest thing that we’re getting out of this experience is really hands-on work,” said Sami Reitz, a senior physics student from St. Louis, Missouri.

“Paper ideas. We built them and created them, and now we’re going to the field and applying them,” Reitz explained.

The group departed on Feb. 25. Most will conduct their research for a full week, but others plan to return on March 12.

For about 1,500 years, Utqiagvik has been home to the Iñupiat, an indigenous Inuit group. The city’s name, derived from the Iñupiat word "utqiq," reportedly means a place for gathering wild roots.

Herman's trips previously were the subject of a Radford magazine story in 2020, and more information about the program itself is available online here.

On Feb. 25, one day after Russia launched a hostile invasion of neighboring Ukraine, the College of Humanities and Behavioral Sciences hosted "a conversation to better understand the unfolding situation."

The discussion, held in Hemphill Hall and accessible virtually via Zoom, was covered by The Roanoke Times.

During the talk, the group concluded that the invasion was the product of years of effort by Russian President Vladimir Putin "to dismantle Russia's free press and build a sense of nationalism that has bolstered his power," reporter Alicia Petska wrote.

Panelists said the invasion of a sovereign nation both violated international law and underscored the limitations of the powers of laws. Putin’s actions were "predictable," according to Martin.

“He simply cannot abide a democratic, free Ukraine right there on his doorstep that his citizens could see right there and model and wonder why can’t they have those freedoms," Martin declared.

"He has said again and again that he wants to restore the Soviet Union," Martin added, but later commented on Putin's brutal methods and drastic approach: "At the end of the day, we may care more about Russians than he does." 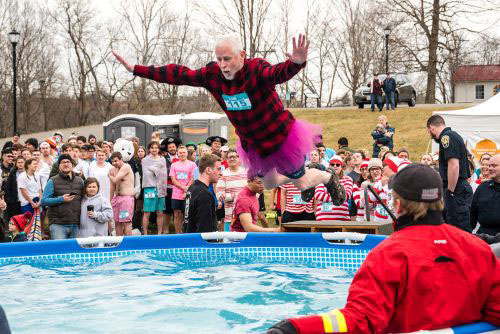 Taking the “Plunge” for a good cause

Southwest Virginia's largest fundraiser for the state's Special Olympics – the annual New River Polar Plunge – has long been a staple activity for Highlanders, and this year's event, held on Feb. 26, was no exception. It was advanced by WSLS-10 news.

Plunge participants, frequently dressed in colorful costumes, pay $100 to take a public dip into wintry water, normally by springing off the banks of the New River.

After being held virtually last year, the chilly challenge was set for a live return to Dudley's Landing at Bissett Park. Due to safety concerns over recent heavy rains, however, it was relocated to an above-ground pool on Robertson Street, near the Radford City Police Department.

"I plunged, and we had a good number of current students, staff and RU alumni there in the cold," said Radford City Mayor David Horton ‘90.

Frankie Fitzgerald ’81, president of the New River Valley Alumni Chapter, was one of a group of Highlanders — along with his wife Hollie Fitzgerald ’05, Tom Cruise '99 and Jonathan Beasley '07, among others — who took the plunge as part of the Chillbillies, a team that contributed $3,436 to the Special Olympics cause this year.

Of the new location, he added, “I think most of the team would’ve rather jumped in the river, but it was a different thing. It was fun. There was a lot of people there. And it was pretty durn cold.”

Even with the abrupt change of venue, some 50 teams showed up, and the event as a whole still brought in $56,000, according to WSLS-10.