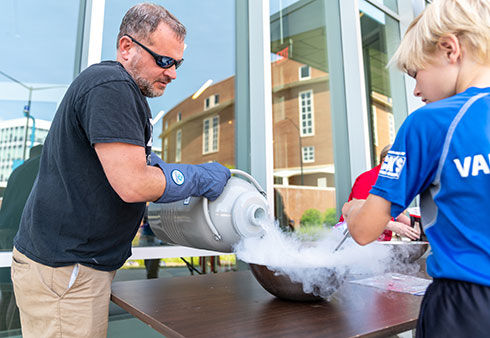 “I like the huge galaxies,” Sky Vandergrift said in between hurried licks of ice cream, moments after landing back on Earth following an epic journey past the moon, sun and into the universe.

“It’s a huge dome,” the 8-year-old continued, briefly describing, between swift licks of cookies and cream, the Radford University Planetarium, the vehicle that virtually blasted her into space.

“And, all the stars in the Milky Way,” Vandergrift explained, her voice rising with excitement as drips of ice cream raced down her right arm. As she spoke, a small cloud fluttered her way from the liquid nitrogen that Department of Chemistry faculty members were pouring into a bowl to make more ice cream to serve to hundreds of kids – and many adults – during the two-day James Webb Telescope Community Event on campus June 10 and 11 in the Center for the Sciences.

The event was held, in part, to celebrate the Webb telescope, which NASA launched in 2021 as its next great science observatory, and to give astronomy and science enthusiasts of all ages a chance to learn about the telescope and the images it will begin transmitting back to Earth in July.

Overall, it was a celebration of science, offering numerous events, games and activities to build excitement about STEAM (science, technology, engineering, arts and mathematics) education.

Vandergrift was there with her 13-year-old brother, Everett, who was assisting Geology Professor Emeritus Skip Watts with drone demonstrations, and her 10-year-old brother, Jace, who, with a dot of ice cream on his nose, said the event was “really cool,” partly because he loves “discovering stuff.”

Throughout each day on Friday and Saturday, eventgoers had a chance to view shows inside the planetarium, experiences that took them to the moon and through the galaxy to explore exoplanets. Another show explained the history of the Webb telescope and explained its position and mission. Radford University Assistant Professor of Physics Sandy Liss, Ph.D., ran the Friday shows, and physics major Kaleb Martin of Newport News, Virginia, operated the Saturday shows inside the planetarium, which with recent upgrades, now features the Digistar 7 projection system. 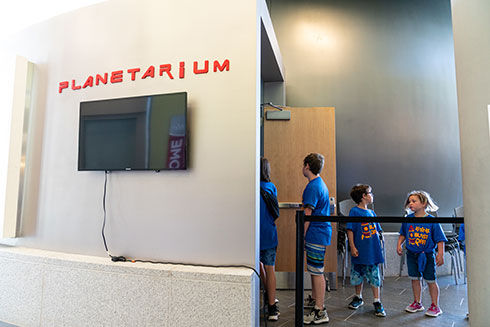 A line forms to enter one of the many Radford University Planetarium shows throughout the two-day event.

After a show, eventgoers had an opportunity to attend a virtual presentation from Francisco Muller-Sanchez, Ph.D., an astrophysicist at the University of Memphis who spoke about his research that will use data from the James Webb Telescope to explore active supermassive black holes.

Outside the planetarium’s doors in the lower level of the Center for the Sciences sat multiple opportunities to learn about what is beyond our atmosphere, but also what resides here on Earth. Across the hallway and just steps beyond the camera that was providing a Facebook live feed, the Museum of Earth Sciences showed off its wide array of exhibits, including Stan the T-Rex, the “velociraptor in the flesh,” a fluorescent mineral display and a unique and beautiful exhibit of rock and mineral specimens from all over the world.

In classrooms down the hallway, Radford’s Department of Biology gave kids materials to build an alien. But not just any alien: they had to construct the lifeform in a way that would allow it to live comfortably on one of three fictional planets created by Associate Professor of Biology Jason Davis, Ph.D. Pointing to one of the colorful planets, Davis described how the exercise worked.

“This planet is not as big as Earth, so everybody's a little bit lighter there,” he explained in detail. “And it's pretty cold, but its days are a little shorter, and its years are super, super long. And, it's really cold on this planet. So, if you might create something that is furry, or really round, so it doesn't get cold as fast. Or it might live underground.”

Next door, in the Novozymes Biology Lab, eventgoers watched Associate Professor of Inorganic Chemistry George Harakas, Ph.D., demonstrate glass-blowing, and just a few feet away, children could hear about space communication from Professor of Mathematics and Statistics Neil Sigmon, Ph.D. There was also an opportunity to paint colorful bookmarks depicting the Webb Telescope.

That was perfect for 7-year-old Esma Cuskovic, who said her favorite thing about space was “all the pretty colors.”

Cuskovik was one of many students who attended the event with Rainbow Riders Childcare Center in Blacksburg, Virginia. It just happened to be “space week” at the center, said Alexa Harmon, a teacher at Rainbow Riders. “this event worked out perfectly for us, and it is great for Radford to offer this opportunity for the kids to get out and do some science activities.”

For adults and older kids looking to explore their creative side, Wine and Design of Christiansburg offered an instructional course for participants to paint a picture of the Webb Telescope and its surroundings. Radford University M.F.A. student Sydne Moseley taught the course. “I just guided them along,” she said modestly. “Some girls painted their planets pink, and that was the point, to have fun with it.”

If fun and learning were the measures of success, the event turned out to be an enormous triumph.

“This is such an amazing event,” said Kerry Vandergrift, Sky’s and Jace’s mom, as she watched her children interact with the chemistry faculty members mixing sugar, heavy whipping cream, half-and-half and liquid nitrogen into yummy ice cream. “They love science anyway, but I feel like anything that can be hands-on for them is really just so engaging. And we love the exposure to different people and different kinds of sciences all in one place.”