Highlanders in the News: Week of June 13

According to a recent study by Moody’s Analytics, rising inflation this year has caused the average household in the United States to spend about $460 more per month than it did in 2021.

It’s an issue that extends across the globe, and WFXR News recently spoke about it with experts from Virginia Tech and Lynchburg College, as well as Radford University’s Assistant Professor of Economics, Jennifer Elias, Ph.D.

In a June 12 story by the Roanoke news station, Elias talked about the kinds of purchases consumers should make and those they might want to avoid in the current climate, as well as methods to find potential relief in paying off loans.

She also explained that inflation could actually be good for some borrowers during this period when cash-on-hand now conceivably has a higher value than the same amount of money will in the future.

Elias has actually spoken to WFXR News about the issue twice over the past two weeks. On June 8, she also discussed the phenomenon of “shrinkflation,” in which prices on some goods remain the same, but the quantity consumers receive is reduced. 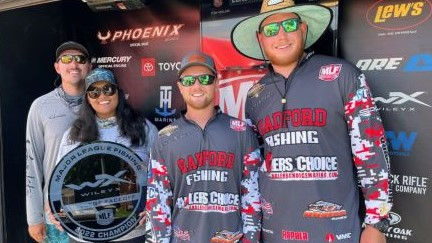 All about that bass

It took a lot of fish to win the Major League Fishing College Tournament, held June 4 in Huddleston at Smith Mountain Lake, and that’s exactly what the Radford fishing team delivered.

All told, the university’s team during the single-day tournament caught 15 bass – weighing in at a total of 30 pounds and 14 ounces – and took home the top spot, edging out Tennessee’s King University by just over three pounds. Teams from Western Michigan, Virginia Tech and Penn State rounded out the remaining spots in the top five, respectively.

In a June 7 story by Major League Fishing, Radford University’s team talked about its strategy, how the plan changed just one day before the competition and the ways it allowed the group to reel in more than a dozen fish for the win. The tournament results were also covered by Bass Resource.

Norton and Clark will be competing for the team again in September, in Sandusky, Ohio, on Lake Erie.

The full quartet also qualified to fish in the national championship next year, Clark said.

One of the best-known performers to emerge from Radford University is Jayma Mays ’00, who got her start on the “Friends” spin-off “Joey” and the thriller “Red Eye” and went on to play key roles on such long-running TV shows as “Glee” and “Heroes.”

More recently, she appeared in the Tom Cruise smuggling yarn “American Made” and the 2020 comedy sequel “Bill & Ted Face the Music.”

On June 9, the Virginia Production Alliance – a professional association that supports film and television projects across the state – tweeted a quick shout-out to the Grundy, Virginia-born actress with a photo and a brief biography, listing some of her best-known work.

Next on Mays’ horizon: The Thanksgiving Day release “Disenchanted,” a follow-up to Disney’s 2007 fairy tale spoof, “Enchanted,” with Amy Adams and James Marsden reprising their roles from the original. The feature film comedy opens on Nov. 24.