Accounting professor Bruce Chase built programs from simple motto: “Why can’t we do that?” 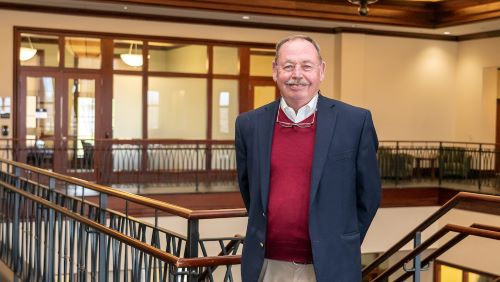 In the early 2000s, when Bruce Chase, Ph.D., CPA, had just completed the first third of his nearly 30 years as a professor of accounting at Radford University, he launched a vital and far-reaching business program, almost as an afterthought.

Chase was researching audit fees for local governments and reached out to the Virginia Government Finance Officers Association to see if it would forward his questionnaire to its members. The VGFOA obliged him and asked if he’d be interested in running some workshops.

From that initial partnership, Chase and the organization ultimately hatched a plan for a much larger endeavor: A comprehensive certificate program to train local government personnel in accounting, administration, budgeting and other areas, to be run jointly by the VGFOA and Radford University.

At that time, neither Chase nor the agency had any guarantee there would be extended demand for such a program, but they gave it a shot anyway.

It was a gamble that paid off. Today, roughly 20 years later, some 271 ranking professionals have completed the 10-workshop curriculum.

Scan its list of graduates, and you’ll see chief financial officers, treasurers, finance directors, division chiefs, budget analysts and accountants from across the state, from Accomack to York counties.

Certificate recipients also include personnel from public school systems, water authorities, social services, law enforcement and the Virginia Department of Transportation, among others. The program shows no signs of slowing as it extends a brand that is close to Chase’s heart.

"If you go into the finance offices of many of Virginia's state and local governments,” he said, “you're likely to see a certificate with Radford University's name on it.”

Ann Shawver, a certified public accountant and former VGFOA board president, previously taught at Radford as an adjunct instructor and has known Chase for more than 20 years.

“This certification program is something I think that makes Virginia’s finance officers very strong… and Bruce is just a huge, huge part of that,” Shawver said.

Chase, who retired from Radford after three decades in December 2021 and was designated a professor emeritus in February 2022, was also the catalyst behind numerous other successful initiatives that emerged from similarly modest beginnings.

“I think that from my prior professional experience before joining Radford, I was able to ask, ‘Why can’t we do that?’” he reflected.

Indeed, while his career path has always involved business and accounting, it ranged widely before he entered the realm of education.

Early on, Chase worked for the Virginia Auditor of Public Accounts and also at Coopers and Lybrand, one of the country's oldest accounting firms. He earned his MBA and Ph.D. from Virginia Commonwealth University and served as that school’s treasurer for three years. He later spent nearly a decade as chief financial officer of Southern Seminary College (now Southern Virginia University).

Shortly after completing his Ph.D. in the early 1990s, a newspaper ad led him toward a position as an accounting professor at Radford University.

"It was just a good fit," he recalled.

The Governmental and Nonprofit Assistance Center he founded in 2005 – which offers technical assistance and financial education to governmental and not-for-profit entities – provides seminars and workshops in public sector finance and management. Because the GNAC collects fees for its services, it remains self-supporting.

Joy Bhadury, Ph.D., dean of the Davis College of Business and Economics, which hosts the GNAC, said that “while Dr. Bruce Chase has always been an accomplished faculty member in terms of teaching and research, undoubtedly his greatest contribution to the Davis College is the founding and continued leadership of the Governmental and Nonprofit Assistance Center.”

“It was clearly a niche that was not being served by any existing business school in the Commonwealth at that time,” Bhadury continued.

Another of Chase’s projects has also proved to be a longtime boon to both the university and its students: Firm Night, an annual networking event which Bhadury called “the most important recruitment event for our accounting and finance students.”

It’s an exposition that brings to campus employers from major accounting and finance firms – including Ernst & Young, KPMG and Brown Edwards – and creates a forum in which students can connect with them. More than 20 firms attended Firm Night in October.

“Without Bruce Chase, we wouldn’t have Firm Night, and without Firm Night, we’re not giving those students the best opportunities to meet future employers,” Ann Shawver said.

“At the most recent Firm Night, [Chase] helped me get into the internship that I’m doing this summer, at Brown Edwards, for auditing,” said Jordan King ’22, who was named the Outstanding Student in Accounting. Chase previously taught King’s mother, Stacy, who’s also an accountant.

Candice Otey ’07, MBA ’08, is a senior recruiting manager for Sherpa, and has worked as a chief financial officer and chief accounting officer for Air. T, Inc.

“Dr. Chase took me under his wing and became my lifelong mentor and friend. He was instrumental in my decision to choose accounting as my major,” she said. “To come full circle, I achieved my dream to be the CFO of a public company.”

“Over the years, I have been able to hire promising accounting students as interns for the Center,” Chase said. “It gives me great pleasure to see them excel in their professional careers after graduation.”

Chase was also central to linking the university to the Government Finance Officers Association’s Certified Public Finance Office program, facilitating the school’s administering and scoring of that national program’s exams. From 2004 to 2015, that program’s brochures – some 20,000 of them – went out bearing the name and logo of Radford University.

Since retiring, Chase has stayed busy conducting workshops for the GNAC and assisting its transition to new leadership. He and Debra, his wife of 48 years, live in Radford and have two grown children, Joseph and Abbey.

Among other honors, he has been awarded the Association of Government Accountants National Education and Training Award, The Virginia Society of Certified Public Accountants’ Broadus Award and the VGFOA Outstanding Service Award.

"I have rarely come across a colleague like Bruce, who goes out of his way to never brag despite the extraordinary professional success he has achieved,” Dean Bhadury said.

“I owe a big part of my success with the GNAC to the encouragement and support I have received over the years from my department heads and the deans of the college,” Chase said.

“I believe the GNAC has had a positive impact on the financial management of local governments in Virginia.”