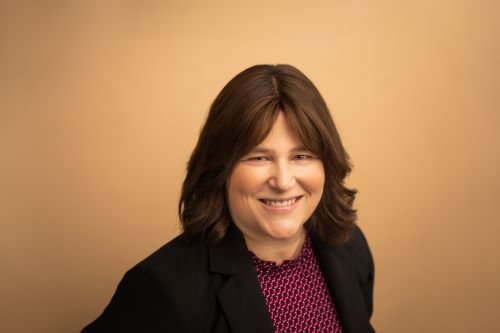 A professor and prolific classical musician, Stephanie Caulder, D.M., has been chosen as dean of the College of Visual and Performing Arts at Radford University. Her inaugural term will begin on Aug. 1.

“I am honored to have been selected,” Caulder said. “The disciplines represented within the college have a unique ability to foster imagination, innovation, inclusivity, and a sense of belonging.

“Our world needs creative leaders and solutions to continue to deliver on the promise of higher education,” she said. “The CVPA plays a transformational role in the lives of our students as well as our community, and I am excited and grateful for the opportunity to help continue to fulfill that promise.”

Caulder, a native of Wilmington, North Carolina, also joins Radford as a professor of music. She previously taught music at Indiana University of Pennsylvania (IUP).

In 2020, Caulder received the Distinguished Faculty Award in creative arts at IUP, where she served as both chair of the Department of Music and coordinator of graduate studies.

“Dr. Caulder describes administrative work as a calling and a craft, and she considers facilitating the work of faculty and students and helping them to achieve success her favorite part of administration,” J. Orion Rogers, Ph.D., interim provost and vice president for academic affairs, recently said.

Caulder has been the principal oboist with IUP’s Keystone Wind Ensemble since 2002 and Pennsylvania’s Johnstown Symphony Orchestra since 2014.

In her capacity as a musician, Caulder has appeared alongside such artists as Joshua Bell, Marvin Hamlisch, Mannheim Steamroller, Bernadette Peters, Frank Sinatra, Jr. and others, and with symphonies from Altoona, Tallahassee, Pensacola, Greensboro and Wilmington. In October 2015, she toured Russia with the IUP Faculty Woodwind Quintet, presenting master classes at the Rimsky-Korsakov Conservatory in St. Petersburg and at Moscow’s Wind College.

As an author, Caulder has published articles for the North Carolina Music Educators Journal and the Double Reed, a quarterly magazine.

She is an active member of the College Music Society, Pi Kappa Lambda, the National Association for Music Education, the Pennsylvania Music Educators Association and the International Double Reed Society and is a national honorary member of Delta Omicron.

Caulder earned her Doctor of Music in oboe performance from Florida State University in 2005. She received her Master of Music degree in multiple woodwind performance in 2000 and her Bachelor of Arts in Music in 1998, both from the University of North Carolina at Greensboro.

As dean of the College of Visual and Performing Arts, Caulder succeeds Margaret Devaney, whose tenure ran from 2014 until her retirement late last year.

CVPA offers its students artistic and academic excellence across all arts disciplines – art, dance, interior and fashion design, music, theatre and cinema. The college also offers a rich calendar of events each year that bring to the campus and to the community a vibrant variety of plays, concerts, dance performances, design and fashion shows and other exhibits.