For professor, music’s the path to teaching kids math 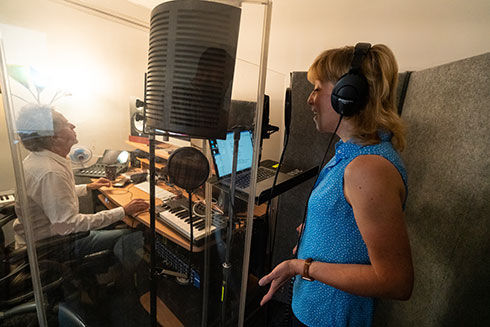 “Nellie the hen went for a stroll.

She saw her friends, and she clucked, “Helloooo!”

Back at her nest, what did she find?

Imagine hearing the above lyrics sung softly over a bluesy tune with an easy guitar strum and a dobro occasionally sliding in.

“How many eggs does Nellie have now?

Careful, though. You might find yourself humming “Nellie’s Nest” all day.

Radford University Associate Professor of Music Jennifer McDonel, Ph.D., penned those lyrics and the catchy tune that plays along after reading over a mathematics exercise for toddlers. In fact, she wrote the music and lyrics for 22 similar songs over the past year as part of a project she is working on with Zero To Three to help children ages 2 to 5 better learn math through music.

Zero To Three is a Washington, D.C.-based organization that strives to help babies and toddlers learn through early educational connections that are important to their development. The organization knew McDonel through her work implementing a new music and character development program at Primrose Schools, called “Harmony & Heart,” that McDonel developed.

McDonel, director of music education and associate director of the Office of Undergraduate Research & Scholarship (OURS), received a grant from Zero To Three in 2021, and once she received the mathematics curriculum from the organization, the creative juices began to flow.

How does someone write music and lyrics to accompany math activities?

“I don’t know,” McDonel said with a laugh before providing a seemingly easy-as-1-2-3 explanation into her creative process.

“As a musician, I review the material from Zero To Three and think of a song in my head,” she explained. “I sometimes think of a rhythm first, and then I think of the words. I like to make rhymes because it helps young kids to remember if the words and phrases rhyme.”

“Nellie’s Nest” is a perfect example.

“Nellie the hen went out to eat.

She nibbled some apples; they were so sweet.

Back at her nest, what did she find?

One more egg; what a nice treat.”

The goal for the songs, from McDonel’s perspective, is to give children “a really rich musical listening vocabulary,” she said. “If we create these rich pathways for kids to learn in a playful environment, it just gives them that holistic learning experience.”

The songs, McDonel said, aren’t meant for the kids to memorize or learn to sing. “That’s not the point,” she noted. “I wanted to create songs with lots of tonalities and meters and musical styles so that they listen along with the activities that are based in movement and are fun and also reinforce the mathematics concepts.”

McDonel doesn’t only write the lyrics; she sings the songs, too. It will be her voice kids hear in each song, and the music and production will come, in part, from Radford Assistant Professor of Music David Rivers.

Rivers, who directs the university’s music business program, used his Nashville ties to locate a studio and a musician to record some of the songs this summer in the Music City.

“Dave would listen to the songs I created and get a feel for the style, and then he was able to translate that style and use different instruments to lay down different tracks to make it sound really cool,” McDonel explained. “It was so fun for me, and all these kids’ songs I had written were coming to life with Dave’s musicianship underneath them.”

Going into the recording sessions, McDonel and Rivers planned for each song to have a particular style and “not sound like a kids’ song,” McDonel said. Just as “Nellie’s Nest” has a “bluesy Muddy Waters sound,” Rivers said, the others incorporate elements of jazz, rock, country and pop. “A couple sound like a Renaissance ball, one has a Jimmy Buffett island vibe and another sounds like an ’80s Billy Idol song,” Rivers said.

Once the project is finished later this year, parents and early childhood educators can access the songs along with the accompanying math curriculum, for free, on the Zero To Three website at https://www.zerotothree.org/resources/4481-problem-solvers. McDonel’s and Rivers’ work will significantly support early childhood development and advance the well-being of children with access to the program.

“This work is important to me because I strongly believe in the value of early childhood education. Research shows us that what kids are exposed to in early childhood has a deep effect on them and enriches their learning and development,” McDonel explained as “Nellie’s Nest” played from her laptop speaker.

“Nellie the hen went to the pond.

She took a big drink, then wandered on.

Back at the nest, what did she find?