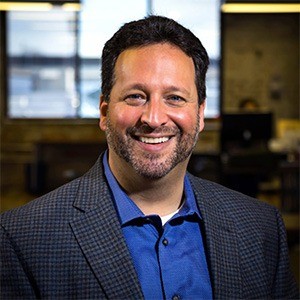 That common household condiment, in a roundabout way, was a key element that inspired the benefit corporation known as Impact Makers, a Richmond-based business that has contributed millions of dollars in profits and pro bono services to its community, its founder recently said.

Michael Pirron, Impact Makers’ founder and CEO, was the speaker at December’s Truist Leadership Program symposium, hosted via Zoom by the Davis College of Business and Economics and moderated by Dean Joy Bhadury, Ph.D., and Associate Professor of Management Tal Zarankin, Ph.D.

During that talk, Pirron discussed the unorthodox seeds that helped sprout his company.

As a business major and sociology minor at the University of Virginia in the 1980s, he became fascinated by a report he read regarding Newman’s Own, the food manufacturer and benefit corporation spearheaded by actor Paul Newman.

Newman’s Own began selling homemade salad dressing in 1982, with the intent of donating all its after-tax profits to a charitable foundation. The company’s wild success led it to branch out into its now-familiar popcorn, pizza, sauces and juice and, ultimately, to generate $550 million in contributions, according to its website.

But Pirron was an early adapter.

"I read a business case about this amazing company … and was really blown away," he explained. "Because it was a sociology experiment through business.

"You can kind of live your values and use business and solve problems at the same time."

Early on in his career, Pirron spent years as a senior officer for Anderson Consulting (since rebranded as Accenture). Though largely based in southern France, his position saw him work on projects in South Africa, Denmark and Switzerland.

While earning his Master of Business Administration at the Kellogg School of Management at Northwestern University, he drew on his longtime enthusiasm as the subject of an ethics paper – the idea of starting an information technology consulting company built on the Newman’s Own model.

“A company owned by the community, with all profits to charity, that would be more than just making some person in the corner office rich,” Pirron explained during his talk.

In 2006 he founded Impact Makers, a Virginia Benefit Corporation that does IT consulting, including advisory services, strategic planning, process improvement, organizational change management and data privacy, among other areas.

“We provide professional services at market prices. We compete like any other firm,” Pirron said. “We’re a for-profit company, but we’re governed by a volunteer board, owned by two public charities,” including the Community Foundation and Virginia Community Capital, “and we contribute our profits and strategic consulting to charitable community organizations that we partner with.”

Partners that Impact Makers works with must be secular, apolitical, local and operating as a 501(c)(3) organization.

“More importantly, the other criteria are they have to have projects they could use our help with, and they have to be large enough so we could really make an impact doing what we do well as a consulting firm, to give them pro bono projects,” he said.

Pirron estimates that over the past 16 years, Impact Makers has donated about $3.9 million in profits and services.

“To be honest, I kind of started Impact Makers selfishly because I wanted to do something I felt good about and working for large corporate America just wasn’t for me, but I had a certain income level I wanted to make, personally,” he said.

“I thought it was going to be me and a laptop and $50, and maybe it would get to a million dollars revenue.”

He now estimates that more than 3,000 benefit corporations are based in the United States, with others internationally in Africa, Asia, Australia and Europe, and he said it’s a concept that appears to be growing. The clothing company Patagonia, Inc., and the eyeglass manufacturer Warby Parker are well-known examples of businesses that are also public benefit corporations.

“A lot of people, especially young talent, want to work for socially responsible companies, so it’s a way to attract and engage talent that wants to work at social enterprises,” Pirron said.

“Everybody wants to find meaning in their work.”